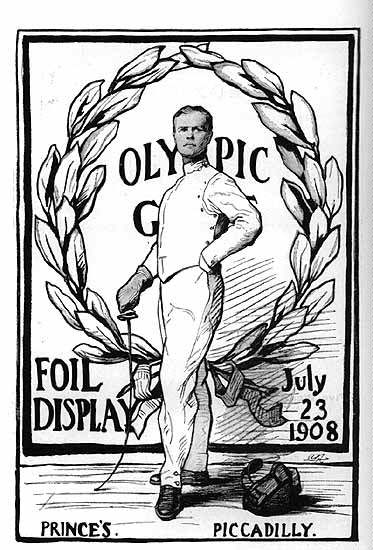 Size = 200
Nations participating = 22
Athletes participating = 2,008
(1,971 men, 37 women,)
Events = 111 in 22 s
Opening ceremony =
Closing ceremony = ,
Officially opened by = King Edward VII |Athlete's Oath=
Judge's Oath=
Olympic Torch=
Stadium =
The 1908 Summer Olympics, officially the Games of the IV Olympiad, were an which was held in in . These games were originally scheduled to be held in . At the time they were the fifth modern . However, the Athens Games of 1906 have since been downgraded by the and the 1908 Games are seen as the start of the Fourth Olympiad, in keeping with the now-accepted four-year cycle. The IOC president for this games was Baron Pierre de Coubertin.

Italian authorities were preparing to hold the games when erupted on , , devastating . Funds were diverted to the reconstruction of Naples, so a new venue was required. London was selected, and the games were held in White City alongside the Franco-British Exhibition, at the time the more noteworthy event. and were other candidates.

The , built in short time for the games, held 68,000 and was considered by some a technological marvel. The stadium track was three laps to the mile, not the current standard of 400 metres, with a pool for swimming and diving and platforms for wrestling and gymnastics in the middle. [The 1908 Olympic Games : Results for All Competitors in All Events, With Commentary by Bill Mallon, Ian Buchanan, page 5 [http://www.la84foundation.org/6oic/OfficialReports/Mallon/1908.pdf] ]

The distance from the start of the Marathon to the finish at the stadium was established at these games. The original distance of 25 miles was changed to 26 miles so the marathon could start at Windsor Castle and then changed again at the request of Princess Mary so the start would be beneath the windows of the Royal Nursery.

The games were surrounded by controversy. On opening day, following the practice introduced at the Intercalated Games of 1906, teams paraded behind s. However, the arrangement caused complications:
* Since Finland was part of the , the Finnish team were expected to march under the Russian rather than Finnish flag, so many chose to march without a flag at all.
* The Swedish flag had not been displayed above the stadium, so the members of the Swedish team decided not to take part in the ceremony.
* The flag had also not been displayed above the stadium before the opening, which is possibly the reason why the United States' flag bearer refused to dip the flag to the royal box. Though the flag was later dipped in the collective greeting of the royal family, , American team captain is often quoted to have said "This flag dips to no earthly king," though this quotation was only attributed to him 34 years later, some 24 years after his death. [http://www.la84foundation.org/SportsLibrary/JOH/JOHv7n3/JOHv7n3i.pdf] [ [http://www.bbc.co.uk/london/content/articles/2005/06/24/olympics_history_feature.shtml London Olympics 1908 & 1948] ] Despite international customs that encourage dipping the flag in respect to heads of state, since 1908 US flag bearers have not done so. [http://www.la84foundation.org/SportsLibrary/JOH/JOHv7n3/JOHv7n3i.pdf]

The 1908 Olympics also prompted establishment of standard rules for sports, and selection of judges from different countries rather than just the host. One reason was the 400 metre run in which the US winner was accused of interfering with the British runner. Part of the problem was the different definition of interference under British and US rules. The race was re-run, but the Americans refused to participate. The British runner, , won by running around the track on his own because three of the four original runners had been American.

The most famous incident of the games came at the end of the marathon. The first to enter the stadium, of Italy, collapsed several times and ran the wrong way. Not far from the finish, two officials took him by the arms and brought him to the line. As a consequence, after crossing the line he was disqualified. The medal went to American who was second but the glory went to Pietri. Since he had not been responsible for his disqualification, Queen Alexandra next day awarded him a gilded silver cup.

These Games were the first to include Winter events, as had originally been proposed for the Games. There were four events, although held months after other events.

For the first time the Olympic creed that "the most important thing in the Olympic Games is not to win but to take part" was publicly proclaimed, and its creator, a bishop from , uttered it at a service at on .

from , who won the gold medal for running deer shooting, became the oldest Olympic champion of all time, and set another age record by being 72 years and 279 days old during his triumph at the in .

were still not Olympic participants and the first athlete from these parts of Europe to win an Olympic gold was a British water polo player and swimmer, , originally from and . Nicknamed "Pavao", he was a member of the champion water polo team and the best 4 x 200m freestyle relay. He also won gold in water polo in Stockholm (1912) and in Antwerp (1920).

Tragically, Taylor "died on December 2, 1908, after his return to the United States, much regretted by all who met him [there] ."

The budget of the organizing committee showed a cost of GB£15,000; over one-third was labeled "entertainment expense". Donations were the major source of revenue; only 28% of income derived from ticket sales. Total receipts of £21,377 resulted in organizers claiming a profit. Construction of the , which cost the government about £60,000, was not counted.

22 sports, representing 24 sporting disciplines, were contested. Swimming, diving and water polo are considered three disciplines of the same sport, "aquatics". At the time, tug-of-war was part of athletics and the two different codes (association and rugby (union)) were listed together. The International Olympic Committee now considers tug-of-war a separate sport, as well as referring to association football as simply "football" and to rugby union as "rugby".