Death Is a Bitch

Death Is a Bitch

"Death Is a Bitch" is an episode from the FOX animated series Family Guy. It is the 13th episode of Family Guy to be aired. It was produced for season one, but aired in season two. Due to this fact, Meg is voiced by Lacey Chabert instead of Mila Kunis. Norm Macdonald guest stars as Death. The title is a play on the saying "life's a bitch".[citation needed]

This episode was originally rated TV-PG DLV, but in re-runs it has been rated TV-14 DLV.

Lois finds a lump on Peter's breast and worries that the lump could mean cancer, prompting Peter to see a doctor. Before his medical test results come in, Peter treats the time he has as if he were dying, setting up a yard sale for life insurance and even trying to buy himself a casket. When the results do come, the lump is revealed to be a benign fatty corpuscle. Peter decides to take a new outlook on life, but does not want to pay the hospital bill, so he declares himself deceased on the insurance form. 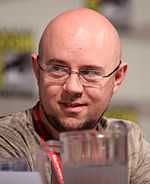 While the family celebrates the good news, Death shows up at his house to collect Peter. Despite Lois' protests, Death manages to get Peter to come with him. After a tearful farewell, Peter leaves with Death, but not before trying to make one last getaway. Death pursues him, attempting to touch him and kill him properly, but slips on a frozen puddle of ice and badly sprains his ankle.

Lois suggests that Death should stay at their house while his ankle heals so that she can persuade him to spare Peter, then realises that as long as Death is incapacitated everyone is immortal. Death warns Peter to say nothing about the fact that no one can die while he is injured, but Peter instead uses the knowledge of his invulnerability to jump from One Financial Plaza building, and live (conning them out of money); drink over 300 beers without succumbing to alcohol poisoning, and make fun of the toughest bikers at the bar without suffering from any injuries. The men get annoyed by Peter's comments ("Hey. Aren't you Richard Simmons?" and "Hey. Aren't you Richard Simmons' best friend, Richard Simmons?") and shoot him several times, but Peter does not die. Soon, one of their bullets hit Cleveland and one of the bikers shoots himself. All the bar patrons start shooting each other, and laugh upon discovering that they are still alive.

Stewie tries to kill Lois and he would have succeeded if the rules of Death applied; he realizes he needs to get Death healthy. As soon as Lois manages to convince Death to keep Peter alive, the fact that no one can die becomes top news.

Death is outraged but, instead of punishing Peter by killing him (having decided to make good on his promise to Lois), allows Peter to redeem himself by having him take over his job in order to prove to people they can still die. Peter is charged with killing the kids from Dawson's Creek who are on a crowded passenger plane. He fails to do so because he says "If I do, then I have nothing to watch on Wednesdays... other than the fine programs on FOX" and because most of the passengers were kids. Instead, Peter unwittingly kills two airplane pilots, proving people are not immortal, and forcing actress Karen Black to land the plane. The Griffins and Death part on good terms, though the family is greatly troubled as before Death leaves, he says "I'll be back. Really, really soon".

In his 2008 review, Ahsan Haque of IGN, rating the episode an 8.7/10, called "Death is a Bitch" "extremely enjoyable", and said that it features "plenty of memorable random jokes". He called the character of Death the highlight of the episode.[1]