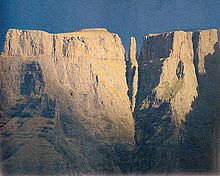 Mont-aux-Sources is a mountain range in Africa, forming one of the highest portions of the Drakensberg. A sheer wall of 1,000 vertical ft., known as the Sentinel, can be found here. A basalt plateau which lies at an elevation of about 10,000 feet (3,050 m), it is mostly within Lesotho.[1]

Mont-Aux Sources was so named by the French missionaries who visited the region in 1836. The highest point itself is an uninteresting peak 7 km from the Drakensberg escarpment and attains an altitude of 3,282 m. The mountain is the source for three major rivers, (hence the name Mont-aux-Sources), the Tugela, Vaal River[dubious – discuss] [The Vaal river does not rise here - but some 400km east near Ermelo]and Orange River. The Vaal River flows north and eventually into the Orange River, which in turn flows into the Atlantic Ocean on the West coast of Southern Africa, whilst the Tugela River flows into the Indian Ocean on the East coast of the subcontinent. 7 km from the source, the Tugela plunges 947 m in a series of falls in the Royal Natal Drakensberg Park. This is the second highest series of falls in the world.

The peak is accessible from the Sentinel Car Park near Witsieshoek, via chain ladders.