Ortega is a Spanish surname. In the 9th century a Saint Raymundo Ortega of Bejar was recorded to be in Salamanca, Spain. A baptismal record in 1570 records a de Ortega "from the village of Ortega". There were several villages of this name in Spain. The toponym derives from Latin urtica, meaning "nettle".

Some of the Ortega spelling variants are: Ortega, de Ortega, Ortegada, Ortegal, Hortega, Ortiga, Ortigueda, Ortigueira, Ortigosa, Orreaga, etc. A cognate surname in Italian is Ortica, in Romanian Urzică, in French Ortie, all from Latin urtica.

Roberto Faure, coauthor of the Diccionario de Apellidos Españoles, states that Ortega is derived from the noun ortega, a spelling variant of the modern Castilian Spanish ortiga "nettle". The name of the plant is found as a toponym in various places in Spain, such as Ortega (Burgos), Ortega (Jaén) or Ortega (Monfero, La Coruña). Mexican author Gutierre Tibón advanced the alternative theory that the name derives from Ortún, earlier Fortún, from the Latin name Fortunius with an added suffix "-eca".[1] The Dictionary of American Surnames additionally states that the name may derive from ortega: "black grouse."

The first Bishop of Almería, Juan de Ortega, died in the early 16th century, while another early occurrence is found in the baptismal record of Phelpa de Ortega, dated 2 March 1570 at Santa Maria Magdalena, Valladolid, Spain, during the reign of King Philip II of Spain. Other early records are found in Carrión de los Condes, Palencia. The name subsequently appears throughout Spain, especially in Castile, Andalusia and Murcia, as well as México and Latin America.

According to the Diccionario de Heráldica Aragonesa by Bizén d'O Río Martínez, there were two Aragonese lines using the surname, one of which was infanzon. Both lines originated in Cinco Villas and bore coats of arms that were variants of each other. One line is in Gallur in the 18th century, and in Tauste in the 19th century. The other is attested from 1626 in various locations in Aragón. 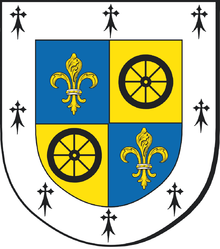 There were two arms-bearing families called Ortega. Their coat of arms were as follows: