Museum of Fine Arts of Seville

Museum of Fine Arts of Seville 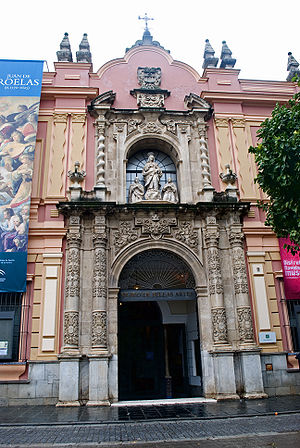 Fachade of Museum of Fine Arts of Seville

The Museum of Fine Arts of Seville or Museo de Bellas Artes de Sevilla is a museum in Seville, Spain, a collection of mainly Spanish visual arts from medieval period to the early 20th century, including a choice selection of works from the so-called Golden Age of Sevillian painting during the 17th century, such as Murillo, Zurbarán, Francisco de Herrera the younger, and Valdés Leal.

The museum was founded in 1839, after the desamortizacion or shuttering of religious monasteries and convents, collecting works from across the city and region. Originally, the site held the convent of the Order of the Merced Calzada de la Asunción, founded by St. Peter Nolasco during the reign of King Ferdinand III of Castile. Extensive remodeling in the early 17th century was led by the architect Juan de Oviedo y de la Bandera.

Painters and sculptors of Museum