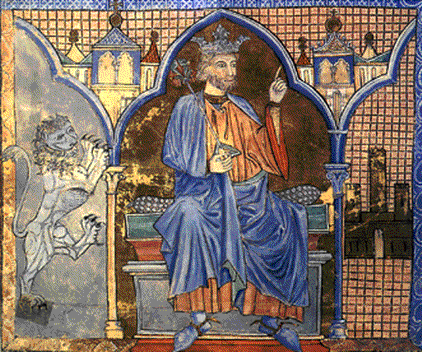 Saint Ferdinand III (July 30 or August 5, 1199 &ndash; , ), was the from 1217 and from 1230. Through his second marriage he was also . He finished the work done by his maternal grandfather Alfonso VIII and consolidated the . In 1231, he permanently united Castile and León. He was in 1671 and, in Spanish, he is Fernando el Santo or San Fernando.

St Ferdinand was the son of and . He was born at the (, ) in 1198 or 1199. His parents were divorced by order of in 1204. Berenguela took their children, including Ferdinand, to the court of her father. In 1217, her younger brother Henry I died and she succeeded him to the Castilian throne, but she immediately surrendered it to her son Ferdinand, for whom she initially acted as regent. When Alfonso died in 1230, Ferdinand also inherited León, though he had to fight for it with Alfonso's designated heirs, Sancha and Dulce, the daughters of his first wife. He thus became the first sovereign of both kingdoms since the death of Alfonso VII in 1157.

Early in his reign, Ferdinand had to deal with a rebellion of the . He also established a permanent border with the by the (1244).

St Ferdinand spent much of his reign fighting the . Through diplomacy and war, exploiting the internal dissensions in the Moorish kingdoms, he triumphed in expanding Castilian power over southern . He captured the towns of in 1233, Córdoba in 1236, in 1246, and in 1248, and occupied in 1243, thereby reconquering all save , whose king nevertheless did homage to Ferdinand. Ferdinand divided the conquered territories between the , the Church, and the nobility, whom he endowed with great s. When he took Córdoba, he ordered the "" to be adopted and observed by its citizens, and caused it to be rendered, albeit inaccurately, into Castilian.

The capture of Córdoba was the result of an uneven and uncoordinated process whereby parts (the Ajarquía) of the city first fell to the independent of the to the north, which Ferdinand had not at the time subjugated.

On the domestic front, he strengthened the and founded the current Cathedral of Burgos. He was a patron of the newest movement in the Church: that of the s. Whereas the s and then the s and s had taken a major part in the Reconquista up til then, Ferdinand founded Dominican, , Trinitarian, and houses in Andalusia, thus determining the religious future of that region. Ferdinand has also been credited with sustaining the "" in Andalusia. [Ibid, 182.]

The "" asserts that, on his death bed, Ferdinand commended his son "you are rich in lands and in many good vassals &mdash; more so than any other king in Christendom," probably in recognition of his expansive conquests. [Ibid, 1.] He was buried within the by his son . His tomb is inscribed with four languages: Arabic, Hebrew, Latin, and an early incarnation of Castilian. [Menocal, 47.] St Ferdinand was by in 1671. Several places named were founded across the .