and section 16-3-213 Brewers or beer importers not to retail beer—small brewery exceptions:[2]

Licensing
The roots of Montana’s liquor licensing system date back to 1933, when Prohibition ended and taverns sprung up throughout the state. In 1947, the state enacted a quota system, allowing one tavern for every 1,500 residents of a city. But the taverns in existence at the time were grandfathered in, and what the state considers to be an excess of liquor licenses now exists in Montana cities.[3] 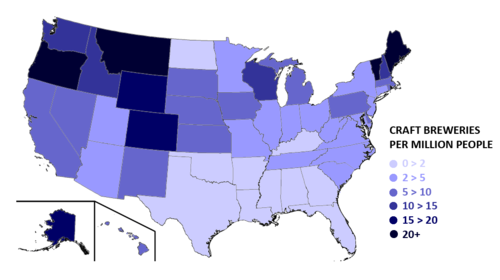 With a plan to open as early as the end of January 2011, 406 Brewing Company will become one of only two breweries located within the city limits of Bozeman, Montana (the other being Bozeman Brewing Company). The brewery became a member of the Montana Brewers Association in Sept. 2010 and as of Dec. 2010 the owners were still preparing the location's interior, logo, and deciding which of their brews will enter the market first.[10]

Angry Hanks Brewing is located in a former service station in a part of Downtown Billings, Montana known locally as the "Brewery District". It was opened in 2006 by Tim Mohr who had worked as a brewer at Red Lodge Ales for five years.[11] The Angry Hank from which the brewery gets its name is not part of the organization, but instead a Miller Genuine Draft drinking friend of the family who always seemed angry. The idea to call the brewery Angry Hanks came when someone in attempt to console "Hank" said to him " Don't be angry Hank" just as Mohr and his family were having troubles deciding on a name for the then proposed establishment.[12]

Angry Hanks does not bottle its beer and sells about 90% of its beer on site. Popularity of the relatively new brewery though, credited in part by Mohr to the taproom's hours being coincidental with Happy Hour and nearby downtown hotel tourists, has led to stretched supply. Given such, the owner is considering expanding in the near future.[12]

Only German Brewery in the Rockies
Bayern Brewery was opened in 1987 as the "only German brewery in the Rockies" and today is the oldest operating brewery in Montana. Brewers Thorsten Geuera and Jürgen Knöller are both from Germany and use all German equipment and recipes.[14] Knöller was born and raised in Bavaria, German (Bayern in German and hence the company's name) where he also an apprentice and graduated as a professional brewer. He graduated as a Masterbrewer from Doemans' Masterschool for Brewing and Soft Drink Technology in Munich in 1987 after which he became the brewmaster for Bayern Brewing.[15]

Reinheitsgebot
All beer at Bayern is brewed according to Reinheitsgebot, otherwise known as the German Beer Purity Law or the Bavarian Purity Law. The law, originating in the city of Ingolstadt in the duchy of Bavaria, Germany in 1516[16] concerns the standards for the sale and composition of beer. In the original text, the only ingredients that could be used in the production of beer were water, barley, and hops. The law also set the price of beer at 1-2 Pfennig per Maß. Size and Expansion
At almost 10,000 barrels of brew a year, Bayern is the second largest brewery in Montana after Big Sky Brewing. Knöller has had facilities at three different locations, but the most recent move in 2002 was built so that it could be expanded to produce up to 100,000 barrel per year if needed.[14]

Troutslayer
In 2007 Bayern began to phase out the name Trout Slayer for one of its best-selling beers. For much of the beer's history it was known simply as Light Wheat Ale until it leased the name Trout Slayer from Kalispell businessman Brian Beck. To avoid continued high licensing fees as well as begin anew with a name more in line with Knöller's philosophy of environmental preservation, the name was changed to Dancing Trout.[17][18] The new Dancing Trout also became the Official Beer Sponsor of Montana’s Trout Unlimited with a portion of its sales' profit donated to help preserve trout and their habitat.[19] A new Trout Slayer Ale with a different recipe was released by Big Sky Brewing Co. later that year.[20]

Monte Dolack
Montana artist Monte Dolack opened his first studio in 1974 and is known best for his paintings "blending mythology, technology, and elements from nature" richly "infused with a sense of humor and irony."[21] He was first commissioned by Knöller to create labels for Bayern in 1987 and has since designed the labels of some of the breweries most notable brands: Doppel Bock, Pilsener, Dancing Trout, Maibock and Oktoberfest.[22]

Located at the edge of Eastern Montana, Beaver Creek Brewery describes itself as "an oasis in a desert of no microbreweries. As of 2008, the brewery was brewing at its capacity of about 200 barrels a year, and, despite its low production, has a distribution area spanning hundreds of miles because of the low population density of the region.[24]

The Brewery was set up in Wibaux's historic old business district with equipment salvaged from the former Milestown Brewing Company in a former grocery store that had been closed since 1986.[25]

Though Montana had a robust early brewery history, many notable companies were severely weakened by Prohibition and others finished off by the expansion of national breweries.

Founded: 2008[51]
Previous Incarnations: - Montana State Brewers Association (est. 1997)
Website: - http://montanabrewers.org Purpose: - Promotion of the production and sales of the freshest and highest quality Montana made beers through education, public awareness and support for their products, profession, and history while documenting their economic impact and legal responsibilities throughout the state of Montana.