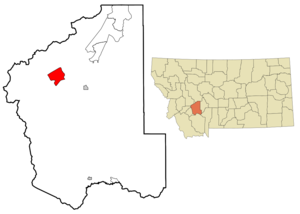 Basin is a (CDP) in Jefferson County, , . It lies about convert|10|mi|km|0 southeast of the in a high narrow canyon along Interstate 15 about halfway between Butte and Helena. Basin Creek flows roughly north to south through Basin and enters the Boulder River on the settlement's south side. The population was 255 at the 2000 census.

Archaeologists have discovered evidence of human habitation from 10,000 years ago at a site near Clancy, convert|20|mi|km|0 from Basin. From about 2000 BCE through the mid-19th century, nomadic tribes hunted in the grassy valleys that trend east, away from the and into the plains. By the time miners found gold in the streams in and near Basin, most of the these tribes of Indians had been forced onto reservations by the U.S. government.

Basin rests above the , the host rock for many valuable mineral ores found in this part of Montana. After the town became a hub of gold and silver mining, Basin's population peaked at about 1,500 in first decade of the 20th century but gradually declined as the mines were depleted. Abandoned mining equipment, closed or barricaded mine portals, and the ruins of a and ore concentrator remain in Basin in the 21st century.

Historic buildings from Basin's heyday form much of the core of the CDP's small business district, which includes a fire station, a post office, two restaurants, a bar, a commercial gallery, small specialty shops, and the nonprofit Montana Artists Refuge. Basin has a small elementary school, its own water system, and a low-power radio station. Local volunteers and elected trustees provide limited services to the settlement, but it relies on the government of Jefferson County, Montana, for law enforcement and other services.

Basin, part of the Helena Micropolitan Statistical Area, is at coor dms|46|16|36|N|112|16|4|W|city (46.276564, -112.267756).GR|1 It lies at an elevation of convert|5335|ft|m|0 above sea level along Interstate 15 about convert|27|mi|km|0| north of Butte and convert|35|mi|km|0 south of Helena in the narrow canyon of a small river. Basin Creek flows south through the center of Basin to its confluence with a larger stream, the Boulder River, which flows east along the south side of Basin. No paved roads except the interstate highway, which runs along the river canyon, connect Basin to other towns. About convert|10|mi|km|0 upstream on Basin Creek lies the . According to the United States Census Bureau, the CDP has a total area of mi2 to km2|12.8|precision=1, all land.

In the late Cretaceous (roughly 81 to 74 million years ago), molten rock () rose to the Earth's surface in and near what later became Jefferson County and eventually formed an intrusive body of granitic rock up to convert|10|mi|km|0 thick and convert|100|mi|km|0 in diameter. This body, known as the , extends from Helena to Butte, and is the host rock for the many valuable ores mined in the region. As the granite cooled, it cracked, and hot solutions infiltrated the cracks to form mineral veins bearing gold and other metals. Millions of years later, weathering allowed gold in the veins to wash down to the gravels in Basin Creek, Cataract Creek, and the other creeks near Basin, as well as the Boulder River. [cite web | title = Math and Science Initiative: Elkhorn Volcanoes and the Boulder Batholith | publisher = State of Montana, Office of Public Instruction | url =http://mathscience.mt.gov/Elkhorn.html| accessdate = 2007-12-17 ]

The Basin area is underlain by the of the Boulder Batholith. The batholith is overlain by from the Period (roughly 65 million to 1.8 million years ago) and from the late Period. The andesite and monzonite are cut by dikes of dacite and . [cite web | title = Historic Narratives, Boulder | publisher = Montana Government, Department of Environmental Quality | month = August | year = 2004 | url =http://www.deq.state.mt.us/abandonedmines/linkdocs/techdocs/75tech.asp | accessdate = 2007-12-17 ]

Archeologists think it likely that the first people to live in Montana crossed from Asia to North America over the that existed during the last major about 12,000 years ago. Because the middle of the continent was covered with sheets of ice, people who migrated south did so on trails along the edges of melted by seasonal warming. One such trail, called the Great North Trail, is thought to have followed the into Montana, passing close to Helena, convert|24|mi|km|0 north of Basin, and continuing into the east-central part of the state. Evidence of these early Paleo-Indians or Clovis people has been found at three sites, one of them the McHaffie site near Clancy about convert|20|mi|km|0 north of Basin. The age of the Clancy artifacts is estimated to be 10,000 years. The Clovis people are thought to have disappeared in about 4,000 to 5,000 BCE when the Montana climate became more dry and would not support the animal populations the Clovis needed to survive.

About 2,000 years ago, a new prehistoric people known as the Late Hunters appeared in Montana, thriving on a (buffalo) population living in open grassy areas on the plains and in river valleys. The earliest tribes are thought to have been the Kootenai, who stayed west of the Continental Divide, and the Flathead (Salish), and Pend d'Oreilles, who ventured east of the mountains into and east of the country, convert|46|mi|km|0 southeast of Basin. In the 1600s, the Crow entered Montana from the east and the from the south. Pressed by other tribes retreating west from white European settlers, the moved into Montana around 1730. Acquiring horses and firearms, and numbering about 15,000, they formed alliances with other incoming tribes, the and the , and by the mid-1700s dominated the state. When the white explorers Lewis and Clark traveled up the to Three Forks, they found only Blackfeet and Blackfeet allies. Heavily dependent on bison, the nomadic life of the Blackfeet "came to an abrupt end in the early 1880s when the buffalo became almost extinct."

During the 1870s, a few years after the first white miners began looking for gold near Basin, the last large-scale battles between the U.S. government and the Indians took place in Montana. The (also known as the Baker Massacre), occurred in 1870 about convert|150|mi|km|0 northeast of Basin. Others, the and the , were fought in 1876 about convert|250|mi|km|0 from Basin in the southeastern part of the state. By then, most first peoples had been moved to reservations, which were far from Basin.

The town of Basin began as a 19th century mining camp near the confluence of Basin Creek with the . Gold deposits at the mouth of Cataract Creek, about convert|0.5|mi|km|1 downstream of Basin were reported as early as 1862. Prospectors staked claims and built cabins, and within a few years extended the full lengths of Cataract and Basin Creeks. When a settlement was established in Basin, the buildings at the mouth of Cataract Creek were gradually moved to Basin, and the Cataract camp was abandoned.

Searches for the veins on both creeks succeeded by the 1870s and eventually led to significant lode mining at the Eva May, Uncle Sam, Grey Eagle, Hattie Ferguson, and Comet mines in the Cataract Creek district and the Bullion, Hope, and Katy mines in the Basin Creek district. By 1880, the settlement at Basin became the local source of supplies for mines and miners.

Two mines, the Katy and the Hope, owned serially by several different companies between the mid-1890s and the mid-1920s, contributed to Basin's prosperity. In 1894, the Basin and Bay State Mining Company, organized by two brothers named Glass, began expanded operations at these mines. However, flooding and fires caused both mines to close by 1896; the Glass brothers lost control of the property, and the mines went idle.

An unpublished manuscript on file with the Montana State Historical Society describes life in Basin between 1906 and 1910 in great detail. Two railroads, the Northern Pacific on the north side of the Boulder River, and the Great Northern on the south side, served the city; both had depots and warehouses in Basin and carried passengers as well as freight. The Glass brothers' smelter had been set up on the north side to process concentrated ore delivered by rail from out of town or from the mills on the south side. Infrastructure included a weight scale for ore cars and an overhead tram to carry ore across the river from the reduction mill to the smelter. Although the smelter was a "massive unit" equipped with furnaces, conveyors, and machinery ready for operation, it "never turned a wheel".

While the smelter sat idle, mining activity continued on the south side of the river in the Hope-Katy mine complex, at the Hope Mill, which crushed and separated ore, and at the Basin Reduction Works. s carried water from upstream on Cataract Creek and Basin Creek to a storage reservoir in town and supplied water to the mills as well as the town's fire hydrants. A separate flume carried water to the mills from upstream on the Boulder River. At the Basin Reduction Works, Corliss steam engines, driven by the coal-fired boilers, provided power to run the mine hoists and the mill machinery, and an electric generator powered by a water wheel made electricity for factory lights and the arc lights at Basin's street intersections. Surplus were discharged into the river and into a dam built for the purpose downstream of Basin.

In addition to homes, Basin structures between 1906 and 1910 included a dance pavilion, a grandstand, a baseball diamond, and a playground near the confluence of Basin Creek with the river. A footbridge connected the playground with a picnic area on the south side of the river. Meeting places included churches, a union hall, and a two-story building shared by the , the , the Masons, and Eastern Star. Among the town's businesses were a hardware store, a bakery, livery stables, several "units of harlotry", a blacksmith shop, a brewery specializing in Basin Beer, a sawmill, and a dairy barn from which "milk was delivered in five-pound buckets", sometimes with covers.

The most extensive and successful mining of the Hope-Katy vein began in 1919, when the Jib Consolidated Mining Company began work on the property. When this company acquired the mines, they comprised convert|3500|ft|m|0 of workings. Over the next five years, Jib expanded these to more than convert|15000|ft|m|0, and in 1924 the company became the largest gold producer in Montana. In that year, the combined Jib mines produced about convert|33000|oz|g| of gold, convert|182000|oz|g| of silver, convert|282000|lb|kg of copper, and convert|199000|lb|kg of lead.

In 1975, the Basin community formed water and sewer districts and, using federal grants to cover about 60 percent of the costs, built a water delivery, sewage, and waste-handling system.

In 1999, the Environmental Protection Agency added the Basin mining area to the National Priorities List because of mining-waste problems in and near town. The mining area comprised the watersheds of Basin and Cataract Creek and part of the Boulder River. Contaminants included , copper, , lead and other metals. Cleanup of the mining wastes at the Buckeye-Enterprise, Crystal and Bullion mines in the Basin Creek and Cataract watersheds was completed in 2002, and the removal of mine waste from Basin was completed in 2004. [cite web | title = Superfund Program, Basin Mining Area | publisher = U.S. Environmental Protection Agency | year = 2007 | url = http://www.epa.gov/region8/sf/mt/basin/index.html | accessdate = 2008-01-15 ]

Almost opposite the Hope-Katy complex on the south side of the Boulder River in Basin was the Katy Extension Mine on the north side. It produced ore from part of the Hope-Katy lode that had been displaced about convert|800|ft|m to the north by faulting.

There were 113 households out of which 29.2% had children under the age of 18 living with them, 51.3% were married couples living together, 5.3% had a female householder with no husband present, and 38.9% were non-families. 32.7% of all households were made up of individuals and 6.2% had someone living alone who was 65 years of age or older. The average household size was 2.26 and the average family size was 2.93.