The Mega-CD (メガCD, Mega Shī Dī?) is an add-on device for the Mega Drive video game console, designed and produced by Sega and released in Japan, Europe, Australia, New Zealand, and South Africa. The device was also released in North America under the name Sega CD, for the Sega Genesis. The device adds a CD-ROM drive to the console, allowing the user to play CD-based games and providing additional hardware functionality. It can also play audio CDs and CD+G discs.

The development of the Mega-CD was confidential; game developers were not made aware of what exactly they were working on until the add-on was finally revealed at the Tokyo Toy Show in Japan. The Mega-CD was designed to compete with the PC Engine CD (TurboGrafx-16 CD) in Japan, which had a separate CD-ROM drive. 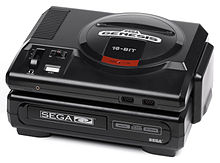 The Sega CD had been announced at the Chicago CES in June 1992. The advertising boasted full-motion video clips and CD audio soundtracks, although because of the Genesis's limited color palette and limited data bandwidth, motion video was heavily dithered and usually limited to a small rectangle in the centre of the screen.

Some European countries (Spain for instance), would not see a release of the original Mega-CD, but the Mega-CD 2.

The Sega CD 2 was launched in the Brazilian market at exactly the same time as the North American release. Since the original Sega CD was never released there, it was simply called "Sega CD". However, because several Mega-CD units imported from Japan were already in the market, it was informally known as "Mega-CD".[citation needed] It was manufactured locally by Tec Toy. 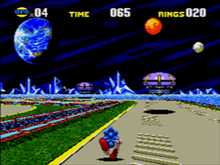 Seeing the technology already in use for laserdisc classic arcade, and even a few titles on the PC Engine, video seemed to be the best choice at the time. So they focused on "FMV" games. Sega started off licensing and producing primarily "full motion video" games similar to earlier Laserdisc games, that were initially praised by reviewers (for example: Gamepro's "SWAT PRO" magazine initially gave Sewer Shark a perfect score, then later re-reviewed it with a much lower score as their feelings toward the system changed)[citation needed]

Eventually, most FMV games became universally panned by game reviewers, no matter which console the game was designed for.[citation needed] The Mega CD's limited 512-color palette (of which a maximum of 64 colors were displayable simultaneously), combined with the processor not being well-suited for video, resulted in grainy, dithered images running at a lower framerate and resolution in most games.[citation needed]

Another criticism of the software library was that most titles consisted of "shovelware", in which a developer takes an existing title and adds minor new content (usually a CD audio soundtrack, or video sequences) while not expanding the original game itself.[citation needed] Few titles received major changes, but two exceptions were Earthworm Jim which featured additional levels and game changes, and The Amazing Spider-Man vs. The Kingpin, which featured many changes, which drastically restructured the game, making it less linear, and adding animated cut scenes.[citation needed]

Despite a somewhat lackluster library of games, the console introduced at least one notable franchise.[citation needed] The Lunar series, despite the relatively narrow circulation the two titles on the Mega-CD received, was critically acclaimed and became a cult classic, with both games receiving remakes for the PlayStation and Sega Saturn in the late '90s; and a prequel to the series for the Nintendo DS in 2005. Another notable title was the cult-classic Snatcher, a cyberpunk digital comic released by Konami and designed by Hideo Kojima. Though Snatcher was already available on several platforms, the Mega-CD version was the only one released in English.

One exclusive game that was published for the Mega-CD is the now-famous Sonic the Hedgehog CD, or Sonic CD. Sonic CD has been praised for its visual style, superior CD sound, and an innovative time-travel mechanic, allowing players to explore four versions of each stage.[citation needed]

The Mega-CD was awarded Best New Peripheral of 1992 by Electronic Gaming Monthly.[4] 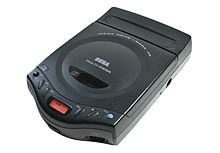 The following models were released:

The Mega-CD specifications are as follows:[6] 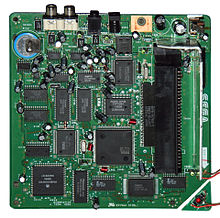 The main CPU is a 12.5-MHz 16-bit Motorola 68000 processor. The Mega Drive has the same processor, but at a lower clock rate of 7.67 MHz (NTSC) / 7.61 MHz (PAL). In the combined system, both processors run concurrently for Mega-CD games, and the Mega-CD processor is idle for Mega Drive games. 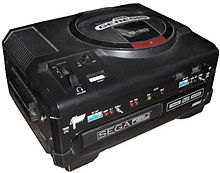 From the CD player, it is also possible to enter a utility to manage items in the game backup RAM and RAM carts, or to start an inserted Mega-CD game disc (without resetting the console). On all second revisions of the Mega-CD boot ROM, if the user has a Mega Mouse or Sega Mouse plugged into control port 2, this may be utilized as a pointing device instead of using a traditional control pad. If no disc is inserted, it prompts on screen for one while playing the title animation and music. Except when a game disc is in the drive, if no button is pressed at the Mega-CD title screen, the animation and music will loop indefinitely.

In the original Mega-CD model which has the motorized front-loading tray, pressing reset while the title screen is displayed will open the tray (eject the disc) or close it (load the disc). At all other times (without a cartridge inserted), pressing reset will return to the Mega-CD title screen, but will not open the tray. It is impossible to open the motorized tray with a cartridge inserted, as the BIOS which controls it will not run then. In the later version of the Mega-CD with the top-loading drive, resetting or powering off may leave the disc spinning, and the only way to stop the disc before opening the tray is to switch off the system and wait 15 to 30 seconds for it to spin down (under the light friction of the spindle motor bearings) or to enter the CD player mode and play or pause the disc, then stop (in BIOS v2.00, maybe others). After the disc can be heard to spin down while the lid is closed, whereas just pointing to Stop and pressing a button will not spin down the disc when the player is not in play or pause mode.

The Mega-CD adds the Ricoh RF5C164 chip, which gives 8 extra sound channels, all capable of sampled sounds, to the Mega Drive's YM2612 and SN76489 chips (which provide a total of 18 channels, with the YM2612's 6 channels and PSG's 4). The drive did not have a board-level connection with the audio and required an additional connection to mix the sounds from the console and the drive (later version addressed this deficiency).