The Dreamcast (ドリームキャスト, Dorīmukyasuto?) is a 128-bit video game console which was released by Sega in late 1998 as the successor to the Sega Saturn. It was the first entry in the sixth generation of video game consoles, preceding Sony's PlayStation 2, Microsoft's Xbox and the Nintendo GameCube.

Sega discontinued the Dreamcast in March 2001[1] and withdrew entirely from the console hardware business, making it the company's final console. Support of the system continued in Europe and Oceania until the end of 2002,[5] while in Japan, consoles were still sold until 2006 and new licensed games continued to be released.[6] According to Bernie Stolar, former President and CEO of Sega of America, the Dreamcast was discontinued because the new chair of Sega wanted the company to focus on software.[7]

Despite its short lifespan, the Dreamcast has garnered cult status for its history and features. It was widely hailed as ahead of its time, and is still held in high regard for pioneering online console gaming—it was the first console to include a built-in modem and Internet support for online play.[8][9] As of 2011, the console is still supported through various MIL-CD independent releases.[10]

Main article: History of the Dreamcast

In 1997, the Sega Saturn was struggling in North America, and Sega of America president Bernie Stolar was pressing Sega's Japanese headquarters to develop a new platform. Two competing teams were tasked with developing the console–a skunkworks group headed by IBM researcher Tatsuo Yamamoto and another team led by Sega hardware engineer Hideki Sato.

Sato and his group chose the Hitachi SH4 processor architecture and the VideoLogic PowerVR2 graphics processor for their prototype. Yamamoto and his Skunkworks group also opted for the SH4, but with 3dfx hardware. Initially, Sega decided to use Yamamoto's design and suggested to 3Dfx that they would be using their hardware in the upcoming console, but Sega later opted to use the PowerVR hardware of Sato's design. This was attributed to 3Dfx leaking details and technical specifications of the then-secret Dreamcast project when declaring their Initial Public Offering[11] in June 1997, a move which readers on Gamespy.com named "one of the dumbest mistakes in video game history".[12] Sega's shift in design prompted a lawsuit by 3dfx that was eventually settled.[13][14]

With Sega's machine, no operating system resides in the device until it is loaded in on a disc with each game. The advantage, Sega executives say, is that developers can always ship products that use the version of an operating system with the newest features and performance enhancements. The operating system used by some Dreamcast titles was developed by Microsoft after two years of work with Sega. It was an optimized version of Windows CE supporting DirectX. According to Richard Doherty, president of Envisioneering Group, "Microsoft had initially wanted Windows CE to be Dreamcast's main operating system. It isn't." [15] The Dreamcast's boot-up sequence was also composed by accomplished Japanese musician Ryuichi Sakamoto.[16]

The Dreamcast was released in November 1998 in Japan; on September 9, 1999 in North America and on October 14, 1999 in Europe and November 30, 1999 in Australia. Despite problems with the Japanese launch,[9] the system's launch in the United States was successful. In the US alone, a record 300,000 units had been pre-ordered[9] and Sega sold 500,000 consoles in just two weeks (including a record 225,132 sold during the first 24 hours). In fact, due to brisk sales and hardware shortages, Sega was unable to fulfill all of the advance orders. Sega confirmed that it made US$98.4 million on combined hardware and software sales with Dreamcast following the September 9, 1999 launch.[17] Four days after its launch in the US, Sega stated that 372,000 units were sold bringing in US$132 million in sales.[9]

Launch titles such as Soul Calibur, Sonic Adventure, Power Stone, Hydro Thunder, Marvel vs. Capcom, The House of the Dead 2, and NFL 2K helped Dreamcast succeed in the first year.[18] Sega Sports titles helped fill the void left by a lack of Electronic Arts sports games on the system.[19] Dreamcast sales grew 156.5% from July 23, 2000 to September 30, 2000 putting Sega ahead of the Nintendo 64 in that period.[20] However, the launch of Sony's PlayStation 2 that year marked the beginning of the end for the Dreamcast.[21]

On January 31, 2001, Sega announced that they were discontinuing Dreamcast production by March of that year.[1] The last North American release was NHL 2K2, which was released in February 2002. With SEGA announcing no plans to develop a next-generation successor to Dreamcast, this was Sega's last foray into the home console business.

Although production of the Dreamcast ended in 2001, Sega of Japan continued selling refurbished systems and releasing new games until 2007. Many of the games were initially developed for Sega's NAOMI arcade hardware, including Sega's final first-party Dreamcast game, Sonic Team's Puyo Puyo Fever, released on February 24, 2004.[6]

Three other NAOMI games Exzeal, Illmatic Envelope: Illvelo and Mamonoro were supposed to be ported to the Dreamcast, however Sega abruptly decided to discontinue the production of GD-ROM's.[22]

The Dreamcast continues to be supported by homebrew developers. Thousands of freeware and open source applications have been released since the end of production. Even after 2007, new commercial games were released (now on CD-ROM instead of GD-ROM and without official SEGA license), most notably Rush Rush Rally Racing and Last Hope.

The Dreamcast introduced numerous features that would be standard to future consoles. All models were shipped with modems allowing users to browse the net and play games online via dedicated server through SegaNet (Dreamarena in Europe), a precursor to services such as Xbox Live. ChuChu Rocket! was Sonic Team's first online multiplayer game. Alien Front Online was the first online console game to feature live in-game voice chat. It also featured such early downloadable content, such as items and missions for games such as Phantasy Star Online and Skies of Arcadia. Jet Set Radio, a Dreamcast original, popularized cel-shaded graphics. Shenmue had introduced a game with vast scope and Seaman was one of the first virtual pet games for a console.[23] In 2009, IGN named the Dreamcast the 8th greatest video game console of all time, out of a field of 25.[24]

Independent commercial games such as Feet of Fury, Last Hope and DUX have also been released.[25] On June 10, 2010, at E3 Sega announced that Dreamcast titles would soon be available on Xbox Live Arcade and PlayStation Network. The first two titles to be released are Sonic Adventure and Crazy Taxi, followed by Sega Bass Fishing and Space Channel 5 Part 2.[26] 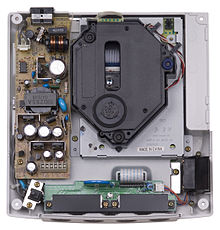 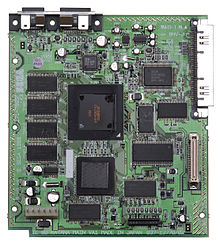 Mainboard of a Dreamcast console. 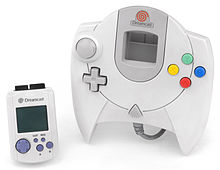 The Dreamcast controller has two dock connectors for use with multiple accessories, like the VMU
Main article: Dreamcast accessories

One of the most notable accessories for the Dreamcast was the VGA adapter, allowing Dreamcast games to be played on computer displays or High-definition television sets in 480p (progressive scan) In addition, other accessories included a vibrating jump pak and a VMU accessory which was a memory card with a small screen that provided a variety of functions for various games. Also made available for specific games were the arcade stick and light gun controllers.

In most regions, the Dreamcast included a removable modem. The original Asia/Japan model and all PAL models had a transfer rate of 33.6 kbit/s, while consoles sold in Japan and the US after September 9, 1999 featured a 56 kbit/s modem. Brazilian models manufactured under license by Tec Toy did not include a modem, which was available separately. The regular modem could be replaced with a broadband adapter that was sold separately.

As of November 2007, the Dreamcast has 688 official games available in its library, and unofficial, independent games continue to be released by certain companies.[31] Games were sold in jewel cases. In Europe, the jewel cases were twice as thick as their North American counterparts, possibly to allow more space for thick, multilingual instruction manuals. Unlike US jewel cases usually featuring one door, European cases had two doors and could store two disks.

Among the official games are online games that could be played over the Internet. The online servers were run by SegaNet, Dreamarena, and GameSpy networks. Online game support was particularly popular in Japan, with releases of network compatible games such as Tech Romancer and Project Justice. Web browsers were developed by independent companies such as Planetweb to allow access to web sites and included features like Java, uploads, movies, and mouse support. Dreamarena came with games such as Sonic Adventure and ChuChu Rocket!.

There are six games that can still be played online. Quake III Arena and Maximum Pool are still accessible via various servers. 4x4 Evolution and Starlancer are still online through Gamespy. SEGA Swirl can be also be played online with its play by e-mail game. Phantasy Star Online has private servers. 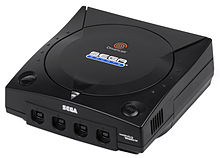 Due to its short production span, only a few official models were released. The primary models released in 1999 featured a grey tint. The later model disc drives added more protection against piracy.[citation needed]

In PAL Regions, the Dreamcast logo was blue so as to avoid a trademark dispute with German video game/DVD publisher Tivola, who already used a red swirl as their company logo.[citation needed]

Some special Dreamcast models were released in certain regions. In North America, a limited edition black Dreamcast was released with a Sega Sports logo below the Dreamcast logo on the lid with matching Sega Sports-branded black controllers. Electronics Boutique offered a blue Dreamcast through its website.

There were many Japan-only models made, including a Sakura Taisen version. A Hello Kitty version was also released in 2000, which, due to its limited production, has become an extremely rare collector's piece. The package contains a keyboard, controller, VMU, mouse, and a Hello Kitty trivia game. Two limited edition Dreamcast models based on Capcom's Resident Evil Code: Veronica game were also released, one a clear pink "Claire Redfield" model and VMU, and the other a clear dark blue model and VMU; both included a copy of the game. The R7 model ("Regulation#7", referring to the regulation seven in the Japanese penal code pertaining to businesses affecting public morals) consisted of a special refurbished Dreamcast unit that was originally used as a network console in Japanese pachinko parlors, in a newly designed black case. The final Dreamcast models were released in gold.

This audio file was created from a revision of Dreamcast dated 2011-04-30, and does not reflect subsequent edits to the article. (Audio help)
More spoken articles