The SG-1000 (エスジー・セン, Esujī Sen?), which stands for Sega Game 1000, was a cartridge-based video game console manufactured by Sega. This system marked Sega's first entry into the home video game hardware business, and while the system was not popular,[1] it provided the basis for the more successful Sega Master System.[2]

The SG-1000 was first released to the Japanese market on July 15, 1983. Coincidentally, this is exactly the day that Nintendo's Family Computer was released in Japan. The console reached minor success in that market and sold moderately well within Asia until 1985. The system was launched in New Zealand as released by Grandstand Leisure Limited, Australia by John Sands and in other countries, such as France, Italy, Spain, and South Africa. The console in its original form was never launched in North America.

Game manufacturer Tsukuda Original produced the Othello Multivision (オセロマルチビジョン?), an SG-1000 clone with its own set of Othello Multivision-branded games. Because the SG-1000's hardware was very similar to Coleco's Colecovision console, Telegames was able to produce a clone named the Telegames Personal Arcade in North America, which can play both SG-1000 and Colecovision games. The Telegames Personal Arcade was based on Bit Corp's Dina 2-in-1 ColecoVision clone.

A caveat is the SG-1000's surprisingly wide availability on Taiwan's secondary market. This console is highly significant in Taiwan as one of its first and best-remembered consoles, where it was manufactured and sold (very briskly) under license as "阿羅士" ['Lou Shi']. This was striking in that in the same time period from 1983 to 1986, Famicom games were widely pirated as standalone and multi-carts (replete with rudimentary switch banks to select the active ROM), as well as no less than three different pirated versions of the Atari 2600 with boastful monikers characteristic of the times ("冒險家" ['Adventurer'], "賓果" ['Delight'], "強棒創造者" ['Steadfast Creator']).

Taiwan, among a few other countries, also received a "Mark IV" version of the console (most likely a modified Master System II) and the Mark naming convention was further extended to the Mega Drive/Genesis ('Mark V').

In July 1984, Sega released an updated version of the console called the SG-1000 II. It is functionally identical to the SG-1000, but has a re-styled shell and the connector for the optional plug-in SK-1100 keyboard has been moved from the rear to the front. It was initially priced at ¥15,000. A computer version of this console, with a built-in keyboard, was called the SC-3000, which would go on to outsell the SG-1000.

The SG-1000 runs all SC-3000 games and applications, with the exception of Music and Basic Cartridges. The machine could be used just like the SC-3000, provided one had the keyboard attachment ready. In Japan the console also had an optional game card reader add-on called the Card Catcher that allowed for the use of Sega game card software. Card based software was exclusive to Japan, only cartridge based games were released in Europe and Oceania.

The Card Catcher would become built into the Sega Mark III, as well as the first version of the Master System. 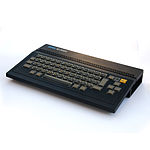 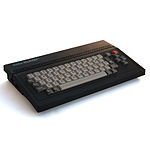 Users were able to create their own programs and games on the machine in BASIC, as well as machine code. A speech synthesis unit, light pen, and several other third party accessories were also available.

The SC-3000H, which originally sold for ¥33,800, was an upgraded version of the SC-3000 with more RAM and an upgraded keyboard (the original keyboard was of the low-end membrane type).

The Sega Mark III (model number SG-1000M3), a yet newer version in Japan with improved video hardware and an increased amount of RAM, would be redesigned to become the Sega Master System.

The Gametap subscription gaming service includes an emulator of the SG-1000 console. As of June 15, 2007[update], eleven SG-1000 titles were available for play. The open source emulators MESS, blueMSX, and MEKA are able to emulate the SG-1000 console, among other consoles. Sega Master System emulators are usually able to play SG-1000 games, as the real Sega Master System also had that capability.

(It is inserted into Cartridge Slot, and a 'Card Catcher' is the thing of the adapter to use card software. A 'Card Catcher' attached version existed in the first limited edition of Dragon-Wang and ZOOM-909. Because there is no card slot in the SG-1000/SC-3000 series, it is a necessary adapter (card slot SEGA Mark III/ Master System). But, it is possible that it is used.)