Mark Joseph Coure MP, an Australian politician, is a member of the New South Wales Legislative Assembly representing Oatley for the Liberal Party of Australia since 2011.[1]

Coure was educated at St Joseph’s at Oatley, then Marist College Penhurst and Kogarah. Coure is a business operator and franchisee owner of Mortgage Choice, a mortgage broking service.[2] Elected to Kogarah Council in 2004, Coure has announced his intention to step down from Council at the next local government elections.[3]

Mark was elected to Kogarah Council in 2004 and re-elected in 2008 with an increased majority. 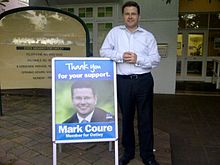 Mark Coure outside his Hurstville Office

In 2011, Mark Coure contested the normally safe Labor seat of Oatley in the St George-Kogarah district.[3] Mark was elected with a swing of 15.9 per cent and winning the seat with 50.5 per cent of the vote on a two party preferred basis.[4] Mark's opponent was the incumbent Labor sitting member, Kevin Greene who had held the seat for 12 years.

Since his election in March 2011, Mark was appointed to the Independent Commission Against Corruption Committee.