The Maritime Junior Hockey League (MHL) is a Junior A ice hockey league under Hockey Canada, a part of the Canadian Junior Hockey League. It consists of four teams from New Brunswick and one team from Prince Edward Island, which make up the Roger Meek Division, and six teams from Nova Scotia which make up the Maurice Bent Division. The winner of the MJAHL playoffs competes for the Fred Page Cup against the winners of the Quebec Junior AAA Hockey League and the Central Junior A Hockey League. The winner of the Fred Page Cup then moves on to compete for the Canadian National Junior A Championships, the Royal Bank Cup.

Originally known as the Metro Valley Junior Hockey League, the league was founded in 1967 by Fred McGillivray and Louie Lewis of Halifax, Nova Scotia and Don Stewart of Berwick, Nova Scotia as a Junior "B" level hockey league. Originally an exclusively Nova Scotia hockey league, it included six teams: East Hants Junior Penguins, Halifax Colonels, Dartmouth Hoyts, Windsor Royals, Kentville Riteways, and Berwick Shell Juniors. 1968 saw the Truro Bearcats and Amherst Ramblers replace the teams from Kentville and Berwick. In 1971–72 the New Glasgow Bombers and the Pictou Maripacs entered the league. Stellarton and a new Kentville franchise entered the league in 1973 and 1974 respectively.

In 1977, still known as the "Metro Valley", the league entered into the Tier II Junior "A" level. The jump to Junior "A" was, in theory, to be a catalyst for the development of the league. The Cole Harbour Colts (Scotia Colts), who entered the league in 1976, became the first team in league history to host the national championship, then known as the Centennial Cup, in 1980.

The 1983 season saw the expansion of the Moncton Midland Hawks of Moncton, New Brunswick, the league's first non-Nova Scotia team. The Hawks came from the New Brunswick Junior Hockey League and are now known as the Dieppe Commandos. In 1986, the league expanded to Antigonish and the Scotia Colts, again, hosted the Centennial Cup. The Summerside Western Capitals of the Island Junior Hockey League, Prince Edward Island's junior hockey league, hosted the 1989 Centennial Cup.

In 1991, Summerside and Charlottetown of Prince Edward Island left the IJHL and joined the newly dubbed "Maritime Junior A Hockey League". The IJHL is still PEI's premier Junior league, but now is only a Junior "B" league. The winner of the IJHL's playoffs compete for the Don Johnson Cup, the Maritime Junior "B" Championship.

The Truro Bearcats joined the league in 1997–98 but this was overshadowed by the failure of the Cape Breton Islanders which had become the Glace Bay Miners. With the arrival of the Quebec Major Junior Hockey League Cape Breton Screaming Eagles, they folded part way through the season leaving the league with nine teams again.

A tenth team was added for the 2000–2001 season, the Miramichi Timberwolves. At the same time the East Hants Penguins moved to Dartmouth and became the Scotia Dairy Queen Blizzard. At the end of the 2001–02 season the league approved the transfer of the Blizzard to Yarmouth. The Yarmouth Motormart Mariners began play in September 2002. In early 2003 the league governors approved expansion into Woodstock, N.B. with the Slammers beginning play in the 2003–04 season.

The league got their second national Championship when the Halifax Oland Exports won the 2002 Royal Bank Cup on home ice. One year later, after financial trouble with Oland Brewery, the franchise's name was changed to Halifax Team Pepsi. In the spring of 2004, the Weeks Hockey Organization bought the club, moved it to New Glasgow and renamed it the Pictou County Weeks Crushers. On that same day Halifax got a new team as they were granted an expansion franchise, the Halifax Wolverines.

In the spring of 2008, the MJAHL had some big changes.

On 15 April, the Antigonish Bulldogs announced that they were applying for a leave of absence for one year.[3] On 26 April, the Bulldogs had to choose between two groups trying to buy the team and relocate it. The first group would move the franchise to New Richmond, Quebec. The other was a group based in Halifax and they would relocate the team to the Halifax area. At the Board of Governors meeting that day, the proposal to relocate the Antigonish franchise to New Richmond, Quebec was not considered to be in the best interests of the league and its members. The Goverors did leave the door open to the sale to a Halifax group and a move to Metro Halifax. The sale and relocation of the franchise to Halifax was later approved.

At the same Governors meeting, in response to the decision to leave the door open on the sale of the Bulldogs, the owners of the Halifax Wolverines announced their plans to move to Bridgewater. The Governors voted on the decision and it was approved.[4]. Following a name the team contest, the franchise was dubbed the Bridgewater Lumberjacks.

Later that week on 29 April, the Moncton Beavers announced that they had failed to come to terms on a new lease for the Tim Hortons 4-Ice centre and had subsequently moved themselves to the neighboring city of Dieppe. The team was renamed the Dieppe Commandos[5].

Rounding out this very busy month in the history of the MJAHL was the Charlottetown Abbies decision, on 1 May, to apply for a leave of absence for one year, which ended up being accepted.[6]

The Halifax franchise (former Antigonish Bulldogs) announced on 22 August 2008, that the club would be known as the Halifax Lions. This was the name of the successful Halifax team in the 1980s.[7]

The current MJAHL has eleven teams, down from a maximum of twelve at one time. The league has hosted the Royal Bank Cup and Centennial Cup seven times, winning twice. MJAHL teams have also won three Fred Page Cups as the Junior "A" Eastern Canadian Champions to earn the right to compete for the Royal Bank Cup.

The league hired its first professional full time League President in 2003, Vernon Doyle. In 2010, the league dropped the "A" from their name and changed their abbreviation to "MHL". 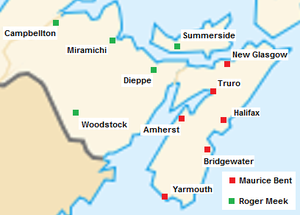 From the 1970s until 1991, the Callaghan Cup was the Atlantic Junior A Championship of Canada. The winners of New Brunswick, Prince Edward Island, Nova Scotia, and Newfoundland and Labrador would playdown for this trophy during the Hewitt-Dudley Memorial Trophy and Manitoba Centennial Cup playdowns.

In 1991, the Callaghan Cup became exclusive to the MJAHL. The Callaghan Cup was their championship trophy until after the 2006 playoffs, when it was replaced by the Kent Cup,

Timeline of teams in the MHL