Dieppe is located on the Petitcodiac River east of the adjacent city of Moncton. It forms the southeastern part of the Greater Moncton Area, which also includes the city of Moncton, the town of Riverview, Moncton Parish (8,747), Memramcook (4,638), Coverdale (4,144), and Salisbury (2,036). Statistics Canada estimates that the 2010 metropolitan population is 137,300.

Dieppe received its present name upon incorporation as a town in 1952 in honour of the Canadian soldiers killed in the 1942 Dieppe Raid in Dieppe, France. Originally known in 1920 as Léger's Corner, the villages of Saint-Anselme and Chartersville (settled in 1776) and the local service districts of Fox Creek-Dover then known as Ruisseau-des-Renards (settled in 1746) were next amalgamated to the Town of Dieppe in 1973. Dieppe's municipal status was changed in 2003 from a town to a city, in part to avoid amalgamation with Moncton.[2] Dieppe is the biggest city with a francophone majority outside the province of Quebec. Over 74 % of its inhabitants mother tongue is of French. For that reason the city has a vibrant Acadian culture, history and lifestyle. In addition almost 72 % of its residents are bilingual (French and English).

Although considered a suburban bedroom community, Dieppe is now one of the fastest growing municipalities in the Atlantic provinces and the 5th fastest growing in Canada with an increase in population of 24.2% between 2001 and 2006 according to Statistics Canada.[1] It has an economy centred on the transportation, service and logistics industries.

Dieppe is the location of the following institutions and attractions:

The City of Dieppe and the Economic Development Corporation of the City of Dieppe have assembled of over 13 acres (53,000 m2) of land in the centre of the city for the purpose of creating a new vibrant city centre that reflects the spirit of the urban Acadian community. The lands are located to the south east of Champlain Street and Acadie Avenue, the main intersection in Dieppe, and include the current city hall.

CFBO-FM, located in Dieppe, is a French language radio station broadcasting at the 90.7 FM frequency. The station airs an adult contemporary/community radio format branded as BO-FM. It is owned by Radio Beauséjour Inc.[] 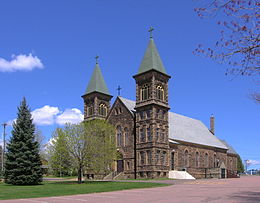 St. Anselme Church in Dieppe, New Brunswick. The current building was erected in 1900.