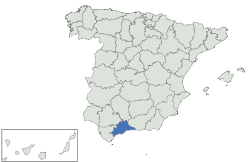 The Province of Málaga (pronounced: [ˈmalaɣa]; Spanish Provincia de Málaga) is located on the southern coast of Spain, in the Autonomous Community of Andalusia. It is bordered by the Mediterranean Sea to the South, and by the provinces of Cádiz, Sevilla, Córdoba and Granada.

Its main industry and claim to fame is its tourist resorts, particularly those on the beaches along the Costa del Sol ("Sun Coast"). These beaches are visited by millions of European tourists. But besides the beaches, the mountainous province has some very interesting places to visit, like the gorge of El Chorro or the Torcal in Antequera.

The magnum opus of Cuban composer Ernesto Lecuona, "Malagueña", is named for the music of the Gypsies of this region of Spain. Another famous patron of the city is Pablo Picasso.

Málaga contains 101 municipalities. Besides the capital, its main cities are Marbella, Vélez-Málaga, Antequera and Ronda.

The population is concentrated mainly in the metropolitan area of Málaga and throughout the coastal area. The population density surpasses both the Andalusia and Spanish averages, reaching 204.06 hab/km². The municipalities of Antequera and Ronda , both with more than 35,000 inhabitants, are located in the interior.