The Region of Murcia (Spanish: Región de Murcia, IPA: [reˈxjon de ˈmurθja]; Valencian: Regió de Múrcia, IPA: [redʒiˈo ðe ˈmuɾsia])[1] is an autonomous community of Spain located in the southeast of the country, between Andalusia and Valencian Community, on the Mediterranean coast.

The Region of Murcia is bordered by Andalusia (the provinces of Almería and Granada); Castile-La Mancha (the province of Albacete, which was historically connected to Murcia until 1980); the Valencian Community (province of Alicante); and the Mediterranean Sea. The community measures 11,313 km² and has a population of 1.4 million, of whom one-third live in the capital. The highest mountain is Los Obispos (2,015 m).

The region is a major producer of fruits, vegetables, and flowers for Spain and the rest of Europe. Wineries have developed near the towns of Bullas, Yecla, and Jumilla, as well as olive oil near Moratalla. Murcia is mainly a warm region which has made it very suitable for agriculture. However the precipitation level is low and water supply is a hot subject today since, in addition to the traditional water demand for crops, there is now also a demand of water for the booming tourist developments which take advantage of the mild weather and beaches. Water is supplied by the Segura River and, ever since the 70's, by the Tajo transvasement, a major civil engineering which, under some environmental and sustainability restraints, brings water from the Tajo into the Segura.

The region is located in the eastern part of the Cordilleras Béticas mountains and it is influenced by their orography. These mountain ranges are divided as well in the Prebética, Subbética and Penibética mountain ranges (from north to the south). 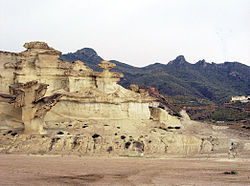 Traditionally it has been considered that the peak of Revolcadores, pertaining to the bulk of the same name, was the highest point in the Region of Murcia, with a height of 2,027 meters; but in measurements of the most recent maps of the SNIG (National Service of Geographic Information of Spain), Revolcadores appears with a height of 1,999 m, and there is a mountain, Los Obispos ("The Bishops"), located slightly further north, which is more elevated (2,015 m).

Approximately 27% of the Murcian territory can be described as mountainous, 38% as intramountainous depressions and running valleys, and the remaining 35% as flat lands and plateaux.

The Region of Murcia enjoys a Mediterranean climate of semi-arid type, with mild winters (an average of 11C in December and January) and warm summers (where the daily maximum regularly exceeds 40°C). The average annual temperature is 18°C.

With little precipitation of about 300 to 350 mm per year, the region has between 120 and 150 days in the year where the sky is totally clear. April and October are the months with the most precipitation, there being frequent heavy downpours in a single day.

The distance to the sea and the relief causes a thermal difference between the coast and the interior, specially in winter, when the temperature rarely descends below 10º on the coast, while in the interior regions the minimum does not usually rise above 6º and the precipitation level is higher (up to 600 mm).

The city of Murcia holds the record temperature of the 20th century in Spain. It reached 46.1° Celsius (115 degrees Fahrenheit) on July 4, 1994. The winter of 2005 was the coldest in a long time, with snow even falling on the Murcian coast. [1] 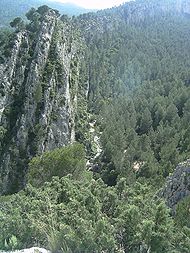 Lands around Moratalla and river Alharabe.

The hydrographic network of the region is made up of the Segura river and its affluents:

Due to the water supplying incapacity of the Segura river basin, contributions to this river basin are made, originated from the basin of the Tajo river, by means of the Tajo-Segura trasvasement. 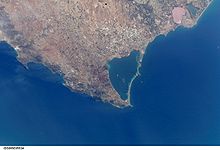 Satellite view of the Mar Menor

The greatest natural lake of Spain can be found in the region: the Mar Menor (Small Sea) lagoon. It is a salt water lagoon, adjacent to the Mediterranean Sea. Its special ecological and natural characteristics make the Mar Menor a unique natural place and the largest saltwater lake in Europe. With a semicircular shape, it is separated from the Mediterranean Sea by a sand strip 22 km in length and between 100 and 1200 m wide, known as La Manga del Mar Menor (the Minor Sea's Sandbar). The lagoon has been designated by the United Nations as a Specially Protected Zone of Importance for the Mediterranean. Its coastal perimeter accounts for 73 km of coast in which beaches follow one another with crystal clear shallow water (the maximum depth does not exceed 7m). The lake has an area of 170 square kilometers. 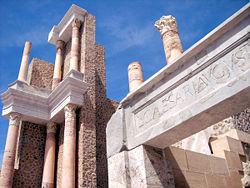 The Carthaginians established a permanent trading port on the coast at Cartagena, which the Romans called Carthago Nova. For the Carthaginian traders, the mountainous territory was merely the Iberian hinterland of their seacoast empire. During The Roman period Murcia did not exist but its actual borders could have been inside of the province of Hispania Carthaginensis. Under the Moors, who introduced the large-scale irrigation on which Murcian agriculture depends, the province was known as Todmir; it included, according to Idrisi, the 11th century Arab cartographer based in Sicily, the cities of Orihuela, Lorca, Mula and Chinchilla, Spain.

The Kingdom of Murcia became independent as a taifa centered on the Moorish city of Murcia after the fall of the Umayyad Caliphate of Córdoba (11th century). Moorish Taifa of Murcia included Albacete and part of Almería as well. After the battle of Sagrajas in 1086 the Almoravid dynasty swallowed up the taifas and reunited Islamic Spain. Ferdinand III of Castile received the submission of the Moorish king of Murcia in 1243.

In the usual way, the Muslims were evicted from the cities, and Ferdinand's heir Alfonso X of Castile, who benefited from rule over a largely depopulated Murcia, divided the border kingdom in three regions for administrative purposes, entrusted respectively to the concejos de realengo, to the ecclesiastical señores seculares, as a reward for their contributions to the Reconquista and to the Military Orders founded in the 11th century. Alfonso annexed the Taifa of Murcia as King of Murcia and Señorio de Cartagena outright in 1266, and it remained technically a vassal kingdom of Spain until the reforms in the liberal constitution of 1812. Murcia became an autonomous region in 1982.

The Castilian conquest of Murcia was significant because it gave the former access to the Mediterranean for the first time and ended the expansion of the Kingdom of Aragon which had been moving south along the coast.

The Region of Murcia has a population of 1,424,063 inhabitants (INE 2008, National Statistic Institute of Spain), of which almost a third (30.7%) live in the municipality of Murcia. It makes up 3.0% of the Spanish population. In addition, after Ceuta and Melilla, Murcia has the highest vegetative growth (5.52 by thousand inhabitants) and also the highest birth rate of the country. 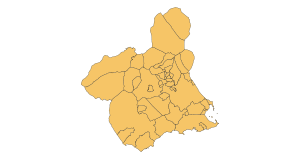 The Region of Murcia comprises 46 municipalities, the most populated being Murcia, Cartagena, Lorca, and Molina de Segura.

The Spanish spoken in the region has its own accent and local words. The Murcian dialect tends to eliminate many syllable-final consonants and to emphasize regional vocabulary, much of which is derived from Aragonese and old Arabic words. The general intonation and some of the distinctive vocabulary of the Spanish dialect spoken in Murcia share several traits with the one spoken in the neighboring province of Almería, in Andalusia, and the Vega Baja del Segura in the Alicante province.

Valencian (Catalan) is spoken in a small area of the region known as El Carche. 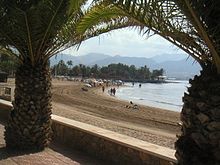 Despite the famous seaside resorts, the overall region keeps being notably unknown even within Spain, so it continues to be relatively unspoilt compared to other more overcrowded areas of the Spanish Mediterranean coast. Nevertheless its more than 300 sunny days a year with an average temperature of 21 degrees, and the 250 km of beaches of the so-called Costa Cálida (Warm Coast) have attracted tourists for decades.

The region is also being promoted as a cultural destination with a lot of highlits for visitors: monuments, gastronomy, cultural events, museums, historic remains, festivals etc. The Region of Murcia is one of the Spanish autonomous communities that has grown the most in the last years, and it has conferred it the character of an ideal destination of services, shopping and for the organization of cultural events and conventions. 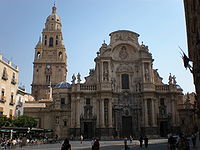 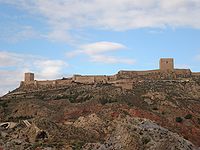 the interior of the region of Murcia has plenty of castles and fortifications showing the importance of these frontier lands between the Christian Castile and the Muslim Andalusia. They include:

Cartagena’s and Lorca’s Holy Week’s processions have been declared of International Tourist Interest, together the Murcia's "Bando de la Huerta" and "Burial of the Sardine", included in its Spring Festivities. Murcia’s Holy Week is also interesting since its processions include Murcian sculptor Francisco Salzillo's statues.

Cartagena’s main festivities are the Carthagineses y Romanos, re-enacting the Punic Wars. They have been declared of National Tourist Interest.

The Águila’s Carnival is one of the most important and colourful of Spain. 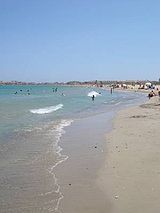 This is the most developed tourist resource in Murcia. The Costa Cálida has 250 km of beaches, from el Mojón at the North near Alicante to Águilas, South West Murcia, near Almería. One of the major destinations of Murcia is the Mar Menor or Small Sea, the largest natural lake of Spain and the largest salty lagoon in Europe, located by the Mediterranean. It is separated from the mediterranean by a 22 km narrow sandy strip known as La Manga del Mar Menor or simply La Manga. It is probably the most developed and overcrowded holiday area of Murcia, despite being declared a Specially Protected Area of Mediterranean Importance (SPAMIs) by the United Nations.

Mar Menor's muds are famous for its therapeutic properties. Apart from Mar Menor, the Murcian coast from the historical city of Cartagena to the frontier with Andalusia, that corresponds to the Mediterranean Sea alternates wild and unspoilt rocky areas with large sandy beaches, with the towns of Mazarrón and Águilas standing out.

The tourism needs have forced the area to add all kinds of facilities and services. The construction boom shows the huge amount of estates, including the controversial holiday resorts of Polaris World and second residences, as well as numerous malls. Thanks to the orography and climate of the region of Murcia, these lands are suitable for golf courses, a fact that has been very controversial because of the need for water, which Murcia lacks being a very dry region.

The region of Murcia has 19 areas under different statutes of protection, representing 6% of its territory. 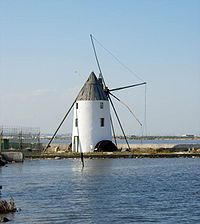 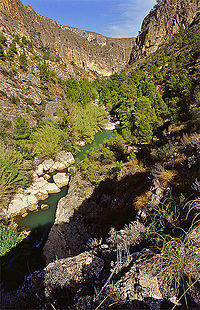 Inner lands of the region, near the historical towns of Caravaca de la Cruz and Moratalla, offer a number of rural accommodations and facilities: cottages, farmhouses, country houses and camp sites. Visitors can engage in activities related to excursions, day trips, sports, sightseeing.