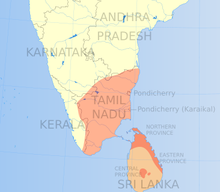 Distribution of Tamil speakers in South India and Sri Lanka (1961).

Tamil nationalism in India is an aspiration by some Tamils to establish, at minimum, self determination or at maximum secession from India to establish an Independent Tamil State of which would consist of today's Tamil nadu, Puducherry and Tamil Eelam of Sri Lanka.[citation needed] The ideology of Tamil Nationalism seeks to preserve and modernize Tamil language and culture, unite Tamils across boundaries, eradicate caste discrimination within Tamils, emancipate and empower Tamil women, uplift the economic status of Tamils, and to securely establish Tamil identity in a globalized world. 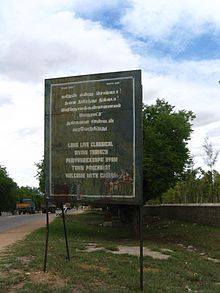 An official sign in Tamil Nadu. The Tamil text praises the language and urges Tamils to have pride in their linguistic and cultural heritage.

The Indian Tamil Nationalism is the smaller section of the Dravidian nationalism which consisted of all the four major language in the South India. The Dravidian Nationalism was popularized by a series of small movements and organizations that contended that the South Indians, without the Brahmins, formed a racial and a cultural entity that was different from the north Indians. This particular moment claimed that the Brahmins were originally from the north and they imposed their language, Sanskrit, religion and heritage on the southern people. A new morphed ideology of the Dravidian nationalism gained momentum within the Tamil speakers during the 1930 and 1950. The Tamil Nationalism was thus based on three ideologies: dismantling of Brahmin hegemony; revitalization of pure Tamil Language and social reform by abolition of existing cast systems, religious practices and recasting women’s equal position in the society. By the late 1960, the political parties who were espousing Dravidian ideologies gained power within the state of Tamil Nadu.[1] Subsequently the Nationalist ideologies lead to the argument by Tamil leaders that, at minimal, that Tamils must have self determination or, at maximum, secession from India[2] Since the 1969 election victory of Dravida Munnetra Kazhagam (DMK) under C. N. Annadurai, Tamil nationalism has been a permanent feature of the government of Tamil Nadu. After the Tamil people achieved self determination the claim for session became weaker with most mainstream political parties, except a fringe few, are committed to development of Tamil Nadu within a united India. Most major Tamil Nadu regional parties such as DMK, All India Anna Dravida Munnetra Kazhagam (AIADMK), Pattali Makkal Katchi (PMK) and Marumalarchi Dravida Munnetra Kazhagam (MDMK) frequently participate as coalition partners of other pan-Indian parties in the Union Government of India at New Delhi. The modern day Tamil Nationalism have actually contributed to a more flaccid celebration of Tamil identity and the ‘uplift’ of the poor [3]