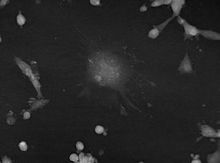 Digital holography comes in different flavors, such as off-axis Fresnel, Fourier, image plane, in-line, Gabor and phase-shifting digital holography,[2] depending on the optical setup. The basic principle, however, is the same; a hologram is recorded and an image is reconstructed by a computer.

3-Dimensional information
An object image is calculated at a given focal distance. However, as the recorded hologram contains all the necessary object wave front information, it is possible to calculate the object at any focal plane by changing the focal distance parameter in the reconstruction algorithm. In fact, the hologram contains all the information needed to calculate a complete image stack. In a DHM system, where the object wave front is recorded from multiple angles, it is possible to fully characterize the optical characteristics of the object and create tomography images of the object.[5][6]

Digital autofocus
Conventional autofocus is achieved by vertically changing the focal distance until a focused image plane is found. As the complete stack of image planes may be calculated from a single hologram, it is possible to use any passive autofocus method to digitally select the focal plane.[7] The digital auto focusing capabilities of digital holography opens up the possibility to scan and image surfaces extremely rapidly, without any vertical mechanical movement. By recording a single hologram and afterwards stitch sub-images together that are calculated at different focal planes, a complete and focused image of the object may be created.[8]

Low cost
In optical microscopy systems, optical aberrations are traditionally corrected by combining lenses into a complex and costly image forming microscope objective. Furthermore, the narrow focal depth at high magnifications requires precision mechanics. The needed components for a DHM system are inexpensive optics and semiconductor components, such as a laser diode and an image sensor. The low component cost in combination with the auto focusing capabilities of DHM, make it possible to manufacture DHM systems for a very low cost.[11]

The first reports of replacing the photographic hologram of classical holography by digitally recording the hologram and numerically reconstructing the image in a computer was published in the late 1960s[31] and in the early 1970s.[32][33] Similar ideas were proposed for the electron microscope in the early 1980s.[34] But, computers were too slow and recording capabilities were too poor for digital holography to be useful in practice. After the initial excitement, digital holography went into a similar hibernation as holography experienced about two decades earlier.

By the mid 1990s, digital image sensors and computers had improved tremendously, but still lacked the required pixel count and density for digital holography to be anything more than a curiosity. At the time, the market driving digital image sensors was primarily low-resolution video, and so those sensors provided only PAL, NTSC, or SECAM resolution. This suddenly changed at the beginning of the 21st century with the introduction of digital still image cameras, which drove demand for inexpensive high-pixel-count sensors. As of 2010, affordable image sensors can have up to 60 megapixels. In addition, the CD and DVD-player market has driven development of affordable diode lasers and optics.