High-content screening is a drug discovery method that uses images of living cells as the basic unit for molecule discovery. Proteins of interest present in the cells are detected using fluorescent tags, such as the green fluorescent protein, or by fluorescent antibodies. Image analysis is then used to measure changes in properties of the cells caused by external treatment such as chemical inhibitors or RNA interference- for example if the cells division is slowed or entry of a protein into the cell is arrested. High content screening is the combination of modern cell biology, with all its molecular tools, with automated high resolution microscopy and robotic handling. It differs from most life science work because experiment evaluation is mostly automated. The technology is mainly used to determine whether a potential drug affects aspects of cell function involved in or that describe a disease. For example, in humans G-protein coupled receptors (GPCRs) are a large family of around 880 cell surface proteins that transduce extra-cellular changes in the environment into a cell response, like triggering an increase in blood pressure because of the release of a regulatory hormone into the blood stream. Activation of these GPCRs can involve their entry into cells and when this can be visualised it can be the basis of a systematic analysis of receptor function through chemical genetics, systematic genome wide screening or physiological manipulation.

High Content screening is also known as cell based screening, phenotypic screening or visual screening, and it has a major place in pharmaceutical company drug discovery. All these terms refer to the systematic search for new drugs, small molecule inhibitors or chemical entities that could have use in biology or medicine. The parallel acquisition of data on different cell properties, for example activity of signal transduction cascades and cytoskeleton integrity is the main advantage of this method in comparison to the faster but less detailed high throughput screening. While HCS is slower, the wealth of acquired data allows a more profound understanding of drug effects.

Automated image based screening permits the identification of small compounds altering cellular phenotypes and is of interest for the discovery of new pharmaceuticals and new cell biological tools for modifying cell function. The selection of molecules based on a cellular phenotype does not require a priori knowledge of the biochemical targets that are affected by compounds and while this may be a benefit for compound discovery, the biochemical target itself must be subsequently identified. Given the increase in the use of phenotypic/visual screening as a cell biological tool, methods are required that permit systematic biochemical target identification if these molecules are to be of broad use (Burdine and Kodadek, 2004). Target identification has been defined as the rate limiting step in chemical genetics/high-content screening (Eggert and Mitchison, 2006).

The goal of HCS is better research and new pharmaceutical discovery

The history of high-content screening

High-content screening technology allows for the evaluation of multiple biochemical and morphological parameters in cellular systems. Through combining the imaging of cells in microtiter plates with automated image analysis algorithms, researchers can acquire deeper knowledge on multiple biochemical or morphological pathways at the single-cell level at an early stage in the development new drugs.

The utility of automated cell biology requires an examination of how automation and objective measurement can improve the experimentation and the understanding of disease. First, it removes the influence of the investigator in most, but not all, aspects of cell biology research and second it makes entirely new approaches to possible.

In review, classical 20th century cell biology used cell lines grown in culture where the experiments were measured using very similar to that described here, but there the investigator made the choice on what was measured and how. In the early 1990s, the development of CCD cameras (charge coupled device cameras) for research created the opportunity to measure features in pictures of cells- such as how much protein is in the nucleus, how much is outside. Sophisticated measurements soon followed using new fluorescent molecules, which are used to measure cell properties like second messenger concentrations or the pH of internal cell compartments. The wide use of the green fluorescent protein, a natural fluorescent protein molecule from jellyfish, then accelerated the trend toward cell imaging as a mainstream technology in cell biology. Despite these advances, the choice of which cell to image and which data to present and how to analyse it was still selected by the investigator.

By analogy, if one imagines a football field and dinner plates laid across it, instead of looking at all of them, the investigator would choose a handful near the score line and had to leave the rest. In this analogy the field is a tissue culture dish, the plates the cells growing on it. While this was a reasonable and pragmatic approach automation of the whole process and the analysis makes possible the analysis of the whole population of living cells, so the whole football field can be measured.

From one to many—what this offers for research

This technology allows a (very) large number of experiments to be performed, allowing explorative screening. Currently its main use is in chemical genetics where large, diverse small molecule collections are systematically tested for their effect on cellular model systems. Novel drugs can be found using screens of tens of thousands of molecules, and these have promise for the future of drug development. Beyond drug discovery, chemical genetics is aimed at functionalizing the genome by identifying small molecules that acts on most of the 21,000 gene products in a cell. High-content technology will be part of this effort which could provide useful tools for learning where and when proteins act by knocking them out chemically. This would be most useful for gene where knock out mice (missing one or several genes) can not be made because the protein is required for development, growth or otherwise lethal when it is not there. Chemical knock out could address how and where these genes work. Further the technology is used in combination with RNAi to identify sets of genes involved in specific mechanisms, for example cell division. Here, libraries of RNAis, covering a whole set of predicted genes inside the target organisms genome can be used to identify relevant subsets, facilitating the annotation of genes for which no clear role has been established beforehand. The large datasets produced by automated cell biology contain spatially resolved, quantitative data which can be used for building for systems level models and simulations of how cells and organisms function. Systems biology models of cell function would permit prediction of why, where and how the cell responds to external changes, growth and disease. 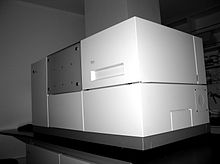 High-content screening technology is mainly based on automated digital microscopy and flow cytometry, in combination with IT-systems for the analysis and storage of the data. “High-content” or visual biology technology has two purposes, first to acquire spatially or temporally resolved information on an event and second to automatically quantify it. Spatially resolved instruments are typically automated microscopes, and temporal resolution still requires some form of fluorescence measurement in most cases.This means that a lot of HCS instruments are (fluorescence) microscopes that are connected to some form of image analysis package. These take care of all the steps in taking fluorescent images of cells and provide rapid, automated and unbiased assessment of experiments.

The instruments on the market can be divided on the basis of price, footprint and the ethereal design qualities of the box they come in - but the most incisive difference is whether the instruments are optical confocal or not. Confocal imaging summarizes as imaging/resolving a thin slice through an object and rejecting out of focus light that comes from outside this slide. This gives higher image signal to noise and higher resolution than the more commonly applied epi-fluorescence microscopy. For many biological assays, confocal imaging is not ideal (e.g. phototoxicity issues or the need for a larger focal depth etc.). What all instruments share is the ability to take, store and interpret images automatically and most integrate into large robotic cell/medium handling platforms.

Alternatively more generic microscope instrumentation such as the Cell Observer by Carl Zeiss can be used for high content screening. While such instruments are less specialized they can be more appealing to academic settings, where tasks and experiments change more rapidly than in industrial research.

Dedicated software for image analysis is available from these vendors (IN Cell Investigator, Perkin Elmer Columbus) or from specialised firms such as DCILabs (Belgium), LemnaTec (Germany) and from Accerlys Pipeline Pilot, as well as from some groups which provide open-source software for image analysis, such as BioImageXD, CellProfiler, and ImageJ. Dedicated open-source software for data management and data mining: Open source web based database system to publish image based screening experiments HCPB.

Timeline of the evolution of the science and technology