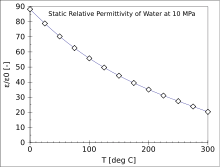 Temperature dependence of the relative static permittivity of water

The relative permittivity of a material under given conditions reflects the extent to which it concentrates electrostatic lines of flux. Technically, it is the ratio of the amount of electrical energy stored in a material by an applied voltage, relative to that stored in a vacuum. Similarly, it is also the ratio of the capacitance of a capacitor using that material as a dielectric, compared to a similar capacitor which has a vacuum as its dielectric.

where ε(ω) is the complex frequency-dependent absolute permittivity of the material, and ε0 is the vacuum permittivity.

Relative permittivity is a dimensionless number that is in general complex. The imaginary portion of the permittivity corresponds to a phase shift of the polarization P relative to E and leads to the attenuation of electromagnetic waves passing through the medium. By definition, the linear relative permittivity of vacuum is equal to 1,[9] that is ε = ε0, although there are theoretical nonlinear quantum effects in vacuum that have been predicted at high field strengths (but not yet observed).[10]

The relative permittivity of a medium is related to its electric susceptibility, χe, as εr(ω) = 1 + χe.

The relative static permittivity, εr, can be measured for static electric fields as follows: first the capacitance of a test capacitor, C0, is measured with vacuum between its plates. Then, using the same capacitor and distance between its plates the capacitance Cx with a dielectric between the plates is measured. The relative dielectric constant can be then calculated as

For time-variant electromagnetic fields, this quantity becomes frequency-dependent and in general is called relative permittivity.

The dielectric constant is an essential piece of information when designing capacitors, and in other circumstances where a material might be expected to introduce capacitance into a circuit. If a material with a high dielectric constant is placed in an electric field, the magnitude of that field will be measurably reduced within the volume of the dielectric. This fact is commonly used to increase the capacitance of a particular capacitor design. The layers beneath etched conductors in printed circuit boards (PCBs) also act as dielectrics.

Dielectrics are used in RF transmission lines. In a coaxial cable, polyethylene can be used between the center conductor and outside shield. It can also be placed inside waveguides to form filters. Optical fibers are examples of dielectric waveguides. They consist of dielectric materials that are purposely doped with impurities so as to control the precise value of εr within the cross-section. This controls the refractive index of the material and therefore also the optical modes of transmission. However, in these cases it is technically the relative permittivity that matters, as they are not operated in the electrostatic limit.

Similar as for absolute permittivity, relative permittivity can be decomposed into real and imaginary parts:[12]

in terms of a "dielectric conductivity" σ (units S/m, siemens per meter) which "sums over all the dissipative effects of the material; it may represent an actual [electrical] conductivity caused by migrating charge carriers and it may also refer to an energy loss associated with the dispersion of ε' [the real-valued permittivity]" (,[12] p. 8). Expanding the angular frequency ω = 2πc/λ and the electric constant ε0 = 1/(µ0c2), it reduces to:

where λ is the wavelength, c is the speed of light in vacuum and κ = µ0c/2π ≈ 60.0 S−1 is a newly-introduced constant (units reciprocal of siemens, such that σλκ = εr" remains unitless).

Although permittivity is typically associated with dielectric materials, we may still speak of an effective permittivity of a metal, with real relative permittivity equal to one (,[13] eq.(4.6), p. 121). In the low-frequency region (which extends from radiofrequencies to the far infrared region), the plasma frequency of the electron gas is much greater than the electromagnetic propagation frequency, so the complex permittivity ε of a metal is practically a purely imaginary number, expressed in terms of the imaginary unit and a real-valued electrical conductivity (,[13] eq.(4.8)-(4.9), p. 122).