A Giant Inverted Boomerang is a type of steel shuttle roller coaster manufactured by Vekoma. The ride is a larger, inverted version of Vekoma's popular Boomerang sit down roller coasters. There are currently only 5 installations of the model worldwide. 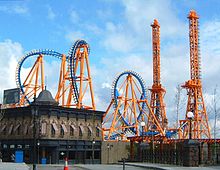 In January 2008, Silverwood Theme Park in Idaho announced on its website that it would install the Déjà Vu from Six Flags Great America with a projected opening date of July that year.[8] On March 26, 2008,[citation needed] Silverwood announced Déjà Vu would operate as Aftershock.[9] Before opening at its new location, the ride was overhauled by Vekoma in order to make the ride more reliable.[citation needed] The ride officially opened July 21, 2008.[9]

In November 2009 it was announced that Mirabilandia in Brazil had purchased Six Flags Over Georgia's Déjà Vu. The ride was renamed Sky Mountain and opened on May 6, 2011.[10]

On August 16, 2011, Masslive reported that Six Flags New England was planning on building a Giant Inverted Boomerang for the park's 2012 season where the Shipwreck Falls attraction is currently located.[11] On August 18, 2011, at the Agawam Public Library the coaster was approved by the Agawam Planning Board.[11] On August 19, 2011, the Los Angeles Times confirmed that Déjà Vu from Six Flags Magic Mountain would be relocated to Six Flags New England and would begin operation under a new name in 2012.[12] An official announcement from Six Flags representatives is expected on September 1, 2011.[12][13]

Later on September 13, 2011, the Six Flags Magic Mountain announce that Déjà Vu will be removed after October 16, 2011, "Déjà Vu fans, we have created some exclusive after hours ride time for you to ride it again before October 16."[17]

The basic track layout of a Giant Inverted Boomerang. 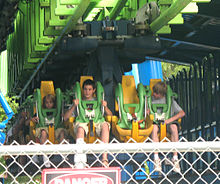 The chevron seating shown on the Great America ride.

As a Giant Inverted Boomerang is a shuttle roller coaster, each installation only operates with a single train. Each of these trains has 8 cars, each utilising 4-across seating, similar to that on Bolliger & Mabillard's inverted roller coasters. However, the seats on Giant Inverted Boomerangs are "staggered" such that the outside seats are pushed back slightly behind the middle two seats in each row. Train caters for a total of 32 riders.

The ride begins when the train slowly backs out of the station and up the vertical lift hill, pulled by a catch car. Once reaching the top of the lift, with riders facing straight down, and their legs dangling in the air, the train is released and zooms through the station heading into a 110-foot (34 m) tall cobra roll. This element contains two of the three inversions found on the ride going forward. After twisting through the cobra roll, riders then go through a 102-foot (31 m) tall vertical loop which crosses the station and hit the second vertical spike of the ride. A catch car there pulls the train up the second vertical tower, this time with riders facing the sky at the top of the tower. After the train reaches the top of the tower, it is released to cycle backward through the layout. The train then goes through the station and heads up the first vertical lift hill again, where it is caught once more and then very slowly lowered back into the station. 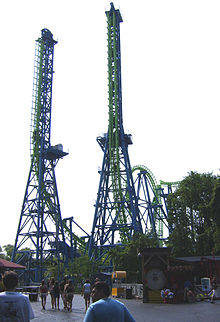 The former Déjà Vu at Six Flags Over Georgia was relocated to Mirabilandia where it operates today.

Six Flags had originally ordered four Giant Inverted Boomerangs in 2001 (the three Déjà Vu coasters in U.S.A. and Stunt Fall at Warner Bros. Movie World in Madrid, Spain). However, following the installation of the 3 Déjà Vu coasters and the discovery of several problems, Six Flags allowed Vekoma resolve these problems before installation of their fourth coaster, Stunt Fall. Vekoma has since upgraded the original three rides to use this system.

One problem was clearance between the riders and the track overhead. After the trains were mounted to the track, it was quickly discovered that riders could reach and touch the track while the train was in motion, posing the risk of injury. Vekoma had to improvise, adding new bars to the original shoulder restraint to prevent guests from reaching up too high.[citation needed]

During initial testing on Six Flags Over Georgia's Déjà Vu, the catch car (a small device that catches and holds the train) on the first tower derailed, breaking parts and destroying the components of the train beyond economical repair.[citation needed] The ride received a replacement train shortly after. 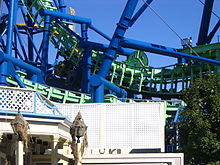 During tests it was discovered that trains would stall in the middle of the cobra roll. Unplanned, the parks installed emergency unloading scaffolding in this location, similar to other Boomerang roller coasters.

Another problem of the ride is the locking mechanism for the shoulder restraints. The Giant Inverted Boomerangs require the use of a battery pack to unlock each restraint in the event of a power loss.[citation needed] Virtually all other roller coasters have a quick manual release system to unload in unusual locations or emergency situations.

Some riders[who?] complained that the restraints give too much room for the riders to "fall forward" during the lift. People who were barrel-chested, overweight or obese complained of chest compressions during the moments that they were on the main lift. Another problem with the restraints was that sometimes the belt attached to the bottom of the restraint would detach from the restraint posing a greater risk that if the restraint lock would somehow malfunction there would be nothing else to keep the rider from falling out of their seat.[citation needed]

Since the announcement of Goliath on September 1, 2011, Ed Markey U.S. Representative and S.I. Sheikh, and A.B. Singhal from the Massachusetts General Hospital told the Boston Herald stating “Fixed-site amusement park rides like those at Six Flags New England are exempt from federal oversight due to a 30-year-old special-interest loophole. This means that even as these rides get faster and taller, safety rules remain stuck in a state-by-state patchwork that leaves riders vulnerable.” And The jerky motions of these rides have been linked to small tears in arteries or a spike in blood pressure, but we aren’t sure if there is necessarily a cause-and-effect relationship.”[21]