The Demon is a multi-looping roller coaster at Six Flags Great America in Gurnee, IL, with an identical twin at California's Great America in Santa Clara, CA. Both coasters opened in 1976 as Turn of the Century and were heavily rethemed and renamed as Demon in 1980.

Turn of the Century

Turn of the Century opened with Marriott's Great America in 1976 and was designed by Arrow Development of Clearfield, Utah. It was painted white and was one of the first roller coasters to feature a double corkscrew.[1] It also featured two airtime hills after the first drop. The hills were infamous for ejecting loose articles from the trains such as hats, sunglasses and stuffed animals.[1] The ride was custom-built for both parks.

After the 1979 season, Turn of the Century was heavily modified. The airtime hills after the first drop were removed and replaced with two back to back vertical loops and a lighted tunnel. Fake rock formations were built around the second loop and around the first half of the lift hill, with a third formation just before the corkscrews. The entire ride was painted black and was renamed Demon. In addition to the re-design, the theme was changed as well. Fog machines were placed in the tunnels, blood red colored water fell out of the rock formation by the corkscrews and a unique logo was unveiled. The original trains were also modified. A three-dimensional logo was attached to the front car of each train and flames were painted on the sides of the cars.

The storyline of the ride's transformation heard in the Demon soundtrack is that the park accidentally missed three payments on the roller coaster, and that a demon has repossessed the ride.

For a period in the 80s, the Demon at Six Flags Great America was branded with the Looney Tunes Tasmanian Devil character.

When Demon first opened in 1980 the speakers placed throughout the ride's line played Demon's own soundtrack. The soundtrack included the infamous "Demon Song", which was specially written for the Great America parks and was also very memorable. Along with the song there were fake radio broadcasts, some about people who reported to have seen the demon, one report about a US Army captain named "Bucky McMacho" bombing the ride, and a few with people trying to lure the demon out of the ride in very strange ways.

Sometime in the 1980s or 1990s the song disappeared and was thought to have been lost forever. Bits and pieces of the sound effects in the soundtrack, however, were still used in the first tunnel before the lift hill. In mid-2005 the original song resurfaced when it was posted on a Marriott's Great America fan site's discussion boards.[2] The song also resurfaced at Six Flags Great America for the park's annual Fright Fest Halloween event. Waukegan News Sun reporter Dan Moran mentioned remembering the song back in the 1980s in an article about Fright Fest 2005. He also recalled how annoying the song would get when waiting more than an hour to ride. The soundtrack has become popular in the roller coaster enthusiast community. Between 2007 and 2009, the soundtrack was on and off in the queue but could be heard in the first tunnel. In 2011, the soundtrack again went silent in the queue, but remained in the first tunnel. 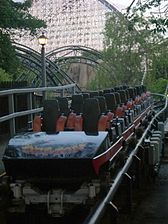 Demon's black train was involved in the accident.

A major incident on the Six Flags Great America version of Demon occurred on Saturday, April 18, 1998. Twenty-three riders were left stranded upside-down after the black train came to an unexpected halt in the middle of one of the vertical loops. Firefighters used a cherry picker to bring the passengers to safety. Some riders were stuck for nearly three hours. Four passengers were taken to local hospitals out of precaution but released that afternoon.

Investigators concluded that the incident was caused by mechanical failure. A guide wheel that runs along the inside of the track separated from the axle of the last car. A mechanical safety system built into the wheel assembly engaged, preventing the train from derailing.

The roller coaster reopened shortly after the conclusion of the investigation.

Most of the theming for the Demon in Illinois was removed over time due to numerous complaints about the ride being too "devilish". Theming elements that would be removed by 1990 included the drain pipe on the sign, 3D logos and flames on the trains, smoke and lighting effects, and the ride's soundtrack. Another major change made to the ride's theming was the lighted tunnel after the loops. The original lighting effect was a swirl around the train as it flew by, but vandals would sneak rocks on board and throw them at the lights above, shattering them and putting other guests in danger. This problem was solved by removing the top lights in the tunnel and the sequence was changed to the current form of a chaser light effect.

For Six Flags Great America's Fright Fest event in 2005 almost all of Demon's original theming returned. Decals similar to the original logos were added to the noses of the trains, fog returned in the tunnels, the Demon Song played in the queue again, red lights shined around the ride, and tiki torches were placed all around the ride.

On the parks's 2006 opening day, the Demon song continued playing in the queue, the decals were still on the front of the trains, and the flames were still painted on the station. The rest of the theming is for Fright Fest Only.

For 2007, the Demon logos on the front of the trains were updated. The decals of the original Marriott-era logo were replaced with new airbrushed logos similar to the originals. The updated logos feature meaner-looking demon eyes, flames, and on the yellow train, fangs. In June 2007, the red train was placed back on the track after an extensive rehab beginning late in the 2005 season.

Also in June 2007, the Demon sign received new airbrush-painted flames on the DEMON letters, and the flowers in front of the sign were re-arranged to look like flames. In July 2007, all of the signs in the queue were repainted to look more themed to the ride. New fencing was also built around the Demon sign hill to prevent young guests from climbing on the sign. In 2008, all theming returned from the previous year's Fright Fest and fog was put in every tunnel and in the queue. However, grey paint replaced the flames on the outside of the operator's booth. After Memorial Day 2010, Demon's black train was put back on track. It was given airbrushed flames on the sides of the front car with no red stripe. For a 2010 advertising deal with Six Flags, the red train was wrapped in Stride Gum advertisements for the entire season. The "Stride Train" remained for most of the 2011 operating season, but the advertisements were removed in late August. In 2011, the yellow train's logo was redesigned to more closely resemble the original.

Today both Demons continue to operate from spring to fall, although they are not quite as popular as they once were. Demon operates with 2-3 trains, determined by the park's attendance. Demon at Six Flags Great America is much like its twin at California's Great America, but the California version lacks rocks around the second loop and the lights in the second tunnel; however, it still has the waterfall by the corkscrews but the water is not red. The Illinois version still has the rock formation and lights in the second tunnel. The California version has a listed height restriction of 48 inches (1,200 mm) but the Illinois version has a listed height restriction of 42 inches (1,100 mm). The 2010 season marked Demon's 30th anniversary at both amusement parks.