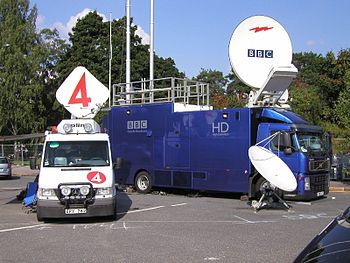 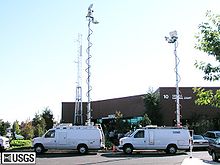 ENG is a broadcasting (usually television) industry acronym which stands for electronic news gathering. It can mean anything from a lone broadcast journalist reporter taking a single professional video camera out to shoot a story, to an entire television crew taking a production truck or satellite truck on location to do a live television news report for a remote broadcast newscast.

The term ENG was created as television news departments moved from film based news gathering to electronic field production (EFP) generated images on video tape. All film, of course, required a trip through a chemical bath (processing) before it could be viewed and edited. This generally added at least an hour from the time the film arrived back at the television station until it was ready to be seen by the viewing public (as in the cliche "Film at 11!"). Film was also difficult to handle, subject to easy scratching and other damage. Film editing was done by hand on what was known as "color reversal" film, meaning there was no negative film. Edits could not be changed without cutting segments out of the film itself. It was not that rare for the splices used for film edits to break on the air when the film was being sent through a TV station's film chain for inclusion in newscasts. While a wonderful medium for the creation of motion pictures and documentaries, filmmaking presented many difficulties for use in local television news. The use of film in news gathering virtually disappeared by the end of the 1980s.

It meant that the news gathering and the reporting process became one continuous cycle, with little pause between arriving at a news site and putting the story on the air. Coupled with live microwave and/or satellite trucks, reporters were able to show live what was happening, bringing the audience into dramatic news events. This also led to reporters being live at news scenes long after news events had occurred, such as a reporter standing on an empty, darkened street five hours after a fire had been extinguished. Reporters now find themselves standing in front of empty office buildings to add "drama" and authority to a scene that occurred many hours previously.

It can be argued that News organizations like CNN and others could not have existed successfully during the era of film technology. As it happened, CNN began its news transmissions in 1980, just as ENG was starting to come into its own. The technology had not yet been fully perfected and integrated with satellites and microwave, which accounted for some of the clumsiness of early CNN transmissions. However, ENG proved to be a crucial development for all television news. With news recorded on U-matic 3/4" videocassette recorders (VCR) was far easier to video edit, duplicate and distribute and, over time, control of the technical processes passed from highly trained broadcast engineers to television producers and television writers. This made the process less complicated, quicker and easier. In the film era, news stories were often transferred to bulky two inch video tape for distribution and playback, which made the content cumbersome to access, something that an all news channels requires repeatedly.

While it brought many advantages to television news gathering and reporting, at first ENG involved considerable compromise. Contrary to popular belief, ENG cameras and recorders were heavier and bulkier than most film equipment. An ENG camera required a heavy 3/4 inch cassette tape recorder to be carried along side it. It was virtually impossible for a camera operator to run carrying such equipment, whether away from danger or toward a news event. Editing was done on expensive, dual video tape arrangements with an edit controller in the middle. Each scene recorded on tape had to be searched out on the master recording, which meant that news stories were often slapped together with whatever could be managed by air time.

The development of Betacam and other compact half inch cassette formats allowed the integration of the field recorder into a single, shoulder mounted arrangement which was a major advancement in news gathering, while producing lifelong back injuries to many who carried the cameras on a daily basis[citation needed]. With these professional "camcorders", there was no longer a need for an umbilical cord between the camera and recorder. As a result, television crews could more safely venture into dangerous situations, like war zones and hurricanes. The development of cameras and recorders that could record in digital formats in the 1990s and early 2000s meant that various new forms of recording devices could be used, including hard disc drives, solid state media and much smaller video tape formats, such as DVCPro.

It seems likely the ENG will fade as a terminology for news gathering, since virtually all news is gathered and processed electronically. At the start, producers and assignment editors would say, "I'm sending the ENG crew", to distinguish from those still using film. The term was also used so that those discussing electronic methods would clearly understand that they were not discussing film. 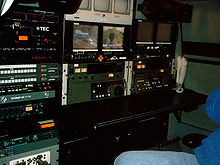 Equipment inside a KSTP-TV news van.

ENG became a catch-all term for various elements of the electronic news gathering process, including the use of point-to-point terrestrial microwave signals to backhaul the remote signal to the studio. In modern news operations, however, it also includes SNG (satellite news gathering) and DSNG (digital satellite news gathering). ENG field operations are usually done with a specially modified truck or van. Terrestrial microwave vehicles can usually be identified by their masts which can be extended up to 50 feet (15 m) in the air (to allow line-of-sight with the station's receiver antennas), while satellite trucks normally use a dish that points skywards towards one of the geostationary communications satellites. New phased array satellite antennas are, as of 2010, being adapted from military and aircraft applications for news gathering by networks and local stations. These systems will allow broadcast live from moving vehicles.[citation needed]

Recently, with the advent of high quality, low latency video encoding for IP (H.264/MPEG-4 AVC or wavelet), lower-cost alternatives to expensive proprietary microwave solutions have entered the market.[citation needed] These are based on COFDM and OFDM technology such as IEEE 802.11 and 802.16. More compact, significantly less expensive systems that use licensed or unlicensed frequencies are becoming available. These systems typically use highly asymmetric network design and rely on technologies such as multicast or RTP over UDP to achieve similar performance to high end-microwave. Since the video stream is already encoded for IP, the video can be used for traditional TV broadcast or Internet distribution without modification (live to air).

As Mobile industry continues deploying 3G/4G, there is a whole new generation of ENG products that have appeared. Often, they are very compact, as small as a backpack. Some of them aggregate multiple mobile data lines to deliver a HD quality content live.

The interior of DSNG, satellite trucks and microwave vans resemble small control rooms on wheels. With digital evolution, bulky tape editing systems are being replaced with single computers using multiple monitors or the computer's screen. An edit suite, which used to weigh over one hundred pounds, can now be replaced by a laptop computer. This is made possible by the fact that digital video is easier to transport (inside and outside an edit system), because it takes less bandwidth. There are many other qualities available through digital video that were previously unavailable or only through systems costing hundreds of thousands of dollars. In its essence, digital video allows the manipulation of video scenes more easily because all of the scene is translated into computer language, thus making it accessible to the computer instead of a fixed video frame.

In the U.S. there are ten ENG video channels set aside in each area for terrestrial microwave communications, with frequency coordination typically done by the local Society of Broadcast Engineers chapter rather than the FCC. Use of these channels is restricted by Federal regulations to those holding broadcast licenses in the given market. Channels 1 to 7 are in the 2 GHz band and channels 8,9 and 10 are in the 2½ GHz band. In Atlanta for example, there are two channels each for the four news TV stations (WSB-TV, WAGA, WXIA-TV, WGCL-TV), one for CNN, and another open for other users on request, such as GPB.

Traditionally, the FCC has assigned microwave spectrum based on historic patterns of need and through the application/request process. With the popularity of the Internet and other uses of radio spectrum growing in the 1990s, the FCC made available some bands of spectrum as unlicensed channels. This included spectrum for cordless phones and wi-fi. As a result, some of these channels have been used for news gathering by websites and more informal news outlets. One major disadvantage of unlicensed use is that there is no frequency coordination, which can result in interference or outright blocking of signals.