Eye-gouging is a serious offence in rugby union where a player uses hands or fingers to inflict pain in an opponent's eyes. The game's laws refer to it as "contact with eyes or the eye area of an opponent" but such incidents are usually referred to as "eye-gouging" among players and in the media.[1]

The laws of rugby union define foul play as: "Anything a player does within the playing enclosure that is against the letter and spirit of the Laws of the Game. It includes obstruction, unfair play, repeated infringements, dangerous play and misconduct which is prejudicial to the Game". Specifically, they state that "A player must not do anything that is dangerous to the opponent".[2]

International Rugby Board Regulations provide for punishment for contact with eyes or the eye area of an opponent.[3]

Although this is usually called "eye-gouging" by the media, fans and players, the term "gouging" is not used in the IRB's laws or regulations, which do list degrees of gravity of the offence. The IRB themselves have used the term in a 2009 statement: "The IRB are firmly of the view there is no place in rugby for illegal or foul play and the act of eye-gouging is particularly heinous".[4]

Scales of the offence

Following two high-profile test match incidents, involving Schalk Burger and Sergio Parisse, during the same week in June 2009, the IRB stated that it would review the sanction structure for this type of offence "in order to send out the strongest possible message that such acts will not be tolerated".[4]

The regulations provide a scale of seriousness:[3]

Eye-gouging in Rugby Union is a relatively modern development in the British Isles and Northern Hemisphere.[citation needed] Punishments for eye gouging in the Northern Hemisphere are seen by some journalists as being harsher than for similar offenses seen in Southern Hemisphere countries.[5][6] South African national coach, Peter De Villiers stated he did not believe that an incident for which Schalk Burger was yellow carded merited any punishment.[7] In 1992, Richard Loe made contact with Greg Coopers eyes in the National Provincial Championship.[8] The event took the New Zealand Rugby Union's disciplinary committee nine hours to come up with a punishment.[8] According to John Daniell, a New Zealand lock who played for nearly a decade in France, eye gouging is fairly common and considered "a way of life" in French rugby, where it is known as "la fourchette".[9]

Punishment for eye-gouging has been subject to debate depending on interpretation.[10] 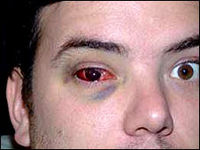 As well as many cases involving professional rugby union, the case of Clarence Harding, an amateur player, has received considerable coverage due to the extreme damage caused to his eye.[11][12][13] Harding was left without sight in his right eye and can no longer play rugby, and the injury has affected his livelihood and has since had the eye removed due to the pain.[14] Although Matt Iles, the player alleged to have injured Harding, was found not guilty by the RFU, who could not determine which player was responsible,[15] Maidstone RFC were fined £2,000 and deducted 50 points after being found "guilty of conduct prejudicial to the interests of the game".[16]

On 2 October 2010, Gavin Quinnell suffered an eye injury during a game between Llanelli and Cross Keys, from which he lost the sight in his left eye.[17] The incident was under investigation by the Welsh Rugby Union and Gwent Police, with the police arresting the perpetrator. However, the Crown Prosecution Service advised against prosecution, leading to the dropping of criminal charges, and the WRU eventually dropped its citing complaint, to the self-described shock of the Quinnell family, one of the most prominent in Welsh rugby.[18]

This is a list of cases where eye-gouging has happened at top level or international rugby union matches. It is shown in chronological order; international matches are highlighted. Players banned for contact with eyes or the eye area of an opponent as well as eye-gouging are included.

^ Note a: Prior to the announcement of the RFU's nine-week ban on 11 April 2011, Cueto had received a six-week ban from his club. The bans ultimately ran concurrently.