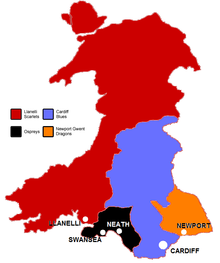 The Ospreys are one of the five original clubs of the Welsh Regional Rugby Era. The club came into being in the summer of 2003 when the WRU controversially elected to reduce the current top tier of Welsh professional rugby from nine clubs into five regions, attempting to mirror the successful formats in Ireland and the Southern Hemisphere countries of South Africa, Australia and New Zealand.

The Ospreys represent Neath Port Talbot, Swansea, and areas of the Upper Swansea Valley. The team was initially created as a partnership between the area's two most successful clubs – Neath RFC and Swansea RFC – who still retain ownership of the club on a 50:50 basis.

In summer 2004, due to the liquidation of the Celtic Warriors region, Neath-Swansea Ospreys had their borders extended to cover much of the Bridgend and Ogmore areas to the east. However, for logistical reasons, it was decided that no home games would be played at Bridgend RFC's Brewery Field.

In April 2006, it was announced that noted former New Zealand All Blacks scrum half Justin Marshall had signed to play for Ospreys. In November 2006 when it became apparent that Wales 'A' would not be able to face Australia midweek during their November tour, the Ospreys became the first Welsh region to play a major international side since regional rugby was introduced, a match they won 24–16.[2]

The Ospreys won the Celtic League during the 2006/07 season, topping the league by a single point and taking the title with an away win at Borders. Winning the Celtic League for a second time meant the Ospreys were the first team to have won the Celtic League twice. In February 2008, the Ospreys provided 13 of the starting line-up for Wales in their Six Nations match against England, setting a new record for the number of players from one region playing for their national side. During the 2007/08 season the Ospreys reached Quarter-final of the Heineken Cup for the first time but unexpectedly lost to Saracens. The following week they won the EDF Energy Cup beating Leicester Tigers at Twickenham. On 16 May 2008, head coach Lyn Jones, who to that point had been Ospreys' only coach, resigned.[3]

The term Ospreylia[4][5][6] has been adopted by the region and its supporters as a description of the geographical area covered by the region, with supporters known as Ospreylians. Peter Black, Assembly Member for south west Wales has declared himself as AM for Ospreylia on his own blog.[7]

Scott Johnson, the former Head Coach of the Welsh national team, and Attack Coach when Wales won the Six Nations Championship Grand Slam in 2005 for the first time in 27 years, was announced as Director of Coaching at the Ospreys on 29 January 2009. Widely recognised as an excellent technical coach who has inspired fierce loyalty and admiration from players whom he has coached and is notable for producing teams who play inventive, original, entertaining and attacking rugby, Johnson is in overall charge of the Ospreys coaching and playing matters.

On 9 May 2009 the Ospreys announced the signing of the noted former New Zealand All Blacks captain Jerry Collins. Collins had been a stalwart at blind-side flanker for the All Blacks, since 2004 but retired from international rugby in 2008. He can also play in the No. 8 and openside flanker positions. He is regarded as one of the most fearsome players in his position in world rugby. He is revered for his tenacity, fierce physicality and ability to play through pain. He is also widely regarded as one of the most intimidating players in the rugby world with his size and brutal tackling. On 29 May 2010, the Ospreys won the 2009–10 Celtic League by defeating Leinster in the final by 17–12 at the RDS.[8]

On 23 February 2007, the Ospreys played their first 'A' team match, against Newport-Gwent Dragons 'A' at Bridgend, which was the first 'A' match fixture for any of the Welsh regional sides. They lost the match 22–10.

They since went on to play Worcester 'A' in April, a game which they lost 24–23 to an injury-time penalty.

In their first two seasons, the Ospreys shared their home games between St Helen's (home ground of Swansea RFC) and The Gnoll (home ground of Neath RFC). Since their third season in 2005–06, they have played at the purpose-built 20,000 seat Liberty Stadium in Landore, Swansea, which is shared with Swansea City FC. The Liberty Stadium, with double the capacity of St Helen's, has seen a capacity crowd for the matches against international tourists Australia (1 November 2006[9]) and against local rivals the Scarlets.[10]

The Ospreys shirt for 2010–11 features a combination of black and purple, the colour of status in Ancient Rome.The Ospreys' shirt for the 2009/10 season was mainly black and gold. The kit is currently manufactured by Kooga who have produced all Ospreys kit since their innovation in 2003. The shirt's primary sponsor is npower renewables, with secondary sponsorship including Worthington's, Trade Depot, Persimmon, Taylors Regional Food, The Trade Center Wales, Solo Service Group, John West Food Ltd and Cuddy Group. The Ospreys' jersey is currently the second most popular by sales figures throughout the United Kingdom and Ireland, behind Munster.[11]

The following players were selected for the British and Irish Lions touring squads while playing for the Ospreys.

* Includes 2 "Free Weekends" which equated to 4 points each