Their logo is the design of a bull and basketball with the state of Texas in the background. After the San Antonio Spurs purchased the franchise, the team colors and logo were changed to reflect the silver and black motif used by the Spurs.

The Columbus Riverdragons franchise from Columbus, Georgia was awarded to the city of Austin, Texas in mid-2005 and the new name was unveiled on August 10, 2005. The Toros began play during the 2005–06 season. Their official colors were originally red, blue, and gold. The Toros name is currently the only NBA-associated team and first D-League team to possess a nickname of Spanish origin. Along with the Asheville Altitude and the Huntsville Flight sold to Southwest Basketball, LLC, the Columbus Riverdragons moved to Austin in 2005.

On February 22, 2007, head coach Dennis Johnson died of an apparent heart attack after a workout with his players.[1] After an interim coach guided the team for the rest of that season, Quin Snyder was named as the team's head coach for 2007–08. [2] 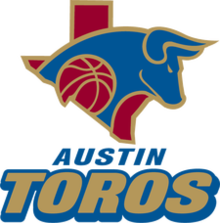 On June 28, 2007, the Toros were acquired by the four-time NBA champion San Antonio Spurs, becoming the second D-League team ever to be owned by an NBA team, after the Los Angeles D-Fenders were purchased by the Los Angeles Lakers in 2006. [3]

On August 9, 2010, the Toros announced it would move to the Cedar Park Center from the Austin Convention Center and would play in their new facility starting in the 2010-11 season.