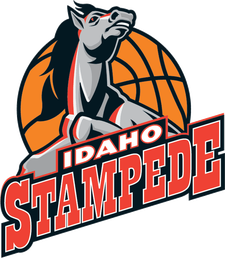 The Idaho Stampede are an American team that play in the . They are based in the Boise, area and play at the in Boise, as of 2005. They were founded as a member of the in and were league runners-up in the 2003-04 season, losing to the . After the 2005-06 season, the Stampede announced they will be joining the NBA Development League. Their NBA affiliates are the and the . In their inaugural D-League season, the Stampede won the Western Division title, tying for the best record in the league.

On , , the Stampede defeated the , 108-101, in Game 3 of the D-League finals. It was the first title in team history, in either the CBA or the D-League. Earlier in the season, in , the team had played host to the annual D-League Showcase, in which all the league's teams played two games each in a five-day period.