CobraNet is a combination of software, hardware and network protocols designed to deliver uncompressed, multi-channel, low-latency digital audio over a standard Ethernet network. Developed in the 1990s, CobraNet is widely regarded as the first commercially successful implementation of audio over Ethernet.[2][3]

CobraNet was designed for and is primarily used in large commercial audio installations such as convention centers, stadiums, airports, theme parks and concert halls. It is most useful in applications where a large number of audio channels must be transmitted over long distances or to multiple locations.

CobraNet is an attractive alternative to analog audio, which suffers from signal degradation over long cable runs due to electromagnetic interference, high-frequency attenuation, and voltage drop. Additionally, the use of digital multiplexing allows audio to be transmitted using much less cabling than analog audio.

CobraNet was developed in 1996 by Boulder, Colorado-based Peak Audio. Initial demonstrations were of a 10 Mbit/s point-to-point system with limited channel capacity. The first permanent installation of CobraNet in this early form was to provide background music throughout the Animal Kingdom theme park.[4] The first commercial use of CobraNet as an interoperable standard was during the half-time show at Super Bowl XXXI in 1997.[5]

CobraNet was first introduced as an interoperable standard in collaboration with manufacturer QSC Audio Products. QSC was the first to license the technology from Peak Audio and marketed it under the RAVE brand. At this point CobraNet had graduated to Fast Ethernet and used a patented collision avoidance technique[6] to carry up to 64 channels per Ethernet collision domain.

CobraNet was subsequently enhanced to support and eventually require a switched Ethernet network. An SNMP agent was added for remote control and monitoring. Support for higher sample rates, increased bit resolutions and lowered latency capabilities were later introduced in an incremental and backwards-compatible manner.

In May 2001, Cirrus Logic announced that it had acquired the assets of Peak Audio.[7] Leveraging Cirrus DSP technology, a low-cost SoC implementation of CobraNet was developed and marketed. CobraNet has been widely licensed by commercial audio equipment manufacturers and installed in thousands of facilities worldwide. 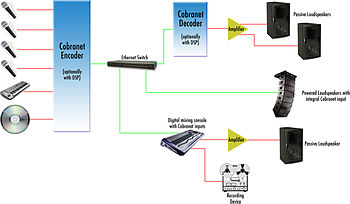 CobraNet is transmitted using standard Ethernet packets. Instead of using TCP/IP packets, CobraNet transfers data using data link layer packets, which travel quickly through hubs, bridges and switches, and are not as susceptible to the latency and QoS problems commonly found in streaming protocols using a higher transport layer. However, since CobraNet does not use an IP protocol, its packets cannot travel through routers, and therefore it is limited to use on a LAN; CobraNet cannot be used over the Internet. The network over which CobraNet is transmitted must be able to operate at a minimum of 100 Mbit/s (also known as Fast Ethernet). All CobraNet packets are identified with a unique Ethernet protocol identifier (0x8819) assigned to Cirrus Logic.[10]

While CobraNet has been shown to function properly over wireless networks under ideal conditions,[citation needed] bandwidth and reliability issues associated with typical 802.11 wireless networks tend to cause frequent dropouts and fatal errors.[15] However, wireless communication of CobraNet data can be reliably accomplished using lasers.[16]

CobraNet data is organized into channels and bundles. A typical CobraNet signal can contain up to 4 bundles of audio travelling in each direction, for a total of 8 bundles per device. Each bundle houses up to 8 channels of 48 kHz, 20-bit audio, for a total capacity of 64 channels. CobraNet is somewhat scalable, in that channel capacity increases when 16-bit audio is used, and channel capacity decreases when 24-bit audio is used. The number of channels allowed per bundle is limited by the 1,500-byte Ethernet MTU.[10]

There are three types of bundles: multicast, unicast, and private:[10]

As long as multicast bundles are used sparingly, it is virtually impossible to exceed the bandwidth of a 100 Mbit network with CobraNet data. However, there are limitations to the maximum number of bundles that can be sent on a network, since the conductor must include data in its beat packets for every bundle on the network, and the beat packet is limited to 1,500 bytes. If each device is transmitting one bundle, there may be up to 184 transmitters active simultaneously (for a total of 184 bundles). If each device is transmitting four bundles, then only 105 transmitters can be active, although they would be producing a total of 421 active bundles. The use of private bundles does not require any additional data in the beat packet, so these network limitations can be sidestepped by using private bundles.[17]

Four main types of packet are used in the transmission and synchronization of CobraNet:[10]

The buffering of audio data into Ethernet packets typically incurs a delay of 256 samples (or 5 1⁄3 milliseconds). Additional delays are introduced through A-D and D-A conversion (typically 10–50 samples). Latency can be reduced by sending smaller packets more often. In most cases, the programmer can choose the desired CobraNet latency for a particular CobraNet device (5 1⁄3, 2 2⁄3, or 1 1⁄3 milliseconds).[10] However, reducing audio latency has consequences:

It may seem from the table above that more information can be sent at a lower latency. However, that is not the case. More channels can be sent per bundle, but fewer bundles can be processed simultaneously by one device. So, while eight 24-bit, 96 kHz channels can be sent in one bundle at 1 1⁄3 ms latency, due to processing constraints, the CobraNet device may only be able to send and receive one bundle instead of the usual four. The bundle capacity of CobraNet devices are unique to the particular device, and are not always the same. However, below is a table illustrating the bundle capacity for a Biamp AudiaFLEX-CM DSP device. The Rx and Tx columns indicate the absolute maximum number of channels that can be received or transmitted. The Rx/Tx column represents the maximum number of channels that can be received and transmitted simultaneously.[19]

CobraNet network cards come in several varieties, some of which can support more channels than others. Additionally, CobraNet network cards have two Ethernet ports labelled "primary" and "secondary". Only the primary Ethernet port needs to be connected, but if both ports are connected they become a redundant failsafe. That is, if the primary port loses communication, the secondary port immediately takes over with no packet loss. Careful network design and topology which takes advantage of this feature can provide extremely high reliability in critical applications.[11][12]

The typical CobraNet network cards provided by Cirrus Logic are the CM-1 and the CM-2:[20]

Both cards are designed to be added to audio products by the manufacturer.

Cirrus Logic provides a software application known as CobraCAD, which assists in the design of the network on which the CobraNet system will run. It helps to identify if there are too many routers between two CobraNet devices, if a certain latency is possible given the network configuration, and other tasks. However, Cirrus Logic does not provide software to manipulate their hardware. In fact, in the simplest of cases, no software is required by the end user. For instance, a simple breakout box which converts a CobraNet signal to eight analog audio signals would require little or no configuration by the end user (apart from possibly selecting the bundle number).[21] If configuration is required (for example, in a DSP box with integrated CobraNet I/O), then the manufacturer of the device typically supplies proprietary software for that purpose.

Manufacturers who wish to integrate CobraNet connectivity into their devices must license the technology from Cirrus Logic. Many audio equipment manufacturers have included CobraNet in their products. Below is a partial list of notable examples, sorted by device type:[22]

One of the most popular and useful devices that integrates CobraNet is the audio DSP. These devices typically receive audio from CobraNet (and often from other digital or analog sources simultaneously), process the audio using digital filters and effects (for example, volume control, EQ, compression, delay, crossovers, etc.) and then output the audio via CobraNet (or other digital or analog outputs). Some DSPs even have an integral telephone hybrid, and can incorporate CobraNet and other sources into a teleconferencing application.[23]

Loudspeakers with integrated CobraNet help keep the signal chain digital for an even longer span. In a typical unpowered speaker application, the amplifier would be housed far away from the speaker, and a long speaker cable (analog) would be run between the speaker and the amplifier. The speaker cable would be subject to interference and signal loss from electrical resistance. However, a powered speaker, powered by an electrical cable and fitted with integrated CobraNet inputs, eliminates the speaker cable and replaces it with a network cable.[13][14] Since a speaker will only use one audio channel out of the bundle, many speakers with CobraNet will also have a number of analog outputs for the rest of the channels in the bundle, which is useful in speaker cluster applications.