"Boatmen" redirects here. It may also refer to a nickname for the Toronto Argonauts of the Canadian Football League. 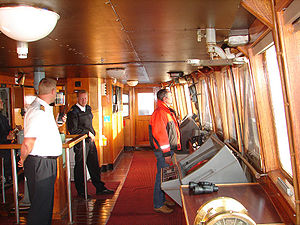 Three types of mariners are seen here in the wheelhouse: a master, an able seaman, and a harbour pilot.

A sailor, mariner, or seaman is a person who navigates water-borne vessels or assists in their operation, maintenance, or service. The term can apply to professional mariners, military personnel, and recreational sailors as well as a plethora of other uses. Etymologically, the name preserves the memory of the time when ships were commonly powered by sails, but it applies to the personnel of all vessels, whatever their mode of locomotion.

Professional mariners hold a variety of professions and ranks which are fairly standard, with the exception of slight naming differences around the world. Common categories by department include the Deck department, the Engineering department, and the Steward's department. Mariners can also be categorized by status as senior licensed mariners or unlicensed mariners.

A number of professional mariners have left the industry and led noteworthy lives in the naval services or on the shore. For example, Traian Băsescu started his career as a third mate in 1976 and is now the President of Romania. Arthur Phillip joined the Merchant Navy in 1751 and 37 years later founded Sydney, Australia. Merchant mariner Douglass North went from seaman to navigator to winning the 1993 Nobel Prize in Economics.

Seafarers hold a variety of professions and ranks, each of which carries unique responsibilities which are integral to the successful operation of an ocean-going vessel. A ship's crew can generally be divided into four main categories: the deck department, the engineering department, the steward's department, and other.

For more details on this topic, see Deck department. 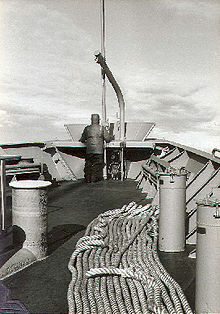 An able seaman stands iceberg lookout on the bow of the freighter USNS Southern Cross during a re-supply mission to McMurdo Station, Antarctica; circa 1981.

Officer positions in the deck department include but are not limited to: Master and his Chief, Second, and Third officers. The official classifications for unlicensed members of the deck department are Able seaman and Ordinary seaman. With some variation, the Chief Mate is most often charged with the duties of Cargo Mate. Second Mates are charged with being the medical officer, in case of medical emergency. All Three mates each do Four-Hour AM and PM shifts on the bridge, when underway at sea.

A common deck crew for a ship includes:

For more details on this topic, see Engineering department.

A ship's engineering department consists of the members of a ship's crew that operates and maintains the propulsion and other systems onboard the vessel. Marine engineering staff also deal with the "hotel" facilities onboard, notably the sewage, lighting, air conditioning and water systems. Engineering staff manage bulk fuel transfers, from a fuel-supply barge in port. When underway at sea, the second and third engineers will often be occupied with oil transfers from storage tanks, to active working tanks; Cleaning of oil purifiers is another regular task. Engineering staff are requireed to have training in firefighting and first aid. Additional duties include maintaining the ship's boats and performing other nautical tasks. Engineers play a key role in cargo loading/discharging gear and safety systems, though the specific cargo discharge function remains the responsibility of deck officers and deck workers.

A common engineering crew for a ship includes:

For more details on this topic, see Steward's department.

A typical Steward's department for a cargo ship is a Chief Steward, a Chief Cook, and a Steward's Assistant. All three positions are typically filled by unlicensed personnel.

A chief steward's duties may overlap with those of the Steward's Assistant, the Chief Cook, and other Steward's Department crewmembers.

The only time that Steward Department staff are charged with duties outside the Steward department, is during the execution of the Fire and Boat Drill.

For more details on this topic, see Seafarer's professions and ranks#Other.

Various types of staff officer positions may exist on board a ship, including Junior Assistant Purser, Senior Assistant Purser, Purser, Chief Purser, Medical Doctor, Professional Nurse, Marine Physician Assistant, and Hospital Corpsman. These jobs are considered administrative positions and are therefore regulated by Certificates of Registry issued by the United States Coast Guard. Pilots are also merchant marine officers and are licensed by the Coast Guard.

Mariners spend extended periods at sea. Most deep-sea mariners are hired for one or more voyages that last for several months. There is no job security after that. The length of time between voyages varies by job availability and personal preference.[1]

The rate of unionization for these workers in the United States is about 36 percent, much higher than the average for all occupations. Consequently, merchant marine officers and seamen, both veterans and beginners, are hired for voyages through union hiring halls or directly by shipping companies. Hiring halls fill jobs by the length of time the person has been registered at the hall and by their union seniority. Hiring halls typically are found in major seaports.

At sea, on larger vessels members of the deck department usually stand watch for 4 hours and are off for 8 hours, 7 days a week.[2]

Mariners work in all weather conditions. Working in damp and cold conditions often is inevitable, although ships try to avoid severe storms while at sea. It is uncommon for modern vessels to suffer disasters such as fire, explosion, or a sinking. Yet workers face the possibility of having to abandon ship on short notice if it collides with other vessels or runs aground. Mariners also risk injury or death from falling overboard and from hazards associated with working with machinery, heavy loads, and dangerous cargo. However, modern safety management procedures, advanced emergency communications, and effective international rescue systems place modern mariners in a much safer position.

Most newer vessels are air conditioned, soundproofed from noisy machinery, and equipped with comfortable living quarters. These amenities have helped ease the sometimes difficult circumstances of long periods away from home. Also, modern communications, especially email, link modern mariners to their families. Nevertheless, some mariners dislike the long periods away from home and the confinement aboard ship. They consequently leave the profession. 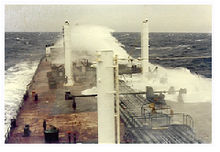 The tanker SS Overseas Alice takes seas over the bow during a 1981 run from New Orleans to Panama.

Professional mariners live on the margins of society, with much of their life spent beyond the reach of land. They face cramped, stark, noisy, and dangerous conditions at sea. Yet men and women still go to sea. For some, the attraction is a life unencumbered with the restraints of life ashore. Sea-going adventure and a chance to see the world also appeal to many seafarers. Whatever the calling, those who live and work at sea invariably confront social isolation.

Findings by the Seafarer's International Research Center indicate a leading cause of mariners leaving the industry is "almost invariably because they want to be with their families." U.S. merchant ships typically do not allow family members to accompany seafarers on voyages. Industry experts increasingly recognize isolation, stress, and fatigue as occupational hazards. Advocacy groups such as International Labor Organization, a United Nations agency, and the Nautical Institute seek improved international standards for mariners.

One’s service aboard ships typically extends for months at a time, followed by protracted shore leave. However, some seamen secure jobs on ships they like and stay aboard for years. In rare cases, veteran mariners choose never to go ashore when in port.

Further, the quick turnaround of many modern ships, spending only a matter of hours in port, limits a seafarer's free-time ashore. Moreover, some seafarers entering U.S. ports from a watch list of 25 countries deemed high-risk face restrictions on shore leave due to security concerns in a post 9/11 environment. However, shore leave restrictions while in U.S. ports impact American seamen as well. For example, the International Organization of Masters, Mates & Pilots notes a trend of U.S. shipping terminal operators restricting seamen from traveling from the ship to the terminal gate. Further, in cases where transit is allowed, special "security fees" are at times assessed.

Such restrictions on shore leave coupled with reduced time in port by many ships translate into longer periods at sea. Mariners report that extended periods at sea living and working with shipmates who for the most part are strangers takes getting used to. At the same time, there is an opportunity to meet people from a wide range of ethnic and cultural backgrounds. Recreational opportunities have improved aboard some U.S. ships, which may feature gyms and day rooms for watching movies, swapping sea stories, and other activities. And in some cases, especially tankers, it is made possible for a mariner to be accompanied by members of his family. However, a mariner’s off duty time at sea is largely a solitary affair, pursuing hobbies, reading, writing letters, and sleeping. 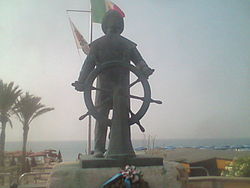 Barbarossa Hayrettin Pasha (Turkish: Barbaros Hayrettin Paşa or Hızır Hayrettin Paşa; also Hızır Reis before being promoted to the rank of Pasha and becoming the Kaptan-ı Derya (Fleet Admiral) of the Ottoman Navy) (c. 1478 – 4 July 1546) was an Ottoman admiral who dominated the Mediterranean for decades. He was born on the island of Lesbos/ Mytilini and died in Istanbul, the Ottoman capital.

Merchant seamen have gone on to make their mark on the world in a number of interesting ways. Traian Băsescu, who started his career as a third mate in 1976 is now the President of Romania. Arthur Phillip joined the Merchant Navy in 1751 and 37 years later founded the city of Sydney, Australia. Merchant mariner Douglass North went from seaman to navigator to winner of the 1993 Nobel Prize in Economics. Jimmy Carter went on to become the 39th President of the United States after service in the US Navy.

Since World War II, a number of merchant seamen have become notorious criminals. American William Colepaugh was convicted as a Nazi spy in World War II and Fritz Sauckel was convicted as a Nazi war criminal. Briton Duncan Scott-Ford was hanged for treachery in World War II. George Hennard was an American mass murderer who claimed 24 victims on a rampage at Luby's Cafeteria in Killeen, Texas. And Perry Smith's own murderous rampage was made famous in Truman Capote's non-fiction novel In Cold Blood.

Merchant sailors have also made a splash in the world of sport. In football, with Fred Blackburn in England and the likes of Dan Devine and Heisman Trophy winner Frank Sinkwich in the U.S. In track and field, American seamen Cornelius Johnson and Jim Thorpe both won Olympic medals, though Thorpe didn't get his until 30 years after his death. Seamen Jim Bagby, Jr. and Charlie Keller went on to Major League Baseball. Drew Bundini Brown was Muhammad Ali's assistant trainer and cornerman, and Joe Gold went on to make his fortune as the bodybuilding and fitness guru of Gold's Gym.

Other sporting notables include Edwin Stratton the founder of Yoshinkan UK, Dutchman Henk de Velde known for sailing solo around the world, and Briton Matthew Webb who was the first person to swim the English Channel without the use of artificial aid.

Seamen always complain about leaving their girl friends ashore, but imagine how James Dougherty felt, leaving his 17-year-old wife Marilyn Monroe on the beach. Merchant Navy steward Freddie Lennon had a surprise when he returned home to find he had a newborn son. That son would later found the musical group The Beatles.

A number of U.S. Merchant Mariners from World War II later played well known television characters. The list includes Milburn Drysdale on The Beverly Hillbillies, Archie Bunker on All in the Family, Columbo on Columbo, Jim Rockford on The Rockford Files, Steve McGarret on Hawaii Five-O, Uncle Jesse Duke on The Dukes of Hazzard, and Cheyenne Bodie on Cheyenne.

An ancient term, the word "sailor," has come to mean many things. Sailor may refer to: