The Lair of the White Worm (film)

The Lair of the White Worm (film)

Infobox_Film
name = The Lair of the White Worm 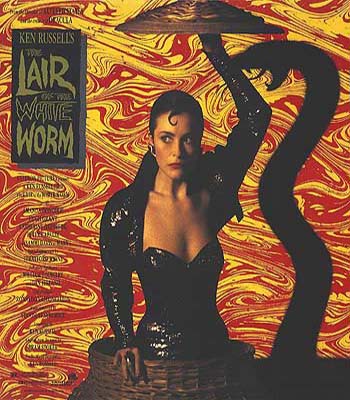 "The Lair of the White Worm" is a 1988 film based on the novel by . The film was written and directed by . The myth of the of plays out in different parts of the movie.

Angus Flint, an archaeologist from Scotland, is performing a dig at Mercy Farm, a guesthouse in owned by orphans Eve and Mary Trent. He is searching for relics left by a pagan temple constructed in the fifth century, and by a convent which was later built on the site. In the course of his dig, he finds a mysterious reptilian skull; although it appears to be a dinosaur skull, it is found at the same level as some fifth century coins.

Flint soon befriends a local nobleman, James D'Ampton, whose distant ancestor, according to legend, slew a White Worm by chopping off its head. Ernie, a local policeman, reveals that a pocket watch belonging to Eve and Mary's father Joe was found at nearby Stonerich Cavern [later revealed to be the legendary home of the White Worm] . Lady Sylvia Marsh, a reclusive neighbor of the D'Amptons who lives in Temple House, learns of this from Ernie and sneaks into Mercy Farm, examining the watch and stealing the skull. She also spits "venom" onto a cross hanging on the wall; when Eve touches this venom later, she has a hallucination involving a serpent wrapped around a cross, an image that Flint had found that morning in his digging.

Sylvia invites a boy scout named Kevin to her house, obstensibly to get him out of the rain. Instead, she paralyses him with her venom and threatens to sacrifice him to the god Dionin, since he is a virgin. But her plans are interrupted when James D'Ampton visits her; she drowns Kevin and hides his body. She confesses to Lord D'Ampton that she has had a fascination with snakes ever since recovering from a snakebite when she was ten.

While James, Mary, and Angus are exploring Stonerich Cavern, Eve is hypnotized and kidnapped by Sylvia, who takes her back to Temple House. As she orders Eve to disrobe, she explains that she is an immortal priestess of Dionin and that Eve is a reincarnation of one of the nuns who built the convent. Because Eve is also a virgin, this makes her an ideal sacrifice to Dionin. While being forced to phone her sister to cover Sylvia's tracks, Eve manages to break free of her hypnosis long enough to reveal the name Dionin to her sister.

Angus recognizes the name as a "pagan snake god", and James remembers the name from Eve's hallucination. Mary is then convinced that Eve must have been kidnapped. James deduces that Sylvia Marsh has kidnapped Eve to offer her as a human sacrifice.

James develops a plan to incapacitate Sylvia by playing snake charming music through loudspeakers attached to his roof. This is successful, but when Mary and Angus search Temple House they find Dorothy Trent instead. She has apparently become a snake-vampire much like Sylvia, and upon hearing the music sets off for D'Ampton Manor. When a power cut stops the music, James is forced to bisect Dorothy in self-defense, while Sylvia steals the record before the power can come back on.

The next day, Mary and Angus discover that Ernie has also fallen under the sway of Lady Sylvia. Angus fends him off with bagpipe music, and is eventually forced to kill him. Nevertheless, they are captured by Lady Sylvia and taken to watch the sacrifice of Eve, who is suspended near-naked and barefoot over a well. Sylvia places a wreath on Eve's head and attempts to deflower the poor girl, but Lord D'Ampton attempts to smoke out the Worm. It wakes up early, and a race begins to settle Eve's fate. In the ensuing struggle, Angus pushes Sylvia down the well which connects to the cavern (where she herself is devoured by the Worm), rescues Eve, and then throws a hand grenade at the Worm.

However, it develops that the antivenom he had used on himself and Eve was accidentally swapped with arthritis medication...

The film was shot at in and on location at Gaddesden Place near the Gade Valley, and in the , Derbyshire.