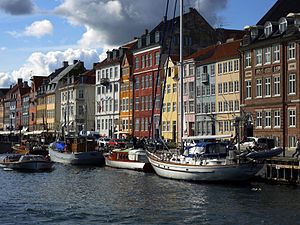 Nyhavn (pronounced [ˈnyhɑʊ̯n]) is a 17th century waterfront, canal and entertainment district in Copenhagen, Denmark. Stretching from Kongens Nytorv to the harbour front just south of the Royal Playhouse, it is lined by brightly coloured 17th and early 18th century townhouses and bars, cafes and restaurants. Serving as a "heritage harbour", the canal has many historical wooden ships.

Nyhavn was constructed by King Christian V from 1670-73, dug by Swedish war prisoners from the Dano-Swedish War 1658–1660. It is a gateway from the sea to the old inner city at Kongens Nytorv (King's Square), where ships handled cargo and fishermens' catch. It was notorious for beer, sailors, and prostitution. Danish author Hans Christian Andersen lived at Nyhavn 18 for some years. 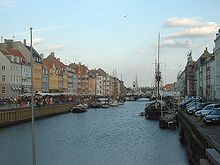 In the mid-1960s, the Nyhavn Society (Danish: Nyhavnsforeningen) was founded with the aim of revitalising Nyhavn. In 1977, Nyhavn was inaugurated as a veteran ship and museum harbour by Overborgmester i København (Copenhagen’s Lord Mayor) Egon Weidekamp.

The northern side of Nyhavn (odd numbers) is lined by brightly coloured townhouses built with wood, bricks, and plaster. The oldest house, at No. 9, dates from 1661.

The southern side of Nyhavn (even numbers) has lavish mansions lining the canal, notably Charlottenborg Palace at the corner of Kongens Nytorv.

Nyhavn Veteran Ship and Museum Harbour, occupying the inner section of Nyhavn, between the Nyhavn Bridge and Kongens Nytorv, is lined with old ships. From the foundation of the heritage harbour in 1977, the south side of the canal has been reserved for museum ships owned by the Danish National Museum, which received a donation of carefully restored ships from A. P. Møller, while the northern side of the canal was put at the disposal of the Nyhavn Society and privately-owned, still usable wooden ships. Harbor ships include: 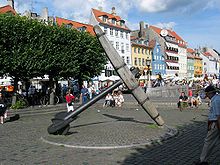 The Memorial Anchor at the end of Nyhavn

The great Memorial Anchor (Danish: Mindeankeret) at the end of Nyhavn, where it meets Kongens Nytorv, is a monument commemorating the more than 1,700 Danish officers and sailors in service for the Navy, merchant fleet or Allied Forces, who sacrificed their lives during World War II. The Anchor was inaugurated in 1951, replacing a temporary wooden cross erected on the spot in 1845, and has a plaque with a monogram of King Frederik VII on it. The Memorial Anchor is from 1872 and was used on the Frigate Fyn (Funen), which was docked at Holmen Naval Base during the Second World War. Every year on May 5th – Denmark’s Liberation day 1945 – an official ceremony is held to honour and commemorate the fallen at the Memorial Anchor.[1] 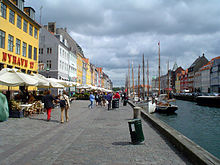 Bars and restaurants lining the northern, sunny side of Nyhavn

Along its northern, sunnier side, Nyhavn is lined with bars and restaurants facing the harbor. Even in cooler weather the heartier types sit outdoors with a beer and a blanket over their legs, provided by the restaurant on each seat. Nyhavn serves as a hub of canal tours.

Kongens Nytorv metro station is located at the end of Nyhavn, though situated at the far end of the namesake square outside Magasin du Nord. The station is served by both lines M1 and M2 of the Copenhagen Metro.

The Copenhagen Harbour Buses has a stop at the mouth of Nyhavn. All four routes of the harbour buses, Routes 901, 902, 903 and 904, stop at the bus stop next to the Royal Playhouse.