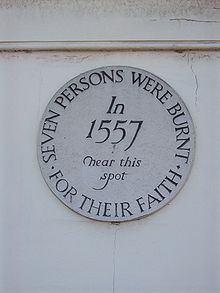 Plaque in Maidstone, Kent, commemorating those burned nearby.

The Marian Persecutions were carried out against religious reformers, Protestants, and other dissenters for their heretical beliefs during the reign of Mary I of England. The excesses of this period were mythologized in the historical record of Foxe's Book of Martyrs. English Protestants developed a lasting hatred of the queen they called "Bloody Mary", as well as Bishop Edmund Bonner, the Bishop of London, for their involvement in the persecution. Heresy was a crime against the crown of England, and like the Elizabethean hangings of thousands of Catholics, the monarch did not administer the executions. Rather they were conducted by the queens' privy councils as matters of state.

The English Reformation resulted in the end of Roman ecclesiastical governance in England, the assertion of royal control over the Church, the elimination of Catholic institutions such as monasteries and chantries, the prohibition of Catholic worship and the institution of Church of England services and clergy. During the Reformation in England, many people were caught in the middle of a political war between Catholic and Protestant ascendancy. What distinguished the Henrician Reformation in England from the Protestant Reformation in mainland Europe (notably the Holy Roman Empire) was that in England, it was a political reformation that took control of land and wealth out of the hands of the popular Catholic clergy and transferred it to large lay landowners. An important year in the English Reformation was 1547, when Protestantism became a new force under the child-king Edward VI, England's first Protestant ruler. Edward died at age 15 in 1553 leaving the throne against Parliament's will to Lady Jane Grey who held it for nine days before Edward's Catholic half-sister Mary deposed her and assumed the crown as Henry VIII stipulated in his Act of Accession. Mary reigned for just five years before dying, 1553-1558. During her reign, she repaired the severed relationship with Rome and returned England to Catholicism. Protestants opposed Mary's actions. Many people were exiled, and hundreds of dissenters were burned at the stake, earning her the nickname "Bloody Mary".[1] It is true that popular non-Catholic propaganda of the day has persisted to this day, and it makes no mention of Queen Elizabeth I's (in her 45 years reign) exponentially greater persecution and hanging of Catholic laypeople[citation needed] and clergy[citation needed] (and some 100 or so Protestant clergy as well).[citation needed]

After the accession of Queen Mary I to the English throne in 1553, and Mary's subsequent decree of Catholicism, Protestants faced a choice: exile, reconciliation/conversion, or punishment.[2] Several of those who remained in England to profess and defend their Protestant beliefs would be executed, burned alive by being restrained over open flames, and thus their supporters considered them martyrs. Mary's privy council had some 284 Protestants burned at the stake; the victims of her campaign were disproportionately male (only 56 of the condemned were women). 30 died in prison.[3] While the so-called “Marian Persecutions” began with four clergymen,[4] relics of Edwardian England’s Protestantism, the tendentious record of events Foxe’s Book of Martyrs offers an interesting account of the executions, which branched well beyond the anticipated targets – high-level clergy. Tradesmen were also burned, as well as married men and women, sometimes in unison; at least one couple was burned alive with their daughter.[4]

However bloody the end, the trials of Protestant heretics were judicial affairs, adhering to a strict legal protocol under the privy council, with Parliament's blessing.[5] During the session which restored the realm to "papal obedience" parliament reinstated the heresy laws.[4] From 20 January 1555, England could legally punish those judged guilty of heresy against the Catholic faith.[6] Thus it became a matter of establishing the guilt or innocence of an accused heretic in open court – a process which the lay authorities employed to reclaim "straying sheep" and to set a precedent for authentic Catholic teaching.[7] Problem was, there was no formalized canon law within the Catholic Church at this time, though it had been forming since the Church invented jurisprudence in the 12th Century. Also, there were no seminaries and few standardized requirements for Catholic clergy until after the Council of Trent, and the Catholic Church was besieged by men of political bent infiltrating the clergy to gain control of land and wealth throughout Western Europe. Not even the papacy was safe from these kinds of "secular" influence until after the Council of Trent.

If found guilty, the accused were first excommunicated, then handed over to the secular authorities for execution.[7] The official records of the trials are limited to formal accusations, sentences, and so forth; the documents to which historians look for context and detail are those written by the accused.[7]

Before Mary's ascent to the throne, John Foxe, one of the few clerics of his day who was against the burning of even obstinate heretics, had approached John Rogers to intervene on behalf of Joan Butcher, an Anabaptist who was sentenced with burning.[12] Rogers, a Protestant preacher and royal chaplain, refused to help, as he supported the burning of heretics. Rogers claimed that the method of execution was “sufficiently mild” for a crime as grave as heresy.[13] Later, after Mary I came to power and converted England to Catholicism, John Rogers spoke quite vehemently against the new order and was burned as a heretic.[14]

Throughout the course of the Persecutions, Foxe contends that 300 individuals were burned for their faith. However, no complete list of these names has ever been documented. These people are commemorated with an elaborate gothic memorial in Oxford, England.[15] They are known as the "Marian Martyrs".