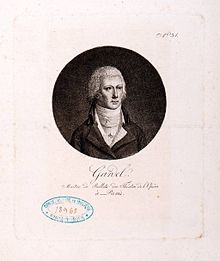 Maximilien Gardel (18 December 1741, Mannheim - 11 March 1787, Paris) was a French ballet dancer and choreographer of German descent (he was the son of Claude Gardel, ballet master to king Stanisław Leszczyński, and elder brother of Pierre Gardel, who succeeded Maximilien as ballet master of the Paris Opera on his death).

He débuted at the Académie royale de Musique in Paris in 1759 and five years later became a soloist there. Sharing dance rôles with Gaëtan Vestris, Gardel took over from him in 1772 : in the reprise of Castor et Pollux by Rameau, he danced with neither mask nor wig (then judged unimaginable) so as not to be deceived by his rival. In 1773 he and Jean Dauberval became Vestris' assistants as ballet master then, in 1781, Gardel took over the role on his own (succeeding Noverre).