Russian ballet is a form of ballet characteristic of or originating from Russia. In the early 19th century, the theaters were opened up to anyone who could afford a ticket. There was a seating section called a rayok, or 'paradise gallery', that consisted of simple wooden benches. This allowed non-wealthy people access to the ballet, because tickets in this section were inexpensive.[1]

Other Russian ballet companies include:

There are also a number of companies who have been called, or included in their name, Moscow Ballet.

There are several methods of ballet in Russian ballet. The most widely used is the Vaganova method, which was named after the very famous ballerina and teacher, Agrippina Vaganova.[4] 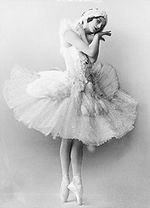