The National Ballet School of Canada

The National Ballet School of Canada

The National Ballet School of Canada is a classical ballet school located in Toronto, Ontario, Canada. Along with the Royal Winnipeg Ballet School, it is one of the leading ballet schools in Canada and one of the most renowned internationally. Many graduates achieve employment with professional ballet companies around the world, most notably with the National Ballet of Canada.

The National Ballet School is the associate school of the National Ballet of Canada, which was formed in 1951 by the English ballet dancer Celia Franca. Franca had previously been a leading dancer with ballet companies in the United Kingdom, before Dame Ninette de Valois recommended her as the best candidate to form a new Canadian ballet company modelled on her own Sadler's Wells Ballet, better known today as The Royal Ballet.

Oliphant became the School's first Artistic Director and having studied the Cecchetti method under Dame Marie Rambert and Antony Tudor, she chose the method as the foundation for the School's training programme. The Cecchetti method taught at the school was the original syllabus devised by Enrico Cecchetti himself in collaboration with the dance writer and historian Cyril Beaumont, and which is today preserved and examined worldwide by the Imperial Society of Teachers of Dancing. Students of the school were notably assessed by examiners from the United Kingdom, to ensure complete impartiality.

The School had been based in a former Quaker meeting house at 111 Maitland Street in Toronto, a building purchased for the school by the National Ballet Guild at a cost of $80,000. The first enrolment of full time students included 27 females, with 202 students enrolling for part time study, of which nine were boys. 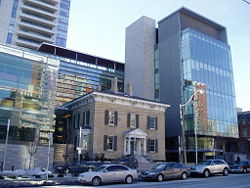 The National Ballet School provides a full-time program which combines classical ballet training with academic education from Grades 6 through 12 at its boarding school. The School offers intensive specialized dance training after Grade 12 and a full-time teacher-training program.

The National Ballet School plays a significant role in revitalizing a neglected part of the city. Its stunning architectural form and its seamless ease with neighbouring heritage buildings help bring a sense of elegance to its site. Located on 400 Jarvis street, the building faces onto the busy street with tall glass structures, creating connections with the exterior and the interior. Composed of 4 main building masses, the NBS scheme is admired for its seamless wholeness. Several architects have played a significant role in building and expanding the NBS. Project Grand Jete, which is the expansion plan for the Celia Franca Centre was planned and executed by Kuwabara Payne Mckenna Blumberg Architects. In collaboration the Goldsmith Borgal & Company, executed the restoration and redesign of the heritage buildings. These separate buildings play and interact with one another to achieve a harmonious unity. In architectural aspect and in cultural aspect this building captures the beauty of the history of its site and successfully reform it to achieve a grander and more modern presence within the city.

The School was founded in 1959 by two Englishwomen, Celia Franca and Betty Oliphant, on the model set forth by England's Royal Ballet and its associated Royal Ballet School. It was directed for many years by co-founder Betty Oliphant (also British) to train dancers primarily for the National Ballet of Canada, but also for companies across Canada and around the world. Alumni and alumnae of the school include Martine van Hamel, Frank Augustyn, Neve Campbell, Rex Harrington, Karen Kain (current Artistic Director of the Company), James Kudelka (former Artistic Director of the Company), Veronica Tennant, Martine Lamy, John Alleyne, and Mavis Staines. Miss Staines is the current Artistic Director of The National Ballet School of Canada.

Since 1959, the School has trained hundreds of professional dance teachers – teachers who in turn have inspired and guided tens of thousands of young dancers in every part of Canada and on all five continents. It is one of the preeminent training facilities in the world for both dancers and teachers, setting crucially extraordinary standards for ballet internationally.

Each year, The School conducts outreach tours in twenty or more cities across Canada. Students have come to The National from every province in Canada – and from many other countries including the United States, Japan, Korea, and Sweden.

Admission to The National Ballet School is highly competitive. Students are accepted after an audition on the basis of merit alone, with financial assistance available depending on family means. Over fifty percent of NBS families receive some sort of financial aid. Students who make it through the initial auditions must pass an intensive summer at The School continuing to audition, and some are then accepted and asked to train at The School in the fall. At the end of each academic year, students are evaluated and asked back to continue training the following year if they have shown progress and promise.

The School's mission has expanded to train students for ballet companies in Canada and internationally. Alumni and alumnae of The School can be seen dancing at many prestigious companies world-wide, including The Royal Ballet, Nederlands Dans Theater, (the former) Frankfurt Ballet, American Ballet Theatre, The Royal Danish Ballet, The Royal Swedish Ballet, The San Francisco Ballet, New York City Ballet, The Joffrey Ballet, and many others.

In addition to the core Professional Ballet/Academic Program, the School offers a post-secondary advanced dance training program (IDP: Intensive Dance Program, often affiliated with the apprenticeship program with the Company), a Teacher Training Program (TTP), summer school, student and adult recreational classes throughout the year, teachers’ seminars, and teacher and pianist workshops as part of its annual national recruitment tour. Over 700 students and their families access The School’s programs each week with an additional 150 auditionees joining the student body for the annual summer school.

The School originally trained most of its students in the British version of the Cecchetti method (Imperial Society of Teachers of Dancing -- ISTD, which differs sharply from the less-developed version taught by the Cecchetti Council of America. While Cecchetti has been the root of The National's training, most of the year was not developed to preparing for syllabus exams. Instead, The National developed its own system of training and used the ISTD Cecchetti exams at the end of the year to gage and assess its own students by inviting external ISTD examiners from England to examine its students. In the Upper School at The National, students were exposed to the Vaganova method by Russian and other Soviet teachers. Classical Spanish dance (namely Flamenco), Character Dance, and Modern Dance were included into the system of training to make well-rounded and versatile dancers. Students no longer prepare for the ISTD Cecchetti Exams, however those enrolled in the Teacher Training Program may do so, or elect to study Royal Academy of Dance or RAD syllabus, or the Vaganova method.

The National Ballet School also has an Associates Program for training of other students which is not affiliated with its academic boarding school. They teach Hip Hop, Jazz, and ballet. The current head of the Associates Program is Laurel Toto, a graduate of the Teacher Training Program.

In 2007, a major extension to the National Ballet School was completed and composed of three main structures, the Celia Franca Centre, which contains a curtain wall with the opening scene of the Nutcracker engraved into the glass panels, a “Bar” building, and a six storey “North Tower” building, which consist of three large studio spaces, each stacked on top of the other. The whole composition of the site weaves together beautifully since the school’s structure is able to incorporate the heritage buildings that surround it on Jarvis Street. The combination of these Victorian buildings with the contemporary architecture of the ballet school creates an interesting composition. The entire structure is composed of glass panels put together to create floor to ceiling windows, allowing the passers-by on Jarvis Street to get a glimpse of the art of ballet, and bringing the beauty of dance to the street.

The National Ballet School is located at 400 Jarvis Street in downtown Toronto, in the Wellesley-Church district. The building is composed of the Celia Franca Centre and an old heritage building called the Northfield house which is situated in the center of the school. The architectural firm, KPMB, concept was to express the tradition in ballet by using the old heritage building and express the innovation in ballet by using the new contemporary construction. The new building is composed of glass, steel, metal panels, and concrete blocks, and appears transparent from the street façade. The architects played with horizontal and vertical plane elements to create the building composition. Since the completion of the construction of the building in 2005, the building and the architects have won many prestigious awards, including the Governor’s General Award in 2006.[1]

The Celia Franca Centre was designed by Kuwabara Payne McKenna Blumberg Architects (KPMB). The construction of the National Ballet School expansion «Project Grand Jeté» began in 2003, and the Celia Franca Centre was completed in 2005.[2] The Celia Franca Centre is used for multiple purposes. Most importantly are the twelve dance studios of various sizes, some of which are facing Jarvis Street. These studios function as an open stage to the city.[3] The Franca Celia Centre also includes a coffee shop, library/ resource centre, study areas, and seating zones. Also, the Betty Oliphant Theatre has change rooms, dressing rooms and wardrobe all encompassed within the Franca Celia Centre.[4] The Façade of the Celia Franca Centre consists of glazed curtain walls married with cultured stone tiles tied by steel grate panel sub-structures. The choreography of the opening scene of The Nutcracker is visible in the suspended frit glass of the south pavilion facade in Benesh notation[5]

Canada's National Ballet School was founded in 1959 by two English dancers, Betty Oliphant and Celia Franca. As the school began to grow with its academic program and become a well established and prestigious ballet school, there was a need for an expansion. Thus Project Grand Jeté began as the School's expansion project with a $100 million budget. In 2007, the structure was finally completed and composed of three main structures, the Celia Franca Center which contains a curtain wall with the opening scene of the Nutcracker engraved into the glass panels, a “Bar” building, and a six storey “North Tower” building, which consist of three large studio spaces, each stacked on top of the other. The whole composition of the site weaves together beautifully since the school’s structure is able to incorporate the heritage buildings that surround it on Jarvis Street. The combination of these Victorian buildings with the contemporary architecture of the ballet school creates an interesting composition. This site is the perfect way of depicting Toronto’s architecture in a single structure by showing how all of Toronto consists of old and new architecture knitted together. The entire structure is composed of glass panels put together to create floor to ceiling windows, allowing the passersby on Jarvis Street to get a glimpse of the art of ballet, and bringing the beauty of dance to the street.