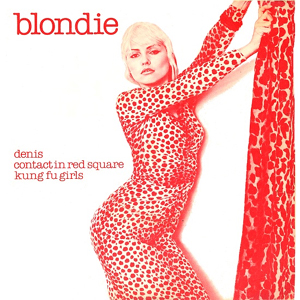 "Denis" a.k.a. "Denee Denee" is a song by American New Wave band Blondie. It featured on the band's second studio album, "" (1977), and was the second UK single release by Blondie on Chrysalis records. A gender-swapping cover of the 1963 hit "Denise" by , the song helped the band break into the international market. The original version of the song contained a verse with partly improvised lyrics in French by vocalist . Although Chrysalis insisted that the band re-record the song with a grammatically correct French translation, both the band and producer Richard Gottehrer preferred the first take. Harry stood her ground on the matter, and the version containing the "pidgin French" lyrics was released. The second, re-recorded version had its debut as a bonus track on UK's 1994 re-issue of "Plastic Letters".

"Denis" was released in February 1978 and reached number two in the UK and broke into the top twenty in most European countries. Just like "", the single was issued on both 7" and 12" formats in the UK, and both feature two B-sides, "Contact in Red Square" from "Plastic Letters" and "Kung-Fu Girls" from "Blondie". "Denis" was the only single released in the US from "Plastic Letters"—with "I'm on E" as the B-side—but never charted. In 1988, a remixed version of the track was issued as the lead single for Blondie/Debbie Harry remix compilation "".