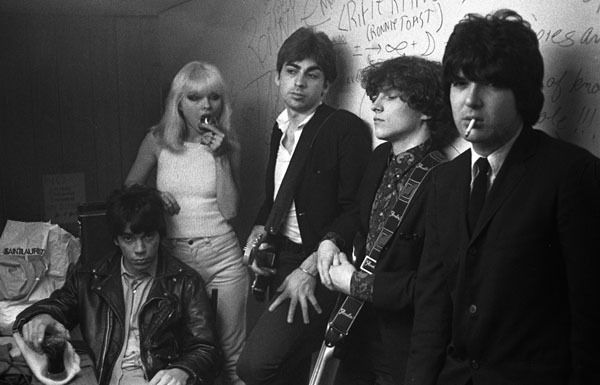 
Blondie is an American rock band that first gained fame in the late 1970s and has so far sold over 60 million records. [ [http://www.move-itproductions.com/baryshnikov/achillescollaborators.html MoveItproductions] ] The band was a pioneer in the early American new wave and scenes. Its first two albums contained strong elements of these genres, and although successful in the United Kingdom and Australia, Blondie was regarded as an underground band in the United States until the release of "" in 1978. Over the next three years, the band achieved several hit singles and was noted for its eclectic mix of musical styles incorporating elements of disco, pop and , while retaining a basic style as a new wave band.

Lead singer achieved a level of celebrity that eclipsed other band members, leading to tension within the group. Following a poorly received album and with core member diagnosed with a potentially fatal disease, the group disbanded in 1982. [cite web |url=http://www.mtv.com/news/articles/1426228/19980429/blondie.jhtml |title=Blondie Is Back |accessdate=2008-04-19 |date= 1998-04-29 |work=MTV.com] As members pursued other projects, Blondie's reputation grew over the following decade and the group reformed in 1997, achieving renewed success and a number one single in the United Kingdom with "Maria" in 1999. The group toured and performed throughout the world over the following years, and was inducted into both the and the RockWalk of Fame in 2006.

In the early 1970s, moved to and, inspired by the , aimed to join a similar band. He joined The Stilettos in 1973 as their and formed a romantic relationship with the band's vocalist, . A former waitress and , [cite news
title=Does Blondie Really Have More Fun?
author=Robert Camuto
publisher=Boulevards
date=February 1981
url=http://www.rip-her-to-shreds.com/archive_press_magazines_boulevardsfeb81.php
accessdate=2006-07-30] Harry had been a member of the folk-rock band, Wind in the Willows, in the late 1960s. In 1974, Stein parted ways with The Stilettos and Elda Gentile, the band's originator. Stein and Harry formed a new band with drummer Billy O'Connor and bassist Fred Smith. By 1975, Smith and O'Connor had left, and the line-up was Stein and Harry plus drummer , keyboard player and bass player Gary Valentine. Originally billed as Angel and the Snake [ [http://www.yomiuri.co.jp/dy/features/arts/20060902TDY16001.htm The Daily Yomiuri] . URL last accessed , .] the band renamed themselves Blondie in late 1975. The name was taken from comments from truck drivers who called "Hey, Blondie" to Harry as they drove by. [cite web |first= MacKenzie |last= Wilson | url =http://www.artistdirect.com/nad/music/artist/bio/0,,441681,00.html?artist=Debbie%252BHarry|title = Debbie Harry biography| work = | accessdate = 2006-07-24 ] Two members of the original lineup were sisters and (who is more commonly known as "Snooky"), who were both vocalists.

multi-listen item
filename =BlondieInTheFlesh.ogg
title = "In the Flesh" (1977)
description = Blondie achieved their first hit single with the ballad "In the Flesh", after it was played by mistake on an Australian television program. |multi-listen item
filename = BlondieRipHerToShreds.ogg
title = "Rip Her to Shreds" (1977)
description = Harry's aggressive vocals on this track are typical of the band's early style.|multi-listen item
filename = BlondieDenis.ogg
title = "Denis" (1977)
description = Blondie's first European hit added a danceable pop music beat to their established new wave sound.|Blondie became regulars at New York's Club 51, and . [ [http://shopformusic.microsoft.com/Shop/Artist.asp?locale=809&p_id=P+++++3703&name=Blondie Microsoft.com band information - Blondie] . URL last accessed , .] They got their first record deal with in the mid-1970s and released their debut album "Blondie" in 1976,

The band's first commercial success occurred in Australia in 1977, when the music television program "Countdown" mistakenly played their video "In the Flesh", which was the B-side of their current single "".

The single and album each reached the Australian top five in October 1977, and a subsequent double-A release of "X-Offender" and "Rip Her to Shreds" was also popular. A successful Australian tour followed in December, though it was marred by an incident in when disappointed fans almost rioted after Harry canceled a performance due to illness. [cite web | url =http://www.blondie.net/memorabilia.shtml | title = Wild Rock Scenes| work = Blondie.net (link to copy of Brisbane Telegraph front page, date 1977-12-09) | accessdate = 2006-07-24 ]

1977 also saw the release of their second album, recorded as a four-piece band because Gary Valentine had left. "" was promoted extensively throughout Europe and Asia by Chrysalis Records.

later described "Plastic Letters" as inferior to its predecessor, saying that with the exception of the two singles, it appeared to have been constructed from "leftovers" from the "Blondie" album. It noted that Gottehrer's production could not compensate for the "pedestrian musical tracks" or save the album from "general mediocrity". [cite web |first= William |last= Ruhlman | url =http://www.allmusic.com/cg/amg.dll?p=amg&token=&sql=10:3srb287c05ja | title = Plastic Letters review | work = Allmusic | accessdate = 2006-07-28 ]

multi-listen item
filename = BlondieHeartOfGlass.ogg
title = "Heart of Glass" (1978)
description = Although Blondie received some criticism for adopting a disco sound, "Heart of Glass" became their first U.S. hit.|multi-listen item
filename =BlondieOneWayOrAnother.ogg
title = "One Way or Another" (1979)
description = More typical of their new wave sound, this song was one of several Blondie songs dealing with the theme of obsessive love, and was a hit in the U.S. |multi-listen item
filename = BlondieCallMe.ogg
title = "Call Me" (1980)
description = The biggest hit of Blondie's career, "Call Me" was an early example of featuring a strong use of synthesisers.|multi-listen item
filename = BlondieRapture.ogg
title = "Rapture" (1980)
description = Harry's vocal performance included a lengthy rap, and was one of the earliest rap-influenced songs to achieve mainstream success in the U.S.|"", Blondie's third album, was produced by . Its first two singles were "Picture This" and "". "Heart of Glass" was their first U.S. hit. It was a reworking of a rock song that the group had performed since its formation, but updated with strong elements of music. Clem Burke later said the revamped version was inspired partly by and partly by the 's "", whose drum beat Burke tried to emulate. He and Stein gave Jimmy Destri much of the credit for the final result, noting that Destri's appreciation of technology had led him to introduce synthesizers and to rework the keyboard sections.

Blondie's next single in the U.S. was a more aggressive rock song, "", which reached the top 30. The band's greatest success continued to be in the UK, where an alternate single choice, "", became another number one smash.

Their fourth album, "", was well received by critics as a suitable follow-up to "Parallel Lines", but in the U.S. it failed to achieve the same level of success.

Deborah Harry worked with the Italian songwriter and producer , who had been responsible for 's biggest hits, and they composed the song "Call Me" for the soundtrack of the film "". The song spent six weeks at number one in the U.S. and became a hit throughout the world. Their album "" was released later that year and contained two more worldwide hits, the reggae-styled "" and the rap-flavored "Rapture", which was the first song containing elements of hip-hop and rap vocals to reach number one in the U.S. and helped introduce the then-underground rap genre to a larger audience. "Rapture" would be the band's only single to achieve a higher chart position on the U.S. charts than in the UK, where it peaked at number five.

Hiatus, "The Hunter", and breakup

Following their success of 1978-80, Blondie took a brief break in 1981. That year, Debbie Harry and Jimmy Destri both released solo albums; Stein helped out with Harry's album "", and Burke with Destri's "". Also in 1981, Blondie was offered the chance to perform the theme to the new James Bond film "For Your Eyes Only". They were under the impression that they had been asked to compose the track as well, but when they presented their song to the film's producers, they learned the offer was to record the theme already written by and Michael Leeson. The producers rejected Blondie's song and passed the offer on to , who had a top ten hit with the Conti/Leeson song. Blondie's composition for the film was, however, included on their next album.

The band reconvened in 1982 to record and release "The Hunter". In contrast to their earlier commercial and critical successes, "The Hunter" generally received lukewarm-to-negative reviews and failed to hit the top 20 in the U.S. The album did spin off two fairly minor hit singles: "Island of Lost Souls" (#11 UK, #37 US) and "War Child" (#39 UK).

With tensions within the band on the rise due to the commercial decline and the constant press focus on Harry to the exclusion of the other band members, events reached a breaking point when Stein was diagnosed with the life-threatening illness . In August 1982, Blondie canceled their tour plans early and announced their break-up.

Stein and Harry (at the time a couple) stayed together, and retreated from the public spotlight for a few years. After Stein recovered from his illness, Harry resumed her solo career in 1985, with active participation from Stein in all her recordings. Meanwhile, Burke became a much-in-demand session drummer (and played for a time with ), and Destri also maintained an active career as a producer and session musician.

multi-listen item
filename =BlondieMaria.ogg
title = "Maria" (1999)
description = "Maria" recalled Blondie's late 1970s new wave style and was a number one single in the UK |During the late 1980s and into the early 1990s, Blondie's past work was recognized by a new generation of fans and artists including Madonna

In 1996, Stein began the process of reuniting Blondie and contacted Burke, Destri, and Valentine, who had by this time moved to London and become a full-time writer under his real name ; his "New York Rocker: My Life in the Blank Generation" (2002) is a memoir of his years with the band. In 1997, the band reformed, performing live three times without Harrison and Infante, who had unsuccessfully sued to prevent the reunion under the name Blondie. An international tour in late 1998 and early 1999 [cite web | url =http://www.blondie.net/gig_list.shtml | title = Blondie gig list| accessdate = 2007-09-28 ] followed. A new album, "No Exit", was released in February 1999; it was described by Jimmy Destri as "15 songs about nothing".

The band released the album "" in October 2003. "Curse" was Blondie's least-successful album since its debut, although the single "" managed to reach number 12 on the UK charts. In 2004 Jimmy Destri retired from touring, leaving only Harry, Stein and Burke from the original lineup appearing at live shows. [ [http://www.blondie.net/blondie_jimmy_destri.shtml Jimmy Destri at Blondie.net] . URL last accessed , .]

By 1982, the year the band broke up, Blondie had released six studio albums, each exhibiting a stylistic progression from the last. The band is known not only for the striking stage persona and vocal performances of Harry but also for incorporating elements in their work from numerous subgenres of , reaching from their punk roots to embrace New Wave, , and hip hop.