The Postman
This article is about the 1985 novel. For the 1997 film, see The Postman (film). For other uses, see Postman (disambiguation). 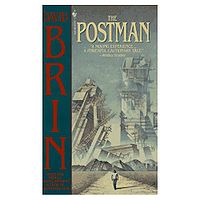 Cover of recent paperback edition of The Postman

The Postman (1985), is a post-apocalyptic science fiction novel by David Brin. A drifter stumbles across the uniform of an old United States Postal Service letter carrier and with empty promises of aid from the "Restored United States of America", gives hope to a community threatened by local warlords. The first two parts were published separately as "The Postman" (1982) and "Cyclops" (1984). Both were nominated for a Hugo Award for Best Novella. The completed novel was awarded first prize in the John W. Campbell Award's for the best science fiction novel of the year in 1986,[1] and won the Locus Award for Best Science Fiction Novel that same year.[1] It was also nominated for Hugo[1] and Nebula[2] awards for best novel.

In 1997, a film adaptation starring Kevin Costner was made of the novel.

Despite the post-apocalyptic scenario, and several action sequences, the book is largely about civilization and symbols. Each of the three sections deals with a different symbol.

The first is the Postman himself, Gordon Krantz, who takes the uniform solely for warmth after he loses everything but his sleeping clothes. He wanders without establishing himself anywhere, and acts in scenes of William Shakespeare for supplies. Originally from Minnesota, he has traveled as far West as Oregon. Taking shelter in a long-abandoned postal van, he finds a sack of mail and takes it to a nearby community to barter for food and shelter. His reputation as a real postman builds not because of a deliberate fraud (at least initially) but because people are desperate to believe.

Later, in the second section, he encounters a community (Corvallis, Oregon) led by Cyclops, apparently a sentient artificial intelligence created at Oregon State University which miraculously survived the cataclysm. In reality, however, the machine had ceased functioning during a battle; a group of scientists merely maintain the pretense of it working to try and keep hope, order, and knowledge alive.

Eventually, in the third section, as the Postman joins forces with the Cyclops scientists in a war against an influx of "hypersurvivalists", he begins to find that the hypersurvivalists are being pressed from the Rogue River area to the south as well. The hypersurvivalists are more commonly referred to as Holnists, after the founder of their ideal, Nathan Holn. Many times through the book, curses are uttered which damn Holn for his actions. Nathan Holn was an author who championed an extreme, violent, misogynistic and hypersurvivalist society. Holn is said to have himself been hanged in the novel, but in the time following what should have been a brief period of civil disorder, followers of Holn prevented the United States from recovering from the limited war, and the plagues that followed.

As the story ends, and he comes close to the hypersurvivalist's southern enemy, he begins to find traces of them, primarily in the symbol that they rally behind: the Bear Flag of California. The final scenes give the impression that the three symbols may rally together in an effort to revive civilization.

Another message of the plot deals with the backstory of the post-apocalyptic world: specifically, that it was not the electronics-destroying electromagnetic pulses, nor the destruction of major cities, nor the release of various bio-engineered plagues that actually destroyed society: rather, it was the hypersurvivalists themselves, those who maintained stockpiles of weapons and ammunition and who preyed on humanitarian workers and other forces of order.