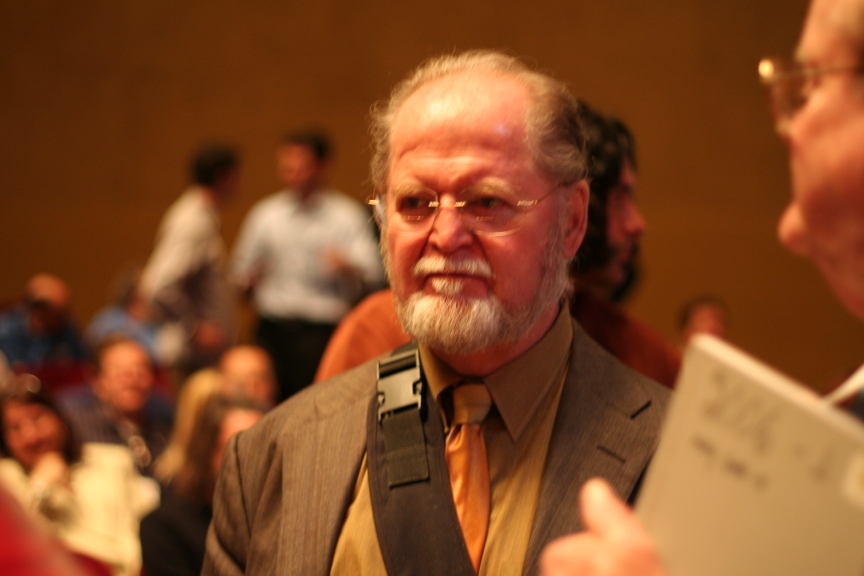 Laurence van Cott Niven (born , ) is a US . Perhaps his best-known work is "" (1970), which received Hugo, Locus, Ditmar, and Nebula awards. His work is primarily , using concepts and theoretical physics. It also often includes elements of and adventure stories. His includes "" series, rational fantasy dealing with magic as a non-renewable resource. Niven also writes humorous stories; one series is collected in "The Flight of the Horse".

Niven is a great-grandson of oil tycoon , an important figure in the scandal of the 1920s. He briefly attended the and graduated with a in (with a minor in ) from , , in 1962. He did a year of graduate work in mathematics at the . He has since lived in Los Angeles suburbs, including Chatsworth and Tarzana, as a full-time writer. He married Marilyn Joyce "Fuzzy Pink" Wisowaty, herself a well-known Science Fiction and Regency literature fan, on , .

Niven is the author of numerous science fiction short stories and novels, beginning with his 1964 story "The Coldest Place". In this story, the coldest place concerned is the dark side of Mercury, which at the time the story was written was thought to be tidally locked with the (it was found to rotate in a 2:3 resonance just months before the story was published).

Niven has written scripts for various science fiction television shows, including the original "Land of the Lost" series and "", for which he adapted his early story "." He adapted his story "" for an episode of the television series "" in 1996.

He has also written for the character including in his stories concepts such as universal and the effect, which are unusual in s. The "Bible" for Green Lantern was written by Niven.

Many of Niven's stories take place in his universe, in which humanity shares the several habitable solar systems nearest to the with over a dozen alien species, including aggressive feline ti and very intelligent but cowardly s, which are frequently central characters. The "" series is set in the Known Space universe.

The creation of thoroughly worked-out alien species, which are very different from humans both physically and mentally, is recognized as one of Niven's main strengths. However, the criticism has been made that once the basic characteristics of Niven's alien species have been defined, all subsequent actions by members of that species seem predictable and predeterminedFact|date=April 2007, giving them a kind of "pre-programmed" character lacking and excusing ruthless actions on their part (for example, the committing of genocide by a ).

"" series of short stories take place in a more whimsical science fiction universe, told from the point of view of the proprietor of a multi-species bar.

Much of his writing since 1970s has been in collaboration with and/or .

Niven's most famous contribution to the SF genre is his concept of the , a rotating band around a star of approximately the same diameter as Earth's orbit. The idea's genesis came from Niven's attempts to imagine a more efficient version of a , which could produce the illusion of surface gravity through rotation. Given that spinning a Dyson Sphere would result in the atmosphere pooling around the equator, the Ringworld removes all the extraneous parts of the structure, leaving a spinning band landscaped on the sun-facing side, with the atmosphere and inhabitants kept in place through and 1000 mile high perimeter walls (s). When it was pointed out to Niven that the Ringworld was dynamically unstable, in that once the center of rotation drifted away from the central sun, gravity would pull the ring into contact with the star, he used this as a plot element in the sequel novel, .

This idea proved influential, serving as an alternative to a full Dyson Sphere that required fewer assumptions (such as artificial gravity) and allowed a day/night cycle to be introduced (through the use of a smaller ring of "shadow squares", rotating between the ring and its sun). This was further developed by Iain M. Banks in his "Culture" series, which features about 1/100th ringworld–size s called Orbitals that orbit a star rather than encircling it entirely. also uses ringworlds in his 2008 novel "". The Ringworld-like namesake of the "Halo" video game series is the ous Halo megastructure/superweapon. It is one of the most visible influences of the Ringworld concept on popular culture.

A thinly disguised Niven appears as the character "Lawrence Van Cott" in 's novel ""Fact|date=July 2007. A part of the computer game "" takes place in the "Niven Sector" (it is believed that the , the feline alien enemy in the "Wing Commander" series, were based on Niven's ).

One "" card is named "Nevinyrral's Disk", i. e. "Larry Niven" backwards. When activated, it destroys all creatures, enchantments, and artifact cards in play, including itself. This is a reference to the "Warlock's Wheel" from series, which drains all magic from a region by using up the "mana" with an open-ended enchantment. In addition, the game "" has an artificial intelligence named Nevinyrral and the game "" often gives one of its planets the name Nevinyrral in its randomly generated galaxies.

Similarly, the computer game series "Halo" is set on ringworld-like s, although the Halo is mere ten thousands of km large.

In 2007, Niven, in conjunction with a group of science fiction writers known as SIGMA, led by Pournelle, began advising the U.S. as to future trends affecting terror policy and other topics. [cite news | first=Mimi | last=Hall | title=Sci-fi writers join war on terror | date= | url=http://www.usatoday.com/tech/science/2007-05-29-deviant-thinkers-security_N.htm | work=USA Today | accessdate=2008-04-30] In March 2008 at a DHS science and technology conference, Niven suggested that "a good way to help hospitals stem financial losses is to spread rumors in Spanish within the Latino community that emergency rooms are killing patients in order to harvest their organs for transplants....The problem [of hospitals going broke] is hugely exaggerated by illegal aliens who aren’t going to pay for anything anyway".Fact|date=October 2008

One of Niven's most humorous works is "", in which he uses real-world physics to underline the difficulties of and a human woman ( or ) mating.

Larry Niven's novels frequently make use of the concept, which he also popularized.

In several titles and elsewhere Niven employs terms that are in that they are apparently metaphorical, but are in fact, meant to be taken literally, or sometimes vice versa. A few examples of this are:

* The novel "" is in fact about a road on a planet called Destiny.
* In the ""'s past there was an event known as "The Fall of the Cities", in which floating cities literally fell out of the sky and crashed to the ground.
* In his short story, "At The Core," his albino hero begins a trip to the Galactic core, but eventually has to turn back because the galactic center is in fact exploding, and sending a deadly wave of hard radiation before it, which prompts some ruminations on cowardice, and yields the revelation at the end of story that the phrase in the title had been meant metaphorically after all.
* The short story "There is a Tide" begins by speaking of a metaphorical tide of fate which guides one's destiny. But the existence of literal on a planet in the story is a key to the plot.
* The novel "" features long straight floating trees which are curved at each end in opposite directions, giving them the shape of the mathematical sign, but are themselves integral to the lifecycle of the inhabitants.
* The novel "" at first seems to refer to the elephantine "Fithp" invaders striding across the Earth, but is actually revealed to be the aliens dropping an asteroid nicknamed the Foot onto the Earth.

Larry Niven is also known in for "Niven's Law": "There is no cause so right that one cannot find a fool following it". Over the course of his career Niven has added to this first law a list of which he describes as "how the Universe works" as far as he can tell.