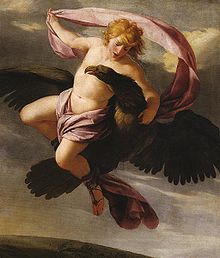 The Abduction of Ganymede (ca. 1650), by Eustache Le Sueur

In Greek mythology, Ganymede (Greek: Γανυμήδης, Ganymēdēs) is a divine hero whose homeland was Troy. Homer describes Ganymede as the most beautiful of mortals. In the best-known myth, he is abducted by Zeus, in the form of an eagle, to serve as cup-bearer in Olympus. Some interpretations of the myth treat it as an allegory of the human soul aspiring to immortality. It also served as a model for the Greek social custom of paiderasteia, the relationship between a man and a youth. The Latin form of the name was Catamitus, from which the English word "catamite" derives.[1]

Ganymede was the son of Tros of Dardania, from whose name "Troy" was supposed to derive, and of Callirrhoe. His brothers were Ilus and Assaracus.

Ganymede was abducted by Zeus from Mount Ida, near Troy in Phrygia.[2] Ganymede had been tending sheep, a rustic or humble pursuit characteristic of a hero's boyhood before his privileged status is revealed. Zeus either sent an eagle or turned himself to an eagle to transport the youth to Mount Olympus. 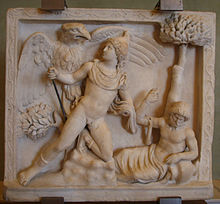 In the Iliad, Zeus is said to have compensated Ganymede's father Tros by the gift of fine horses, "the same that carry the immortals",[3] delivered by the messenger god Hermes. Tros was consoled that his son was now immortal and would be the cupbearer for the gods, a position of much distinction. Walter Burkert found a precedent for the Ganymede myth on an Akkadian seal that depicts the hero-king Etana riding heavenwards on an eagle.[4]

In Olympus, Zeus granted him eternal youth and immortality and the office of cupbearer to the gods, supplanting Hebe. Edmund Veckenstedt associated Ganymede with the genesis of the intoxicating drink mead, which had a traditional origin in Phrygia.[5] All the gods were filled with joy to see the youth, except for Hera, Zeus's consort, who regarded Ganymede as a rival for her husband's affection. Zeus later put Ganymede in the sky as the constellation Aquarius, which is associated with that of the Eagle (Aquila). A moon of Jupiter, the planet named for Zeus's Roman counterpart, was named Ganymede by modern-era astronomers.

Ganymede was afterwards also regarded as the Genius of the fountains of the Nile, the life-giving and fertilizing river. Thus the divinity that distributed drink to the gods in heaven became the genius who presided over the due supply of water on earth.[citation needed] 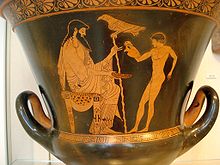 Plato accounts for the pederastic aspect of the myth by attributing its origin to Crete, where the social custom of paiderasteia was supposed to have originated (see "Cretan pederasty").[6] He has Socrates deny that Ganymede was the "catamite" of Zeus, and say the god loved him non-sexually for his psychē, "mind" or "soul," giving the etymology of his name as ganu-, "taking pleasure," and mēd-, "mind." Ganymede, he points out, was the only one of Zeus's lovers who was granted immortality.[7]

In poetry, Ganymede became a symbol for the beautiful young male who attracted homosexual desire and love. He is not always portrayed as acquiescent: in the Argonautica of Apollonius of Rhodes, Ganymede is furious at the god Eros for having cheated him at the game of chance played with knucklebones, and Aphrodite scolds her son for "cheating a beginner." The Augustan poet Virgil portrays the abduction with pathos: the boy's aged tutors try in vain to draw him back to earth, and his hounds bay uselessly at the sky.[8] The loyal hounds left calling after their abducted master is a frequent motif in visual depictions, and is referenced also by Statius:

Here the Phrygian hunter is borne aloft on tawny wings, Gargara’s range sinks downwards as he rises, and Troy grows dim beneath him; sadly stand his comrades; vainly the hounds weary their throats with barking, pursue his shadow or bay at the clouds."[9] 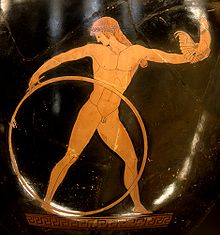 Ganymede rolling a hoop and bearing aloft a cockerel, a love-gift[10] from Zeus, who is pictured in pursuit on the obverse of a vase by the Berlin Painter (Attic red-figure krater, 500–490 BC)

One of the earliest depictions of Ganymede is a red-figure krater by the Berlin Painter in the Musée du Louvre. Zeus pursues Ganymede on one side, while on the other side the youth runs away, rolling along a hoop while holding aloft a crowing cock. In fifth-century Athens, vase-painters often depicted the mythological story, which was so suited to the all-male symposium or formal banquet. The Ganymede myth was treated in recognizable contemporary terms, illustrated with common behavior of homoerotic courtship rituals, as on a vase by the "Achilles Painter" where Ganymede also flees with a cock. Ganymede is usually depicted as a well-developed, muscular young man. Leochares (about 350 BCE), a Greek sculptor of Athens who was engaged with Scopas on the Mausoleum at Halicarnassus cast a (lost) bronze group of Ganymede and the Eagle, a work that was held remarkable for its ingenious composition, which boldly ventured to the verge of what is allowed by the laws of sculpture, and also for its charming treatment of the youthful form as it soars into the air. It is apparently imitated in a well-known marble group in the Vatican, half life-size. Such Hellenistic gravity-defying feats were influential in the sculpture of the Baroque.

In Shakespeare's As You Like It (1599), a comedy of mistaken identity in the magical setting of the Forest of Arden, Celia, dressed as a shepherdess, becomes "Aliena" (Latin "stranger", Ganymede's sister) and Rosalind, because she is "more than common tall", dresses up as a boy, Ganymede, a well-known image to the audience. She plays on her ambiguous charm to seduce Orlando, but also (involuntarily) the shepherdess Phebe. Thus behind the conventions of Elizabethan theater in its original setting, the young boy playing the girl Rosalind dresses up as a boy and is then courted by another boy playing Phebe. 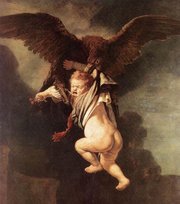 When painter-architect Baldassare Peruzzi included a panel of The Rape of Ganymede in a ceiling at the Villa Farnesina, Rome, (ca 1509-1514), Ganymede's long blond hair and girlish pose make him identifiable at first glance, though he grasps the eagle's wing without resistance. In Antonio Allegri Correggio's Ganymede Abducted by the Eagle (Vienna) Ganymede's grasp is more intimate. Rubens' version portrays a young man. But when Rembrandt painted the Rape of Ganymede or a Calvinist Dutch patron in 1635, the usual Classical erotic overtones were missing: a dark eagle carries aloft a plump cherubic baby (Paintings Gallery, Dresden), one who is bawling and urinating in fright.

Examples of Ganymede in 18th century France have been studied by Michael Preston Worley.[11] The image of Ganymede was invariably that of a naive adolescent accompanied by an eagle and the homoerotic aspects of the legend were rarely dealt with. In fact, the story was often "heterosexualized." Moreover, the neoplatonic interpretation of the myth, so common in the Italian Renaissance, in which the rape of Ganymede represented the ascent to spiritual perfection, seemed to be of no interest to Enlightenment philosophers and mythographers. Jean-Baptiste Marie Pierre, Charles-Joseph Natoire, Guillaume II Coustou, Pierre Julien, Jean-Baptiste Regnault and others contributed images of Ganymede to French art during this period. 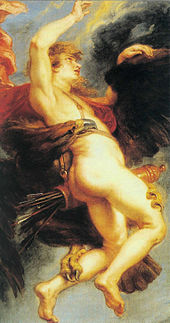 The Rape of Ganymede, by Rubens

My first thought, my first flash was that it was a beautiful woman.... The angel was beautiful, with a face dominated by immense, lustrous green eyes and framed by golden ringlets, and with a bow mouth and full lips and brilliant white teeth.
And only then, only after I had felt that first rush of improbable carnal lust, did it occur to me that this angel was a man.[14] 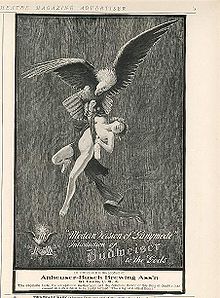 “'Modern Version of Ganymede' Introduction of Budweiser to the Gods": ad in Theatre Magazine, February 1906

Ganymede is named by various ancient Greek and Roman authors: