Nonnus of Panopolis (Greek Νόννος), was a Greek epic poet. He was a native of Panopolis (Akhmim) in the Egyptian Thebaid, and probably lived at the end of the 4th or early 5th century. He is known as the composer of the Dionysiaca, an epic tale of the god Dionysus, and the Metabole, a paraphrase of the Gospel of John. 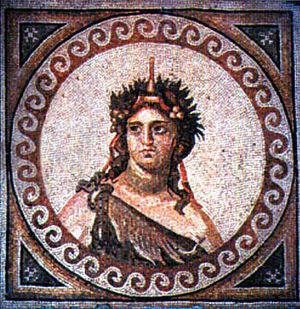 A mosaic of Dionysus from Antioch.

There is almost no evidence for the life of Nonnus. It is known that he was a native of Panopolis (Akhmim) in Upper Egypt, by his naming in manuscripts.[1] Scholars have generally dated him from the end of the 4th to the early part of the 5th century CE. He must have lived after a poem of Claudian's which he appears to be familiar with (after 394-397CE) but before Agathias Scholasticus' reference to him as a "recent author." (before 530-580CE)[2] He is known chiefly for his 48-book poem the Dionysiaca, the longest surviving poem in Greek from antiquity (it is only 7,000 lines shorter than the Iliad and Odyssey combined). A poetic paraphrase of the Gospel of John, the Metabole is attributed to him as well, which is thought by certain verbal echoes to have been composed after the Dionysiaca.[3] At least two other works by Nonnus are lost. Only four lines of the Bassarica (also on the subject of Dionysus) have been preserved in a commentary by Stephanus of Byzantium, and according to an epigram in the Palatine Anthology (9.198), Nonnus was the author of a work titled the Battle of the Giants.

Nonnus' principal work is the Dionysiaca, an epic in 48 books, the longest surviving poem from antiquity at 20,426 lines, composed in Homeric dialect and dactylic hexameters, the main subject of which is the life of Dionysus, his expedition to India, and his triumphant return to the west. The poem is thought to have been written in the early 5th century.

Also surviving is his paraphrase of the Gospel of John, which is chiefly interesting as an indication of Nonnus' apparent conversion to Christianity in his later years. The style is not inferior to that of his epic. A team of Italian scholars are currently producing a full commentary of the poem, book by book, of which several parts have already been published. They have shown that Nonnus was as learned in Christian theology as in pagan myth. That a learned Christian poem and a synthesis of Greek myths could come from the same pen continues to intrigue. The suggestion that he wrote the Christian poem late in life, after conversion to Christianity, is less attractive than a recognition of the symbiosis between pagan and Christian culture in the late antique world.

On the sources, see