Over There (TV series)

Over There (TV series)

Over There is an action / drama / war television series that aired on FX. It premiered in the United States on July 27, 2005 and premiered in Canada on September 6, 2005 on the History Television channel. The series was presented in 16:9 widescreen format in the U.S. and UK, and mastered in high definition.

The series followed a unit of the United States Army's Third Infantry Division on its first tour of duty in Iraq, and chronicled the war's effects on the soldiers' families in the United States. The Iraq sequences were filmed in the California desert, while the homefront scenes are shot in and around the Greater Los Angeles area.

The pilot was developed by Steven Bochco (who also created such acclaimed series as NYPD Blue, L.A. Law, and Hill Street Blues). Originally, the show was to be produced by UPN, who subsequently decided that the prospects for international sales were not good and withdrew from the project. The series is, however, (according to Reuters) seen around the world on pay cable channels in about 100 territories.

The title of the series echoes "Over There," George M. Cohan's 1917 song about U.S. soldiers serving abroad during World War I. The show (Bochco's first for basic cable) was the first scripted television series set in a current, ongoing military action involving the United States. In another unusual move, the pilot episode was released on DVD on August 2, 2005, less than a week after the show's premiere.

FX formally announced on November 1, 2005 that the show would not be returning due to declining ratings. The 13th and last episode of the series, "Follow the Money," first aired in the U.S. on October 26, 2005.

The complete series was released on DVD in the United States and Canada on March 21, 2006.

The theme used for the series is Chris Gerolmo's 'Over There'.

The show's critics complained that the show "bends over backward not to express any opinion whatsoever about the conflict." Also, given the show's subject matter, it is not surprising that some criticized it as one of the most graphically–violent television programs ever. Accordingly, the program was tagged with the television rating TV-MA for language and violence, and warning notices such as "VIEWER DISCRETION ADVISED." FX advertised the show as being "...TV's most controversial series". 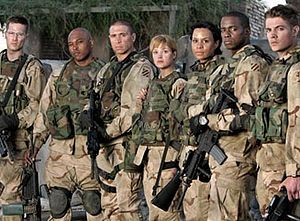