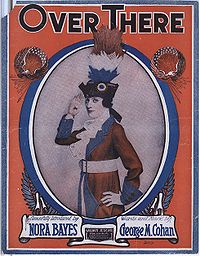 "Over There" is a 1917 song popular with United States soldiers in both world wars. It was written by George M. Cohan during World War I. Notable early recordings include versions by Nora Bayes, Enrico Caruso, Billy Murray, and Charles King.

According to Michael Duffy of FirstWorldWar.com, "Cohan later recalled that the words and music to the song came to him while travelling by train from New Rochelle to New York shortly after the U.S. had declared war against Germany in April 1917."[1]

This song, as well as "It's a Long Way to Tipperary", were popular patriotic songs during the First World War. On June 29, 1936, President Franklin D. Roosevelt awarded Cohan the Congressional Gold Medal for this and other songs.

It has been revived on various occasions also after WWII. As the "over there" is not named, the words can serve as an exhortation for any sending of American troops to a foreign military intervention.

The most famous of many film appearances is in Yankee Doodle Dandy starring James Cagney in his Oscar-winning performance. In that otherwise Hollywoodized film, this song was used effectively as an illustration of the creative process. The way the film portrays it, Cohan is watching a military band parade by, and a segment of one of their songs catches his ear, a simple triad that he finds himself whistling. Late at night, he is seen slowly working out the complete new song on a piano, note by note. The next scene unveils the song, as Cohan (Cagney) and woman dressed in uniform (Frances Langford, portraying Nora Bayes) sing it to a large and appreciative audience. The song is reprised at the very end of the film. As Cohan is leaving the White House grounds, a group of soldiers march past the now-aged Cohan, singing the song. Another bystander, also elderly, does a startled take as he finds himself standing next to the author of that song. Cohan (along with other citizens) begins to march alongside and in step with the soldiers. One of them (character actor Frank Faylen), not knowing who the old man is, teases him into joining the singing. The film irises-out on a closeup of Cohan (Cagney) singing the final line of the song's chorus.

The chorus of the song is used to herald the arrival of American troops on the pier which serves as the symbolic setting in the 1969 film Oh! What a Lovely War, with a line of lyrics changed to "We won't come back, we'll be buried over there". Other films using the tune include Leatherheads (2008), in the background in an early scene of The Cardinal, and briefly sung in 1941 (film).

A version by British musical group The Babe Team, produced a pop single based on the chorus of the song for the 2002 FIFA World Cup Finals.

The chorus of the song was used in a 2009 campaign for the U.S. men's national soccer team leading into the 2010 FIFA World Cup Finals held in South Africa.

The song appears in the 5th season of The Golden Girls, as the lullaby Rose's mom sang when she was a child. The Song is heard in the Tom and Jerry episode The Yankee Doodle Mouse.

Grampa Simpson sings the song while babysitting Bart Simpson and Lisa Simpson in The War of the Simpsons from The Simpsons (season 2).

The song's chorus is heard over the credits to "The Arrangements," Episode 4, Season 3, of Mad Men.

The Song can be heard in the background of one of the final scenes of "Broadway Limited", Episode 3, Season 1, of Boardwalk Empire.

The song's melody is used (with different lyrics) in a TV and radio advertising campaign for British comparison website Go Compare.

The song´s beginning is used in the last scene of "No Brains Left Behind", Season 4, Episode 9, of Boston Legal.

"The Yanks are Coming", title of an episode (Series 3, Episode 25) in the popular BBC science fiction sitcom Goodnight Sweetheart, is derived from the above.

The title of John A. Lee's 1943 book "The Yanks are Coming" is derived from the above song.

"The Yanks Are Not Coming"

After the Soviet Union signed the Molotov-Ribbentrop Pact with Nazi Germany on August 24, 1939, the Communist Party of the United States - like other Communist parties around the world - took an anti-war line, declaring the Second World War to be "an imperialist war" and strongly opposing US involvement in it. This was manifested, among other things, in widespread use of the slogan "The Yanks Are Not Coming", in direct opposition to the words of the above song.

However, after Adolf Hitler broke the Molotov-Ribbentrop Pact by attacking the Soviet Union on June 22, 1941, the CPUSA changed its position again, taking a strong position in favor of US entering the war (manifested in revival of the original WWI song).