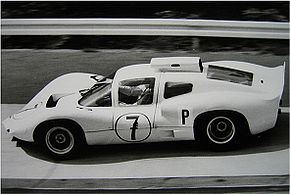 Joakim Bonnier 1966 in the Chaparral 2D
during practice at the Nürburgring. 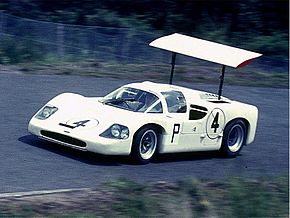 Mike Spence 1967 in the Chaparral 2F
during practice at the Nürburgring.

Chaparral Cars was a United States automobile racing team which built prototype race cars from the 1960s through the early 1970s. Chaparral was founded in 1962 by Hap Sharp and Jim Hall, a Texas oil magnate with an impressive combination of skills in engineering and race car driving. The name "Chaparral" was formed from the last names of the two founders. Throughout the 1960s and 1970s, Chaparral's distinctive race cars experienced strong success in both American and European racing circuits. Despite winning the Indianapolis 500 in 1980, the Chaparrals left motor racing in 1982. Chaparral cars also featured in the SCCA/CASC Can-Am series and in the European Fédération Internationale de l'Automobile (FIA) Group 7.

Chaparral was the first to introduce effectively designed air dams and spoilers ranging from the tabs attached to the earliest 2 model to the driver-controlled high wing "flipper" on the astoundingly different looking 2E, all the way through to Hall's most idealistically inspired creation, the 2J, the car that would forever be known as the "vacuum cleaner", and was the forerunner of modern "ground-effects" cars. The use by Jim Hall of a semi-automatic transmission in the Chaparral created flexibility in the use of adjustable aerodynamic devices.

The development of the Chaparral chronicles the key changes in race cars in the 1960s and 1970s in both aerodynamics and tires. Jim Hall's training as an engineer taught him to approach problems in a methodical manner and his access to the engineering team at Chevrolet as well as at Firestone changed aerodynamics and race car handling from an art to empirical science. The embryonic data acquisition systems created by the GM research and development group aided these efforts. An interview with Jim Hall by Paul Haney illustrates many of these developments.[1] Canadian Automobile Sport Clubs

1957. Jim Hall raced it successfully through 1961, 1962 and 1963 while he created the design for Chaparral 2. As it was not a design owned by Jim Hall, other cars were sold to cut costs. It was the only Chaparral to be raced by someone other than Chaparral cars.

The Chaparral 2-Series was designed and built to compete in the United States Road Racing Championship and other sports car races of the time, particularly the West Coast Series that were held each fall. Following the lead of innovators like Bill Sadler from Canada and Colin Chapman who introduced rear engined cars to Formula 1 in Europe (where Jim Hall had raced in Formula 1), its basic design concept was a rear-engined car.

First raced in 1963, it was developed into the dominant car in the series in 1964 and 1965. Designed for the 200 mile races of the sports car series, it was almost impossible to beat. It proved that in 1965 by winning the 12 Hours of Sebring on one of the roughest tracks in North America.

As the car was being developed, Jim Hall took the opportunity to implement his theories on aerodynamic force and rear wheel weight bias.

In addition, the Chaparral 2-Series featured the innovative use of fiberglass as a structural element. Hall also developed 2-Series cars with conventional aluminum chassis.

It is very difficult to identify all iterations of the car as new ideas were being tested continually. There are three generally accepted variants:

Coincidental with the development of aerodynamics was Hall's development of race tires. Jim Hall owned Rattlesnake Raceway adjacent to his race shop; that proximity allowed him to participate in much of Firestone's race tire development.

A two-article series in Car and Driver magazine featured Jim Hall's design theories. The article turns speculation about vehicle handling into applied physics. It was the precursor to the elaborate data collection and management of current racing teams. Hall's methodology was probably the first documented approach to measuring and managing the properties of race cars.

The 2D was a closed cockpit variant of the 2 series (which were all open cockpit designs), designed for endurance racing in 1966. It won at 1000 km Nürburgring in 1966 with Phil Hill and Joakim Bonnier driving. It also competed in the 1966 24 Hours of Le Mans, withdrawing after 111 laps.

The 2E was based on the Chevrolet designed aluminum 2C chassis and presented Jim Hall's most advanced aerodynamic theories to the racing world in the 1966 inaugural Can-Am championship. The 2E established the paradigm for virtually all racing cars built since.[2] It startling in appearance, with its radiators moved from the traditional location in the nose to two ducted pods on either side of the cockpit and a large wing mounted several feet above the rear of the car on struts. The wing was the opposite of an aircraft wing in that it generated down-force instead of lift and was attached directly to the rear hubs, loading the tires, for extra adhesion while cornering. A ducted nose channeled air from the front of the car up, creating extra down-force as well. By depressing a pedal that was in the position of the clutch pedal on a car with a manual transmission, Hall was able to feather, or flatten out, the negative angle of the wing when down-force was not needed, such as on a straight section of the track, to reduce drag and increase top speed. In addition, an interconnected air dam closed off the nose ducting for streamlining as well. When the pedal was released, the front ducting and wing returned to their full down-force position. It was a brilliant design. Within two years every sports racing car, as well as Formula One car, had wings on tall struts, although many were not as well designed as Hall's. The resulting accidents from their failures caused movable wings (as movable aerodynamic devices) to be outlawed after the 1967 season by the FIA, which sanctioned most professional road racing.

The 2E scored only one win in Laguna Seca with Phil Hill driving, but the reason for this may have been the larger engines the other competitors were using. Hall stuck to an aluminum 5.3 liter Chevrolet engine in his lightweight racer, while the other teams were using 6 and sometimes 7 liter iron engines, trading weight for power.

The 2E was a crowd favorite and remains Jim Hall's favorite car.

Hall applied the aerodynamic advances of the aluminum 2E to the older fiberglass chassis closed-cockpit 2D for the 1967 racing season. A movable wing, on struts, loaded the rear tires while an air dam in the front released pressure to keep the suspension from compressing at high speeds, and the radiators were moved to positions next to the cockpit. An aluminum 7 litre Chevrolet engine replaced the 5.3 litre engine of the 2D. While always extremely fast, the extra power of the larger engine was too much for the automatic transmission to handle and it broke with regularity. When a solution was finally found to the transmission problems, the 2F scored its only win on 30 July 1967 in the BOAC 500 at Brands Hatch with Phil Hill and Mike Spence driving. After this race, the FIA changed its rules, outlawing not only the 2F but the Ford Gt Mark 4 (winner at LeMans) and the Ferrari P4 (winner at Daytona, 2nd at LeMans) as well.

As with the 2D, the 2F raced wearing Texas license plates.

The 1967 2G was a development of the 2E. It featured wider tires, and a 427 aluminum Chevrolet engine. While on par with his competitors in terms of power, the lightweight 2C chassis was stretched to the limit and it was only Hall's driving skill that kept the car competitive. For the 1968 Can-Am series, still larger tires were added when the 2H was not ready to race.

Jim Hall's racing career was effectively ended in a severe crash at the Stardust Grand Prix, although he did drive in the 1970 Trans-Am Series while fielding a team of Chaparral Camaros.

Never one to be complacent, Jim Hall noted that the increasing down-force also created enormous drag. Seeking a competitive edge, the 2H was built in 1969 as the replacement for the 2G to minimize drag, rather than maximize down-force. However, the anticipated gains in speed were more than offset by the reduced cornering speeds and the car was consistently slower than anticipated.

Generally deemed a failure, it eventually was fitted with a huge wing. 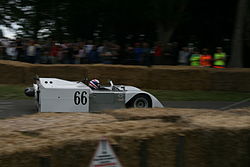 The Chaparral 2J at the Goodwood Festival of Speed.

The most unusual Chaparral was the 2J. In addition to a powerful 700 hp engine, and a three-speed semi automatic transmission, the back of the 2J housed two 17-inch fans driven by a single 45 hp snowmobile engine. The Can-Am Series had no engine size limit, so the snowmobile engine wasn't affected by an engine displacement maximum. The purpose of the fans was to evacuate air from under the car to provide down-force. This gave the car tremendous gripping power and enabled greater maneuverability at all speeds, which cannot be achieved by simpler aerodynamic devices, such as diffusers and wings. Since it created the same levels of low pressure under the car at all speeds, down-force did not decrease at lower speeds. With other aerodynamic devices, down-force decreases as the car slows down or achieves too much of a slip angle, both of which were not problems for the "sucker car". It also had ground effect Lexan plastic skirts to keep air from leaking in, a technology that would appear in Formula One several years later.

The 2J competed in the Can-Am series and often qualified at least 2 seconds quicker than the next fastest car, but was not a success, because it was plagued with mechanical problems. It ran for only one racing season, in 1970, after which it was outlawed by the Sports Car Club of America (SCCA), even though it was approved by the SCCA prior to the car's first race. The SCCA succumbed to pressure from other teams, McLaren in particular, who argued that the fans constituted "movable aerodynamic devices", outlawed by the international sanctioning body FIA, a rule first applied against the 2E's adjustable wing. There were also complaints from other drivers saying that whenever they drove behind it the fans would throw stones at their cars. McLaren argued that if the 2J were not outlawed, it would likely kill the Can-Am series by totally dominating it — ironically, something McLaren had been doing for years.[3] A similar suction fan was used in Formula 1 eight years later for the 1978 Swedish Grand Prix, by the Brabham BT46B, but was banned soon after. It was ruled that the fans were considered movable aerodynamic devices and thus both 2J and the BT46B were outlawed under the same rule that outlawed movable wings years earlier. 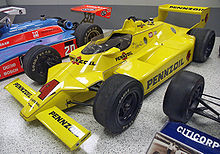 Chaparral 2K on display in the Indianapolis Motor Speedway Hall of Fame Museum.

The 2K was a Formula One-inspired ground effect Indy car designed by Briton John Barnard. Debuting in 1979 with driver Al Unser Sr., it went on to win six races in 27 starts over three seasons. Its greatest success came in 1980, when Johnny Rutherford drove it to victory in both the Indy 500 and PPG Indy Car World Series championship.

In 2005, a wing of the Permian Basin Petroleum Museum in Midland, Texas was dedicated to the permanent display of the remaining Chaparral cars and the history of their development by Midland native Jim Hall.