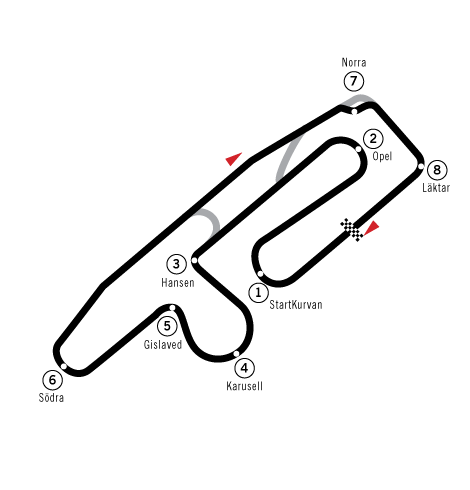 The 1978 Swedish GP will be remembered for just one thing: the race itself being rather uneventful, it was the winning car that created its own footnote in history by dominating the meeting, thus to great lengths contributing to its uneventfulness in the first place.

Responsible for this overwhelming coup was some clever thinking by 's , who was trying to eclipse 's ground effect invention on the , the skirted car that had swept the front row since its debut at . Center of the new Brabham BT46B concept was a large fan which drew air through the engine water radiator which was mounted horizontally over the engine. The fan also took ground effect to a higher level (at least engineering-wise) by sucking air from under the car, creating a partial and creating an enormous amount of . The car appeared to contravene a rule which stated that moving aerodynamic devices were not allowed, but Brabham argued that the rules had been worded to ban devices whose "primary" function was aerodynamic. As the fan also cooled the engine, Brabham claimed that this, not aerodynamics, was its primary function.

Its legality was soon protested, but it was allowed to race, and John Watson qualifying 2nd and 3rd behind the Lotus 79 of (the two drivers did this as to not draw attention to the remarkable advantage that the fan would provide).

At the start Andretti retained the first place, while Lauda got ahead of Watson; on the second lap he was passed by a fast in the , and on the third he was passed by the other Lotus of too; the Swede also passed Patrese, but had later to back off due to a tyre puncture. The order then remained the same until lap 20, when Watson was forced to retire by a throttle problem.

At the front, Lauda and Andretti were battling for first place, until the American made an error and was forced to let the Austrian through, and eventually dropped out due to a broken valve on his engine. Once a back-marker dropped oil onto the track, the Brabham was in a race of its own, seemingly unaffected by the slippery surface. In Lauda's biography, To Hell And Back, he wrote that whilst other cars had to reduce speed to drive carefully over the oil, the Brabhams could simply accelerate (as the fan was activated by the gearbox to get around regulations, this meant that higher speed produced much higher grip) through the affected parts of the track. Lauda went on to win by 34.6 seconds, followed by Patrese and Peterson in a close finish; the remaining points went to , and .

After the race, the stewards deemed the car legal. Later, the FIA investigated the car, and corroborated Brabham's claim that the fan's primary effect was to cool the car, meeting the letter, if not the spirit, of the rules. The car was judged to have been legal as raced and the Brabham victory stood, but the Brabham 'fan car' never raced again. It is popularly thought that it was banned, but it was actually voluntarily withdrawn by Brabham. This was arguably done by team owner Bernie Ecclestone to avoid a conflict with the other privately owned teams whose support he needed. 1978 was the year that Ecclestone became chief executive of FOCA and led it through the that would lead to the downfall of FISA and give FOCA the right to negotiate television contracts for the Grands Prix, effectively giving Ecclestone commercial control of Formula 1 which continues to this day.