Osmosis is the movement of solvent molecules through a selectively permeable membrane into a region of higher solute concentration, aiming to equalize the solute concentrations on the two sides.[1][2][3] It may also be used to describe a physical process in which any solvent moves, without input of energy,[4] across a semipermeable membrane (permeable to the solvent, but not the solute) separating two solutions of different concentrations.[5] Although osmosis does not require input of energy, it does use kinetic energy [6] and can be made to do work,[7]. 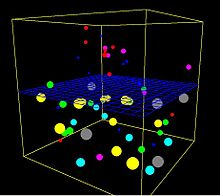 One frame of a computer simulation of osmosis

Osmosis is essential in biological systems, as biological membranes are semipermeable. In general, these membranes are impermeable to large and polar molecules, such as ions, proteins, and polysaccharides, while being permeable to non-polar and/or hydrophobic molecules like lipids as well as to small molecules like oxygen, carbon dioxide, nitrogen, nitric oxide, etc. Permeability depends on solubility, charge, or chemistry, as well as solute size. Water molecules travel through the plasma membrane, tonoplast membrane (vacuole) or protoplast by diffusing across the phospholipid bilayer via aquaporins (small transmembrane proteins similar to those in facilitated diffusion and in creating ion channels). Osmosis provides the primary means by which water is transported into and out of cells. The turgor pressure of a cell is largely maintained by osmosis, across the cell membrane, between the cell interior and its relatively hypotonic environment.[8]

When the membrane has a volume of pure water on both sides, water molecules pass in and out in each direction at exactly the same rate; there is no net flow of water through the membrane.

Osmosis can be explained by the fact that less concentrated solution contains more free energy, so solvent molecules tend to diffuse to a place of lower free energy in order to equalize free energy (and semipermeable membrane allows to pass only solvent molecules). This will result in a net flow of water to the side with the solution. Assuming the membrane does not break, this net flow will slow and finally stop as the pressure on the solution side becomes such that the movement in each direction is equal: dynamic equilibrium. This could either be due to the water potential on both sides of the membrane being the same, or due to osmosis being inhibited by factors such as pressure potential or osmotic pressure.

Additionally, particle size has no bearing on osmotic pressure, as this is the fundamental postulate of colligative properties.[15]

Osmotic pressure is the main cause of support in many plants. The osmotic entry of water raises the turgor pressure exerted against the cell wall, until it equals the osmotic pressure, creating a steady state.

When a plant cell is placed in a hypertonic solution, the water in the cells moves to an area higher in solute concentration and the cell shrinks, and in doing so, becomes flaccid. This means the cell has become plasmolyzed – the cell membrane has completely left the cell wall due to lack of water pressure on it; the opposite of turgid.

Also, osmosis is responsible for the ability of plant roots to draw water from the soil. Since there are many fine roots, they have a large surface area, and water enters the roots by osmosis.

In unusual environments, osmosis can be very harmful to organisms. For example, freshwater and saltwater aquarium fish placed in water of a different salinity than that to which they are adapted to will die quickly, and in the case of saltwater fish, dramatically. Another example of a harmful osmotic effect is the use of table salt to kill leeches and slugs.

Suppose an animal or a plant cell is placed in a solution of sugar or salt in water.

Essentially, this means that if a cell is put in a solution which has a solute concentration higher than its own, then it will shrivel up, and if it is put in a solution with a lesser solute concentration than its own, the cell will expand and burst. Electronucleal exchange is the passive diffusion of cations and anions across a semi-permeable membrane according to electrical charge.

Chemical gardens demonstrate the effect of osmosis in inorganic chemistry.

Usually the osmotic gradient is used while comparing solutions that have a semipermeable membrane between them allowing water to diffuse between the two solutions, toward the hypertonic solution (the solution with the higher concentration). Eventually, the force of the column of water on the hypertonic side of the semipermeable membrane will equal the force of diffusion on the hypotonic (the side with a lesser concentration) side, creating equilibrium. When equilibrium is reached, water continues to flow, but it flows both ways in equal amounts as well as force, therefore stabilizing the solution.

Reverse osmosis is a separation process that uses pressure to force a solvent through a semi-permeable membrane that retains the solute on one side and allows the pure solvent to pass to the other side. More formally, it is the process of forcing a solvent from a region of high solute concentration through a membrane to a region of low solute concentration by applying a pressure in excess of the osmotic pressure.

Osmosis may be used directly to achieve separation of water from a "feed" solution containing unwanted solutes. A "draw" solution of higher osmotic pressure than the feed solution is used to induce a net flow of water through a semi-permeable membrane, such that the feed solution becomes concentrated as the draw solution becomes dilute. The diluted draw solution may then be used directly (as with an ingestible solute like glucose), or sent to a secondary separation process for the removal of the draw solute. This secondary separation can be more efficient than a reverse osmosis process would be alone, depending on the draw solute used and the feedwater treated. Forward osmosis is an area of ongoing research, focusing on applications in desalination, water purification, water treatment, food processing, etc.