The action of the sodium-potassium pump is an example of primary active transport.

Specialized trans-membrane proteins recognize the substance and allows it access[1] (or, in the case of secondary transport, expend energy on forcing it) to cross the membrane when it otherwise would not, either because it is one to which the phospholipid bilayer of the membrane is impermeable or because it is moved in the direction of the concentration gradient. The last case, known as primary active transport, and the proteins involved in it as pumps, normally uses the chemical energy of ATP. The other cases, which usually derive their energy through exploitation of an electrochemical gradient, are known as secondary active transport and involve pore-forming proteins that form channels through the cell membrane.

Sometimes the system transports one substance in one direction at the same time as cotransporting another substance in the other direction. This is called antiport. Symport is the name if two substrates are being transported in the same direction across the membrane. Antiport and symport are associated with secondary active transport, meaning that one of the two substances are transported in the direction of their concentration gradient utilizing the energy derived from the transport of the second substance (mostly Na+, K+ or H+) down its concentration gradient.

Particles moving from areas of low concentration to areas of high concentration[2] (i.e., in the opposite direction as the concentration gradient) require specific trans-membrane carrier proteins. These proteins have receptors that bind to specific molecules (e.g., glucose) and thus transport them into the cell. Because energy is required for this process, it is known as 'active' transport. Examples of active transport include the transportation of sodium out of the cell and potassium into the cell by the sodium-potassium pump. Active transport often takes place in the internal lining of the small intestine.

Most of the enzymes that perform this type of transport are transmembrane ATPases. A primary ATPase universal to all life is the sodium-potassium pump, which helps to maintain the cell potential. Other sources of energy for Primary active transport are redox energy and photon energy (light). An example of primary active transport using Redox energy is the mitochondrial electron transport chain that uses the reduction energy of NADH to move protons across the inner mitochondrial membrane against their concentration gradient. An example of primary active transport using light energy are the proteins involved in photosynthesis that use the energy of photons to create a proton gradient across the thylakoid membrane and also to create reduction power in the form of NADPH. 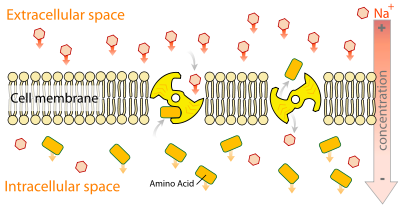 The two main forms of this are antiport and symport.

In antiport two species of ion or other solutes are pumped in opposite directions across a membrane. One of these species is allowed to flow from high to low concentration which yields the entropic energy to drive the transport of the other solute from a low concentration region to a high one. An example is the sodium-calcium exchanger or antiporter, which allows three sodium ions into the cell to transport one calcium out.

Many cells also possess a calcium ATPase, which can operate at lower intracellular concentrations of calcium and sets the normal or resting concentration of this important second messenger. But the ATPase exports calcium ions more slowly: only 30 per second versus 2000 per second by the exchanger. The exchanger comes into service when the calcium concentration rises steeply or "spikes" and enables rapid recovery. This shows that a single type of ion can be transported by several enzymes, which need not be active all the time (constitutively), but may exist to meet specific, intermittent needs.

An example is the glucose symporter SGLT1, which co-transports one glucose (or galactose) molecule into the cell for every two sodium ions it imports into the cell. This symporter is located in the small intestines, trachea, heart, brain, testis, and prostate. It is also located in the S3 segment of the proximal tubule in each nephron in the kidneys [5]. Its mechanism is exploited in glucose rehydration therapy and defects in SGLT1 prevent effective reabsorption of glucose, causing familial renal glucosuria[6].

Endocytosis is the process by which cells take in materials. The cellular membrane folds around the desired materials outside the cell.[7] The ingested particle becomes trapped within a pouch, vacuole or inside the cytoplasm. Often enzymes from lysosomes are then used to digest the molecules absorbed by this process.