The Cranberries rose to international fame in the 1990s with their debut album, Everybody Else Is Doing It, So Why Can't We?, which became a commercial success and sold over five million copies in the United States. The group was one of the most successful rock acts of the '90s and sold over 15 million albums in the United States alone. The band has achieved four top 20 albums on the Billboard 200 chart (Everybody Else Is Doing It, So Why Can't We?; No Need to Argue; To the Faithful Departed and Bury the Hatchet)[2] and eight top 20 singles on the Modern Rock Tracks chart ("Linger", "Dreams", "Zombie", "Ode to My Family", "Ridiculous Thoughts", "Salvation", "Free To Decide" and "Promises").[2]

After a six-year hiatus, The Cranberries reunited and began a North American tour, followed by dates in Latin America and Europe in early 2010.[3][4] The band recorded their sixth album, Roses, in May 2011, with a release due in 14 February, 2012.

In 1989, brothers Mike (bass) and Noel (guitar) Hogan formed The Cranberry Saw Us with drummer Fergal Lawler and singer Niall Quinn, in Limerick, Ireland. Less than a year later, Quinn left the band.[5] The remaining band members then placed an advertisement for a female singer. Dolores O'Riordan responded to the advertisement and auditioned by writing lyrics and melodies to some existing demos.[6] When she returned with a rough version of "Linger", the group hired her.[6]

After hiring O'Riordan, the band started recording a home-made demo tape, of which 300 copies were sold.[6] Changing their name to The Cranberries, the band sent another demo tape, which featured early versions of both "Linger" and "Dreams," to record companies throughout the UK.[6] The tape was recorded at the Xeric studios, which was run by Pearse Gilmore, who would later become their manager.[6]

The demo tape earned the attention of both the UK press and record industry and sparked a bidding war between major British record labels. Eventually, the group signed with Island Records.[6] The Cranberries headed back into studio with Gilmore as their producer to record their first EP, "Uncertain." The title proved to be prophetic as they did sound ill at ease, leading to poor reviews in the press. This led to tension between the group and Gilmore.[6] After a disatrous recording sessions intended for their first Island records album in January 1992, the band scrapped their work and fired Gilmore.[5] After hiring Geoff Travis as their new manager, The Cranberries headed back into studio in Dublin in March 1992 to re-start working on their first LP with Stephen Street, who had previously worked with The Smiths.[5]

During that time period, The Cranberries toured in Ireland and the UK, getting the attention of the British press. The band also recorded several studio and live sessions intended for Irish and British radio and television shows, including 2fm's The Dave Fanning Show and BBC Radio 1's John Peel Show.

After the release of a first single, "Dreams" in September 1992, The Cranberries proposed their debut album, Everybody Else Is Doing It, So Why Can't We?, in March 1993.[5] Neither the album nor the single gained much attention, nor did a second single, "Linger". When the band embarked on a tour supporting Suede, they then caught the attention of MTV, which put their videos into heavy rotation. Although "Linger" was first released in the UK in February 1993, peaking at 74, it was later re-issued in February 1994 peaking at 14. This was followed by Dreams (released again in May 1994, peaking at #27) which helped their debut album to reach #1 on the UK Album Chart,[7] becoming one of only five artists to ever achieve a re-rentry at that chart position.[5] After a North American and European Tour, O'Riordan married the band's tour manager, Don Burton, in July 1994.[6]

O'Riordan's position in the group continued to rise with the fall release of the group's second album, No Need to Argue. Boasting a slightly harder, more streamlined sound, yet still produced by Stephen Street, the record debuted at number six on the US charts and eventually outsold its predecessor. Within a year it went triple platinum, spawning the number one hit "Zombie" and the number 11 "Ode to My Family" on the Modern Rock Tracks chart.[2] In 1995, the band continued to tour, and released two more singles "I Can't Be With You" and "Ridiculous Thoughts". The album went 5x platinum in Canada, platinum in Switzerland, and seven times platinum in the United States.[8][9][10]

The band's heavier third album, To the Faithful Departed, failed to garner the same reception as its predecessors. On its spring release the album entered the charts, peaking at number 2 on the UK Album Chart and number 4 on the Billboard 200.[2][7] Despite favorable reviews, the album did not match the sales of No Need to Argue. The album only went double platinum in the US and Gold in the UK, which was considerably less than its two predecessors' which were certified seven times platinum.[8][11] The first single from the album was "Salvation" which peaked at number one on the Modern Rock Tracks chart.[2] The second single from the album was "Free To Decide"; the single's peak in the UK was 33.[7] During the autumn of 1996, the group cancelled their Australian and European tour, sparking another round of rumors that O'Riordan was about to launch a solo career. In november 1996 "When You're Gone" was released as a single in the United States, peaking at 22 on the Billboard Hot 100, thereby becoming the second single to chart on the Billboard Hot 100 from the album; the first was "Free To Decide".[2]

In 1999, the group released their fourth studio album Bury the Hatchet. The first single "Promises" was released in February. "Promises" would be the only single from the album to chart in the US and last single before their hiatus.[2] The album peaked at 7 in the UK and 13 in the US.[2][7] The album was certified gold in the US.[8] The second single from the album was "Animal Instinct", which didn't chart in the UK, although it did chart in France, Austria and many others.[12] The third and fourth singles were "Just My Imagination" and "You & Me", respectively. The band had a guest appearance on popular television series Charmed, performing "Just My Imagination" on the episode She's a Man, Baby, A Man! The group started a world tour in April 1999 and it finished in July 2000. It was the biggest and most successful tour of the Cranberries' career.[13]

The tour brought them back to Ireland for their first date since May 2000. They performed at Millstreet in County Cork. As the tour rolled on, the band released Bury The Hatchet – The Complete Sessions, a double CD featuring B-sides as well as live tracks taken from a live show in Paris.

In October 2001, the album Wake Up and Smell the Coffee was released. The band's old producer, Stephen Street, had returned and produced their new music video. The album peaked at 46 on the Billboard 200.[2] Its peak in the UK was #61.[7] The first single released from the album was "Analyse", which didn't chart in the UK but chart in US Adult Top 40 at 26 peak.[2][7] In January 2002, they released the second single "Time Is Ticking Out", and some months later another one, "This Is The Day". None of the songs charted.

The following year a greatest hits album was released entitled Stars - The Best of 1992 - 2002 which was released along side with eponymous DVD of music videos. The album peaked in the UK was 20.[7] The song "Stars" was released as a single from that album.

They started a European tour in mid October 2002, which ended in December of the same year. In mid 2003, the band played a few tour dates, some with the Rolling Stones (as opening act), and some alone. They performed two new songs during those dates ("Astral Projection" and "In It Together"), which were supposed to be released on the band's sixth studio album.

In September 2003, despite working on a new album,[14] the Cranberries announced they were taking some time to pursue individual careers. 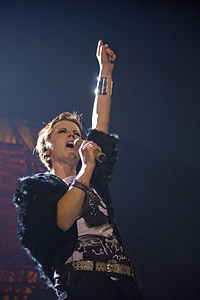 Since 2004 Dolores O'Riordan has been collaborating on a number of musical projects, before launching her solo career with the album Are You Listening? in 2007.

Noel Hogan started a new project called Mono Band, whose first full-length self-titled album saw a limited release in 2005. He went on to form Arkitekt with singer-songwriter Richard Walters.[15] He has also been working as a producer with Supermodel Twins, from his native Limerick and Remma. Fergal Lawler was a member of The Low Network, whose first album was released in 2007. He has also worked with Walter Mitty and the Realists[16] as well as The Last Days Of Death Country[17] as both producer and musician.

The Cranberries reunited in January 2009 "to celebrate Dolores becoming an Honorary Patron of University Philosophical Society (Trinity College, Dublin)". While the group indicated at the time that this did not signify an official reunion, things seem to have changed. On 25 August 2009 in anticipation of the release of her second solo album, No Baggage, O'Riordan announced that the Cranberries would be reuniting for a North American and European tour.[18] O'Riordan indicated that the band would be playing songs from her solo albums and a lot of The Cranberries classic hits as well as some new group compositions.

The Cranberries recorded Roses at the Metalworks Studios in Toronto (Canada) from 18 April[19] to 15 May[20] 2011 with producer Stephen Street,[19] who previously collaborated with the band on first, second and fifth albums. The Cranberries worked on 15 tracks during the Roses session, although not all will be included on the album.[21] The album is scheduled for release on 14 February, 2012.[22]