Wyrley and Essington Canal
For the restoration of the section Ogley Junction–Huddlesford Junction, see Lichfield Canal.

The Wyrley and Essington Canal, known locally as "the Curly Wyrley", is a canal in the English Midlands. As built it ran from Wolverhampton to Huddlesford Junction near Lichfield, with a number of branches: some parts are currently derelict. Pending planned restoration to Huddlesford, the navigable mainline now terminates at Ogley Junction near Brownhills.

The canal was built to allow transport of coal from coal mines near Wyrley, Essington and New Invention to Wolverhampton and Walsall, but also carried limestone and other goods. An Act of Parliament received the Royal Assent on 30 April 1792, entitled "An Act for making and maintaining a navigable Canal from, or from near, Wyrley Bank, in the county of Stafford, to communicate with the Birmingham and Birmingham and Fazeley Canal, at or near the town of Wolverhampton, in the said county; and also certain collateral Cuts therein described from the said intended Canal".[1]

As the act's name suggests, this authorised the construction of the canal from the BCN Main Line of the Birmingham Canal Navigations (which would not be known as such until 1794) near Wolverhampton to Wyrley Bank, and the raising of up to £45,000 to pay for construction. William Pitt was appointed engineer.

A second act received Royal Assent on 28 March 1794, entitled "An Act for extending the Wyrley and Essington Canal" – this authorised a long extension, from Sneyd (thus making the line from Sneyd to Wyrley Bank effectively a branch) past Lichfield to Huddlesford Junction on the Coventry Canal, together with the raising of up to £115,000 (£10,522,579 as of 2011),[2] to complete construction.[1] The 1794 Act also authorised a branch to the Hay Head Limeworks, which became known as the Daw End branch, and a short branch to Lords Hayes.

The canal, including the extension, was open throughout by 1797. In February 1840, the Daw End branch was linked to the Tame Valley Canal by the Rushall Canal which included 9 locks. The section from Ogley Junction to Huddlesford is now known as the Lichfield Canal and is derelict, having been abandoned in 1955, under the terms of an Act of Abandonment obtained in 1954. It is now the subject of restoration.

The Cannock Extension was a late addition, being authorised by an Act of Parliament in 1854, for the construction of a branch between Pelsall and the coal mining area of Hednesford, near Cannock. The Staffordshire and Worcestershire Canal built a flight of 13 locks to connect the new branch to their Hatherton Branch at Churchbridge, which were opened in 1860, and the Cannock branch reached Hednesford basin by 1863. Heavy coal traffic used the branch for its entire life, although the mines affected the canal. In July 1960, subsidence caused by mining resulted in the canal bed dropping by 21 ft (6.4m), and although the banks were rebuilt, the canal to the north of the A5 road was abandoned three years later. The Churchbridge connection had been abandoned in 1955, as traffic had ceased on the Hatherton Branch in 1949, again following subsidence. Most of the route north of the A5 has since been destroyed, some of it as a result of opencast mining.

In common with other canals in the Midlands, it was built as a "narrow" canal, that is, able to take narrowboat approximately 70 feet by 7 feet (21.3 metres by 2.1 metres).

The canal was lock-free from the Birmingham Canal mainline at Horseley Fields Junction for 16.5 miles (26.5 kilometres), after which there were 30 locks descending to Huddlesford over a further 7 miles (11.3 kilometres).

There was a connection to the Bentley Canal, which in turn connected to the Anson Branch and thence the Walsall Canal, but the former closed in 1961.

A number of branches were constructed:

The section of the original mainline from Sneyd to Wyrley Bank, later considered a branch, was opened in 1798, some 2.2 miles (3.6 kilometres) long with four locks; this was extended towards Great Wyrley in 1799, but the extension was disused by 1829. It was reopened and extended to reach Great Wyrley and serve the mines there in 1857. When completed it was 3.5 miles (5.6 kilometres) long, with major wharfs at Broad Lane, Landywood and Wyrley.[3] This branch was abandoned in 1955, under the powers of the Act of Abandonment.

The Essington branch, off the Sneyd to Wyrley Bank line, was opened in 1800, 0.7 miles (1.1 kilometres) long with five locks. It was the first section to be abandoned, (prior to 1904)[3] as its water supply was always inadequate.

The Daw End Branch from Catshill Junction to limestone quarries and limeworks at Hay Head was also opened in 1800, some 5.4 miles (8.7 kilometres) long with no locks. Over the years it has suffered from mining subsidence, with the result that many of the embankments are now much taller than when they were constructed. The 1954 Act allowed the final section to the limeworks to be abandoned. Surrounded now by Hay Head Woods, it is still partially watered, and the area has been declared a Site of Important Nature Conservation (SINC).[4] 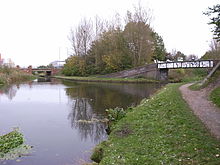 The Lord Hayes Branch was 0.9 miles (1.5 kilometres)[3] with no locks; this branch was built under the 1794 Act and abandoned under the 1954 Act. It is also referred to as the Lords Hayes or Lord Hay's branch. The branch could be restored, as it has been identified as a suitable route for the restored Hatherton Canal in a feasibility study carried out by Atkins. Previously a route to reconnect the Hatherton Canal to Grove Basin on the Cannock Extension Canal had been favoured, but met with opposition from landowners and on environmental grounds,[5] whereas the Lord Hayes route satisfies the environmental concerns, is preferable to landowners, and would reduce the number of new road bridges needed.[6]

The Anglesey Branch from Ogley Junction, built as a feeder in 1800 to carry the main source of water for the canal from Chasewater Reservoir, was upgraded to navigable status in 1850 as new mines opened in the area. Coal continued to be transported along the branch from Anglesey Basin until 1967. The end of this branch is the furthest north it is currently possible to travel on the Birmingham Canal Navigations.

There were three short branches at Gilpins, Slough and Sandhills, all of which are now abandoned.

The canal was bought by the Birmingham Canal Navigations in 1840.

The affectionate, rhyming, name "Curly Wyrley" is derived from the fact that the canal is a contour canal, and so it twists and turns in order to avoid any gradients, and thus the need for locks. Some of the bends have been straightened over the years, following mining subsidence.