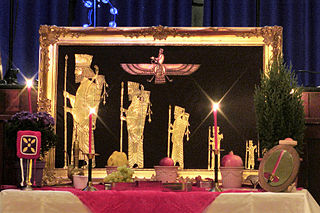 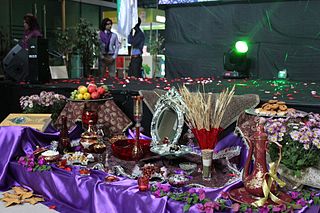 Mehrgân (alternatively: Mihragān, Persian: مهرگان) or Jashn-e Mehregân (Persian: جشن مهرگان) is a Zoroastrian and Persian (Iranian) festival [1][2][3][4] celebrated since the pre-Islamic era to honor the Yazata of "Mehr" (Persian: مهر), which is responsible for friendship, affection and love. It is also widely referred to as Persian Festival of Autumn. [5][6]

Mehrgan was once a Persian festival, and possibly even older, but what forms it then remains in the realm of speculation. By the 4th century BC, it was observed as one of the Zoroastrian name-day feasts, a form it retains even today, even in (predominantly) Islamic Persia where it is of the few pre-Islamic festivals that continue to be celebrated by the public at large.

As mentioned above, Mehrgān is a name-day feast. These name-day feasts are festivals celebrated on the day of the year when the day-name and month-name dedicated to a particular angel or virtue intersect. The pre-Islamic Persians (Iranians) had 30-day months, which means that each day in each month had a different name. 12 of the days are also names of the 12 months. The day whose name corresponded to the name of the month was celebrated. It was a celebration of life, the season, God, and joy.

Concerning Mehrgan, the Mehr day in the Mehr month also corresponded to the day farmers collected their crops. They thus also celebrated the fact God had given them food to survive the coming cold months. Today, only two of these name-day continue to have a wide following in (predominantly) Islamic Iran. These are Mehrgan, dedicated to Mehr, and Tirgan, dedicated to Tishtrya/Tir.

In Biruni's 11th century Book of Instructions in the Elements of the Art of Astrology (233), the astronomer observed that "some people have given the preference to Mihragān [over Nowruz, i.e. New Year's day/Spring Equinox] by as much as they prefer autumn to spring."[7]

As Biruni also does for the other festival days he mentions, he reiterates a local anecdotal association for his description of Mehrgan (ha al-mirjan in the author's Arabic parlance) with a fragment of a tale from Iranian folklore: On this day, Fereydun vanquished the evil Dahak and confined him to Mount Damavand. This fragment of the legend is part of a greater cycle that ties Mehrgan with Nowruz; Dahak vanquished Jamshid (who the legends have as the one establishing Nowruz or New Year's Day), and Fereydun vanquishes Dahak, so restoring the balance. The association of Mehrgan with the polarity of spring/autumn, sowing/harvest and the birth/rebirth cycle did not escape Biruni either, for as he noted, "they consider Mihragān as a sign of resurrection and the end of the world, because at Mihragān that which grows reaches perfection."[7]

Mehrgān was celebrated in an extravagant style at Persepolis. Not only was it the time for harvest, but it was also the time when the taxes were collected. Visitors from different parts of the Persian Empire brought gifts for the king all contributing to a lively festival.

During pre-Islamic and early Islamic Iran, Mehrgān was celebrated with the same magnificence and pageantry as Nowruz. It was customary for people to send or give their king, and each other, gifts. Rich people usually gave gold and silver coins, heroes and warriors gave horses while others gave gifts according to their financial power and ability, even as simple as an apple. Those fortunate enough would help the poor with gifts.

Gifts to the royal court of over ten thousand gold coins were registered. If the gift-giver needed money at a later time, the court would then return twice the gift amount. Kings gave two audiences a year: one audience at Nowruz and other at Mehregān. During the Mehregān celebrations, the king wore a fur robe and gave away all his summer clothes.

After the Mongol invasion of Iran, the feast celebration of Mehrgān lost its popularity. Zoroastrians of Yazd and Kermān continued to celebrate Mehrgān in an extravagant way.

For this celebration, the participants wear new clothes and set a decorative, colorful table. The sides of the tablecloth are decorated with dry wild marjoram. A copy of the Khordeh Avesta ("little Avesta"), a mirror and a sormeh-dan (a traditional eyeliner or kohl) are placed on the table together with rosewater, sweets, flowers, vegetables and fruits, especially pomegranates and apples, and nuts such as almonds or pistachios. A few silver coins and lotus seeds are placed in a dish of water scented with marjoram extract.

A burner is also part of the table setting for kondor/loban (frankincense) and espand (Syrian Rue seeds) to be thrown on the flames.

At lunch time when the ceremony begins, everyone in the family stands in front of the mirror to pray. Sherbet is drunk and then—as a good omen—sormeh is applied around the eyes. Handfuls of wild marjoram, lotus and sugar plum seeds are thrown over one another's heads while they embrace one another.

In 1960s the Postal Service in Tehran issued a series of stamps to commemorate Mehrgan Festival.

Basis for the date

As noted above, Mehrgān is a name-day feast. These name-day feasts are festivals celebrated on the day of the year when the day-name and month-name dedicated to a particular angel or virtue intersect. Indeed, Zoroastrian Persians before Islam had 30-days months, which means that each day in a month had a different name. 12 of the days are also names of the 12 months. The day whose name corresponded to the name of the month was celebrated. It was a celebration of life, climate changing, God, joy. In Zoroastrianism, happiness is really important and is considered as holy and must be attracted. Thus, this religion has always had many feasts and celebrations.

What that day corresponds to in another calendar is subject to which variant of the Zoroastrian calendar is followed:

The Bastani calendar is used primarily in Greater Persia and by Persians of the diaspora, while Zoroastrians of India (subject to calendrical faction) use one of the other three variants.

The relationship between Mehrgān and the various calendars is perhaps better understood relative to New Year's Day (Nowruz). When (relative to another calendar) the 1st day of the year occurs is subject to interpretation, but independent of when it occurs, Mehrgān is celebrated 195 days after that, that is on the 196th day of the year.